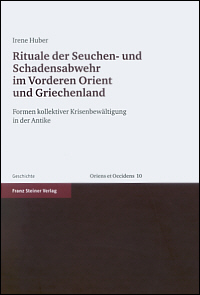 This revision of a 2000 Innsbruck thesis offers a challenging new perspective on the history of medicine in the ancient Near East and the Aegean. The author looks at the range of public responses to major crises such as epidemic disease, drought and famine. She is less concerned with actual explanations than with the varied forms of crisis management, and especially the rituals that communities used to deal with disasters. These could be political, social, medical or religious, and, as is often pointed out, ancient actors regularly elided these modern categories. Famine and epidemics have often invited different responses from more personal disasters, such as an individual illness, not least because the question of individual susceptibility or responsibility is minimised. It is harder to ask 'why me?' when all around are succumbing to the same crisis, and merely to change the pronoun to 'why us ?' is often an important step. Looking at natural disasters in this way avoids some of the relatively sterile debates about the nature of the plague of Athens or the origins of contagion theory by placing them in a wider context.

It is a context that gains in richness from embracing several cultures. The author compares rituals in Babylonian, Hittite, Hebrew and Greek texts, with occasional glances at Egyptian material. In this she continues a recent trend, inspired most notably by Walter Burkert, to look for traces of survivals of a common Near Eastern culture in a Greek world that ostensibly rejected them. Her arguments are more sophisticated and more firmly based than those of the American-based Hector Avalos, whose Illness and health care in the Ancient Near East (1995) covers much of the same ground. They can be usefully compared with the discussions of similar phenomena in Manfred Horstmanshoff and Marten Stol, Magic and rationality in ancient Near Eastern and Graeco-roman medicine (2004).

The author operates with a neat grid of categories that are intended to encapsulate most forms of ritual: substitution; a mythical killing of a member of the community for the good of the rest; elimination (often in the form of an animal or human scapegoat); evocation of relevant gods; removal of the taint through purification; and prophylaxis (erection of statues of gods, the wearing of phylacteries). Within each category, she looks for examples drawn from different cultures. Her choice of examples is excellent, ranging from healing tablets to Greek tragedy, and from medical writings to legal and religious texts, and, when I have checked her sources, she is generally accurate. Often they show a range of similarities that leads to the conclusion that there was substantial contact between the Greek world and the Near East.

More challenging is her suggestion that, in times of crisis, many communities called on wandering priests who transmitted their rituals to areas where they rituals were unfamiliar. That there were wandering priests in Classical Greece is well known, but that they brought with them Babylonian rituals (or even reminiscences of bygone ages) is far from clear, cf. Geoffrey Lloyd, in the grip of disease. Studies in the Greek imagination (2003). There may well be very close parallels between the cult of Black Demeter in Arcadia and the Babylonian cycle of Telipinu, just as Burkert saw similar parallels between a cult on the island of Samos and those of Babylonia, but to interpret them always as relics of a common East Mediterranean culture may be to go too far. Cults such as Apollo 'Warder off of Evil' could have developed spontaneously without outside intervention. Furthermore, even if a Near Eastern origin is conceded, it is not at all obvious what this tells us about its practice in the fifth century B.C., when its devotees thought that they were worshipping a purely Greek deity. One can allow that, at some unspecified point in the distant past, there were shared forms of ritual, but one needs to be more specific than the author is here about the mechanics of that cultural transfer. After all, the island of Samos, just off the mainland of Asia Minor, is likely to have had more frequent and varied contacts with the inhabitants of the interior than the inhabitants of Arcadia, in the middle of the mountainous Peloponnese. This is not to deny the possibility, but merely to point out that the author is never precise about the date at which these transfers occurred.

Interestingly also, she deliberately avoids all reference to similar rituals in Rome, despite the existence in Livy's History of Rome and authors like Julius Obsequens of details of the role of religion in 'crisis management' that are far superior to those for any Greek city, even Athens, see Jason Davies, Rome's religious History, 2005. Since many of them are very similar to those described in this book, they present a problem of interpretation that the author does not face. If the similarities are not to be considered significant, then there is no reason, except an a priori argument, to believe that all (or even most) of the similarities found in Greece must derive from the Near East. If the Romans could devise their own rituals, why not the Greeks? Alternatively, if Roman rituals are regarded as significantly parallel to those of the Babylonians or Hittites, the concept of a Near Eastern community has to be considerably extended to parts of Italy. While one can trace Greek influence on several Roman cults in the Late Republican period, and possibly even in early Rome, this explanation does not work for all cults, especially those that originated in the central Appennine mountains.

Given this deliberate omission of Roman ritual, it is odd to find much space given to a discussion of rituals against plague in Asia Minor in the 160s C.E., when that part of the Greek world had already been under Roman hegemony for three centuries. To use this as evidence for a 'prehistoric' ritual is problematic, to say the least, given the growing syncretism of cults in the Roman world. Fridolf Kudlien's study of the role of 'confession' in ancient healing, Beichte und Heilung, Medizinhistorisches Journal13 (1978), 1-14, and Angelos Chaniotis' exposition of the so-called Lydian healing tablets, 'Illness and cures in the Greek propitiatory inscriptions and dedications of Lydia and Phrygia', in Philip van der Eijk et al., Ancient medicine in its socio-historical Context, 1995, 323-44, are at least as relevant to the discussion, even if they are often focussed on 'private' responses.

This too may be the reason why the author says almost nothing about Asclepius cult, despite good evidence that links its spread in Greece, at least chronologically, with the aftermath of the Thucydidean plague. It is true that its introduction to Athens is often portrayed as an individual initiative, but at the very least that required the formal consent of Athens' religious authorities, and the cult very soon operated as a public cult, supported and used by the city. Given that so many details are known of Asclepius cult in 5th and 4th century B.C.E. Greece, its omission, except in relation to the Antonine plague, is curious. But there are other cults, notably those of Apollo and Hercules, that had a broader public involvement in times of crisis than is here indicated. The great temple of Bassae was erected by the town of Phigaleia to Apollo the Bringer of Help around 425 B.C.E., according to Pausanias, in response to the arrival of plague. The Athenian purification of Delos, and refurbishment of the shrine of the daughters of Leto, who had centuries before delivered Athens from plague, should also have been considered. The fact that the book was completed largely by 2000 explains why the author did not take issue with the arguments of Gorrini and Melfi, Kernos 15, 247-265, that the archaeological evidence for healing cults is extremely scanty before the 420s B.C.E. A new development, or the consolidation of more 'informal' rituals of wandering priests ?

These comments are less to be taken as criticisms of the author than as warnings of the difficulties involved in cross-cultural, and cross-linguistic, explorations, where, inevitably, the weight that each scholar puts on similarities and parallels reflects presuppositions about the wider picture. Some see influences, where others see parallel independent developments, both may be right in some instances, and wrong in others. 'Near-Easterners' need to be more precise about the way in which this transmission of rituals took place (and, also, when); the Hellenophiles must explain why a posited development could not have taken place.

I have learned a great deal from this book, even if its major theses require refinement before they convince me totally. It poses major questions, and challenges our wider understanding of the development of what were thought to be Greek attitudes to disease. Above all, it makes clear how, in the various cultures here studied, crises caused by epidemic disease and those caused by dearth evoked very different collective responses. It may be that, as the author argues, what we might think of as subsistence crises were viewed as, if not normal, at least comprehensible, and similarly with a range of common illnesses. But an epidemic disease, striking widely and at random across a whole community, called forth very different strategies, at a public as well as a private level. What these strategies were, one can learn very well from this book, which opens up many new perspectives on what was once thought to be an entirely Greek medicine.