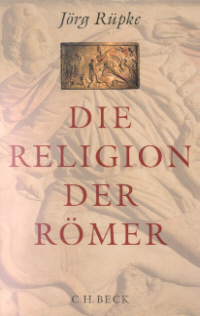 Rüpke is one of half a dozen figures who currently dominate the study of Roman religion. His introductory synthesis does not disappoint. Written more for students of comparative religion, it is not a book for the absolute beginner. It is, however, neither obscure nor difficult (for those whose first language is not German, Rüpke writes easily and clearly), but challenging and stimulating at every turn; one of its merits is, from the start, to make the reader think about or rethink Roman religion (starting with the very language of religion, ancient and modern). Thus the pax deorum is for Rüpke the normal state of affairs between men and gods: mutual non-intervention, to which the exception is contact with the divine for particular purposes, in defined situations, carried through very precisely and punctiliously (perhaps a reflection of the scrupulous pleonasm of legal language?). Further, the prescribing of fields in which contact happens creates a distancing effect between gods and men (80-81). Similarly, note the extended metaphor by which Rüpke seeks to express the 'obviousness' (Selbstverständlichkeit) of Roman religion in the first chapter: eating. We do it every day without often thinking about it, yet it is extremely important; it can be very simple, it can be very elaborate and ritualised; it can constitute a form of specialist knowledge and has generated its own literature; the ways in which it happens can be seen as reflecting aspects of our own society. This book thus has much for those familiar with the topic, as well as relative beginners. In this respect it carves its own niche in a world well-populated by standard text books, surveys, and introductory studies.

The emphasis throughout is on the synthetic, with much of the material drawn from the imperial era. A rival volume (M. Beard / J. North / S. Price, Religions of Rome, vol. I, Cambridge, 1997) begins with three chronologically structured chapters running from the archaic period into the early Empire. By contrast, only in his second chapter does Rüpke give the reader a glimpse of religious change over time (the final chapter on religious developments under the empire is equally brief). He takes a sceptical but original view of republican religious history, especially touching its periodization (59-61), but some ideas are under-developed. As to the possibility of knowing anything about the period before 300 B.C. from literary sources, Rüpke is Belochian in his scepticism (yet oddly unsceptical when using the concept of the gens, where unfounded assumptions proliferate). The emphasis on the value of archaeological evidence here and elsewhere is salutary, but also often frustrating. On Latial burial ritual, Rüpke enumerates the interesting questions which archaeology can now ask (54-55); but the reader is not told how archaeology has answered them. Again, presumably Osteria dell'Osa is meant when Rüpke talks of gentilicially-organised grave groups in concentric circles: he writes as if there were such graves in Rome (there are not), and it is not clear that there were any at Osteria dell'Osa either.

The meat of the book is the eight chapters between the two chronological sections, dealing thematically with the boundaries between human and divine, religious actions and rituals, myth and theology, sacrifices and banquets, prayer, space and time, and specialist priesthoods (this list is not exhaustive). Readers will find a judicious mix of thematic approaches and structural analyses, built up in paratactic fashion to form a rich account. Some two dozen or more (often) long citations from epigraphic and literary texts allow students to confront important primary material and consider its implications; there are also 24 well-chosen illustrations, with full and informative captions. Both thematic and chronological sections are pleasing interlarded with clear and authoritative descriptions, brief but useful, of what actually happened in a wide range of religious and cultic situations, as in temple vowing and dedication (34-35).

For Rüpke, any study of Roman religion must encompass the full variety and complexity of Roman society. Thus he does not privilege 'public' over other forms of worship (although he recognises its ability to integrate diverse forms of religious activity, through the calendar for example - "die Polis-Religion überlagert alles", 24-25), whether domestic cult or membership of particular cult associations. He rightly sees private cult associations as competing with public ones, sacra publica, for attention (but membership of an association did not exclude attachment to domestic or 'public' cult).

Although ancient writers might attempt to describe what a religion was like, Rüpke suggests that how it looked to the (prospective) worshipper in a particular place was more important than the abstractions of dogma or its relative appeal (26-27); hence local variations, difficult to find in the sources, are significant. Difference could also be a problem. Perceptions of which cults were and which were not permitted religions were not objectively underpinned by religious principles or theological debate, but by subjective criteria of threat, and political circumstance; there was no list of what was permitted, and thus no 'black list' (41-42).

Another theme of the book is how religion reflects the organising principles of Roman society. To this end we are constantly given reminders of its almost epiphenomenal relationship to political and social phenomena. An example is the so-called 'private deification' found among rich upwardly mobile freedmen; see Abb. 4 from the tomb of the Haterii, where Rüpke draws attention away from the crane for which this illustration normally attracts scholarly attention, and back to the religious implications of the monument being constructed. Rüpke also reminds us how this process is cognate with 'ruler cult': making men into gods is "an integral possibility" in Roman polytheism (84-85).

The comparative element is a valuable feature of this work. Greek religion is often usefully invoked. For example, Roman deities, in contrast to the Greek, are more commonly depicted with stereotypical attributes, rather than as idealised beings, the attributes referring to significant actions. Rüpke notes that such oppositions do not themselves explain everything, but rather particular Roman explanations need to be sought for Roman practice. He is almost as interested in the study of religion as he is in religion itself (Rüpke considers Varro, himself not a priest [63-65] not as an interpreter of religion comparable to modern scholars, but as a part of religion through his explanations of it, part of the object of enquiry, 80). He draws out interestingly how approaches to religion have been implicated in assumptions often rooted ultimately in the Enlightenment, for example the idea of the original indigenous purity of Roman religion, which declined once its isolation ended and new arrivals came on the scene (62, 69, 76, 80, 86-87 et cetera): one might have hoped this would formed a chapter to itself.

Rüpke is also very good on the structural thinking which underpinned the conception and operation of religion in Rome. Some ideas which emerge from just one chapter, on men and gods, may be taken as typical. Abstract deities, or the ideas they divinize, have been considered as reflecting upper class value systems (61), but also allow at a conceptual level discussion of human relations and virtues; others, including the Sondergötter - special gods, found more in texts than in ritual, reflect human activities such as agriculture, or procreation, birth, marriage. Rüpke is surely right that the use of religious symbols in these areas finds a basic explanation at the level of managing complex or risky actions (he rejects the enlightenment / modern discourse of 'religion versus magic' here, 79-80). For Rüpke, reflections on the gods are reflections about power (77). He is always aware of the importance of explaining our evidence sociologically (neither simplifying nor forcing the interpretation), in terms of a 'grammar' which is historically contingent and grows entwined in the evolving structures of Roman society. Hence the assertion that thinking about the gods was thinking about power is explicitly qualified as something which must be sought in Republican conceptions of power and prestige as tied to the proper conduct of the res publica in office (even down to seated cult statues and curule chairs from magistrates).

All in all this is a thoughtful and thought-provoking volume, which commends itself to all students of Roman religion by its clarity, range, good sense and sheer interest.