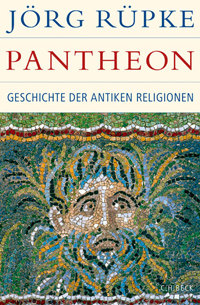 This major synthetic opus, by one of the most the distinguished historians of Roman religion active today, appears in the Historische Bibliothek der Gerda Henkel Stiftung, a series which already includes a number of important studies of central historical questions. Beyond his disciplinary attention, Rüpke belongs to the rather small group of scholars seriously interested in the comparative and phenomenological study of religious phenomena, as well as in the theoretical and methodological issues this study involves. In many ways, the book presents a digest of many of the problems that have occupied the author's mind in the last few decades. This obvious advantage permits the author to approach the problems he tackles with great authority, in a prose at once precise and elegant. Rüpke, indeed, insists that his goal is to tell a story - and he fully succeeds in this task.

The book's spectrum is very large. Chronologically, it goes from the early Iron Age to late antiquity, dealing, roughly, with the first millennium B.C.E. and the first half of the first millennium C.E. When Rüpke writes that he wants to tell a story, he means he is more interested in "lived religion" (gelebte Religion) and in transformations than in systems. His main goal is to understand how religions function and evolve. The main transformation of religion, according to him, is the passage from a world of religious practice (in early Rome and in the early Greek cities) to one in which people belong to a religion. In the Roman Empire, religion would now be defined as a network of communities: for the first time, religions would be defined as entities conscious of their boundaries. In a sense, adds Rüpke, those who claim that religion, as we know it, was created only then (a position rather fashionable today) are right. The birth and growth of Christianity is to be perceived, then, more as the result than as a factor of this deep transformation

For Rüpke, religion represents, first of all, an expression of communication, that is to say a system of signs and symbols in which messages are always encoded. It is communication that creates a community. Religious communication, in this sense, creates a new reality. It represents, to use terms dear to the philosopher John Austin, performative speech. Communication, encoded signals, permits symbolic interaction. It is not only 'done', but defines the community (see for instance the case of prayer).

Having defined the boundaries of his investigation, the author deals in turn with religious infrastructure, with religious practices, with the actors, with the impact of reading and writing on religion, with the 'doubling' of religion in the Augustan period. Then he deals in a series of chapters with "lived religion", with new gods, experts, communities, both imagined and real, and with the communities' boundaries. One of the serious methodological difficulties with the earlier periods, at least when one focuses on Italy, is the lack of written sources. One must here make the most of the archaeological evidence - and Rüpke does that remarkably well. Later, the formation of "textual communities" becomes a central aspect of the transformation of religion. Gnostic communities, side by side with Christian and Jewish communities, represent here an important instance of "textualized" religion.

The Epilogue summarizes the impressive trajectory followed throughout the book's chapters, from a world in which religion was first and foremost action into one in which religions meant knowledge. The new roles played by religious texts, and the new dimensions of religion stemming from the revolution in writing technologies (in particular the passage from scroll to codex) represent here an essential dimension of a phenomenon recognized, but not fully analyzed by the author.

Rüpke knows a great deal, has a theoretical bent, and casts his net wide. He can legitimately claim that he does not want to deal with religions and cultures of which he does not have first-hand knowledge. In this book, the religions of Egypt, Israel, and the Near East in general are dealt with only insofar as they impact upon Roman religion. Rüpke writes, first of all, as a historian of Roman religion. This entails some limits to the large scope of the investigation. For this reviewer, at least, the author's disciplinary anchor was felt in all the book's chapters. Although he sought to write a global history, most of the author's examples are taken from ancient Italy or from Roman (or Greek) sources. There is, at least in German, a fundamental ambiguity in the term "Antike". It might refer either to what was traditionally considered as "the ancient world", i.e., that of Greece and Rome, or to the ancient world in general, which includes, at least in the Mediterranean and Near East, Egypt, Mesopotamia, and the lands and cultures of the Bible. For me, "antike Religionen" means all the religions of those areas.

The book's title had led me to expect a singlehandedly effort, by one audacious scholar, to present a masterful essay on the history of religions in the ancient Mediterranean and Near East - one, let's say, that would have had the scope of Sarah Iles Johnston, ed., Religions of the Ancient World: A Guide (Cambridge, Mass., 2004). It would have been very useful to see how a scholar having spent most of his career on studying polytheist or "pagan" systems and people approaches the study of monotheistic systems (the few remarks Rüpke makes here about Judaism, Manichaeism and Christianity cannot really amount to such an effort). Understandable as it is, Rüpke's decision to stick to what he knows best is regrettable. The author, rightly, wants to open new vistas to the study of ancient religions; at the same time, he sticks to some extent to the traditional division between polytheistic and monotheistic systems, a division seriously undermined by recent research.

The history of Roman religion and of its transformations in the broad Mediterranean context, over one and a half millennium, is in itself a major achievement, and one should be grateful to the author for having dared - and succeeded - to attempt it. The approach, insisting on how the different religious actors lived religion and were the agents of its transformations, is refreshing, and will provide a model for other similar studies starting from different viewpoints.