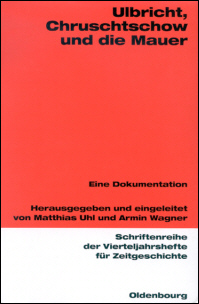 Matthias Uhl and Armin Wagner have written a very clear and engaging introduction to a fascinating set of documents on the building of the Berlin Wall. At the end of the book they provide a useful chronology of events in 1961 related to securing the GDR borders and a thorough bibliography.

In the years since the fall of the Wall and the end of the Cold War, scholars have gained access to a treasure trove of documents from former communist regimes. These documents have enabled them to fill in many missing pieces in our understanding of the cold war and some of its seminal events, such as the building of the Berlin Wall. Uhl and Wagner have studied documents from archives of the former East German party, military, state and Stasi, the former Soviet party, state and economics ministry, the former West German "Bundesnachrichtendienst", and the U.S. National Security Archive, the largest repository of declassified U.S. governmental documents. They have also built upon the work of others on the Berlin Wall. As befits Uhl and Wagner's expertise as military historians, the strongpoint of their documentary collection is military documents, especially from the GDR, but also from the USSR.

Included in the collection of documents are East German military, political and Stasi preparations for closing the border around West Berlin, GDR-USSR military and political consultations prior to 13. August, Soviet Defense Ministry reports to the CPSU ZK on the situation in Berlin and Germany in the days and weeks after 13. August and surrounding the Checkpoint Charlie crisis in October, and East German military reports and measures to maintain security and battle-readiness after 13. August.

They make it clear that throughout the 1950s, East Berlin developed plans to cut off West Berlin, to stop the "Republikflucht" and to get Soviet support for these actions. As they point out, Soviet leader Nikita Chruschtschow's launching of the Berlin Crisis with an ultimatum to the West in November 1958 gave East German leader Walter Ulbricht an excellent chance to continue his pressure on West Berlin. While Chruschtschow ultimately agreed to Ulbricht's pleas to close the border around West Berlin, he decided not to put more power in Ulbricht's hands by signing his threatened separate peace treaty with him. Uhl and Wagner observe that Ulbricht's aggressive tactics in Berlin cost him Moscow's sympathy.

There has been much speculation over the years about when exactly and by whom the decision was made to close the border around West Berlin and then to build the Berlin Wall. Given the time necessary to adequately prepare for these measures, previous hypotheses that the decision was made at the 3.-5. August 1961 Warsaw Pact meeting have been rather dubious. Uhl and Wagner's documents demonstrate that the East Germans in fact began to develop specific plans in October 1960 to close the border. These plans remained unknown to the Soviet KGB at the time. In fact, it is still not clear when the Soviet leaders actually learned of East German preparations to close off West Berlin. In the fall of 1960, the Soviet leaders remained opposed to any changes at the border in Berlin and would only change their minds in the summer of 1961.

In 1960, Chruschtschow was putting considerable energy into increasing Soviet military expenditures and preparedness. He relied on growing Soviet military strength and his hoped-for summit with the new U.S. President Kennedy to achieve a settlement in his favor in Berlin. He favored these approaches to any unilateral behavior in Berlin on Ulbricht's part. Yet Ulbricht continued his plans for sealing off West Berlin, and in early 1961 began to inquire under what conditions he could get help from the Group of Soviet Forces in Germany if there were a crisis in the GDR. By late April / early May, Soviet military forces began preparing for an escalation of the Berlin Crisis, while Chruschtschow continued to tell Ulbricht not to act unilaterally on the border in Berlin.

At some point after the failed June 1961 summit in Vienna between Chruschtschow and Kennedy, the Soviet leader gave Ulbricht the go-ahead to close the border, although the exact date is still not known. By mid-July there were concrete plans to close the border and clear coordination between the GDR and USSR military forces, with the USSR taking over the strategic leadership of the border closing process. On 27. July Soviet and East German top military leaders had developed the plan to close the border. In a private meeting with Ulbricht in Moscow on 3. August, just before the Warsaw Pact meeting on that day, Chruschtschow set 13. August as the date to close the border. Ulbricht shared the decision with the SED Politburo on 7. August, and the Politburo issued more detailed instructions on 11. August. Uhl and Wagner point out, however, that it remains unclear who decided and when that there should be an actual wall at the border around West Berlin, instead of just barbed wire and guard posts. They do present evidence that Stasi chief Erich Mielke and Defense Minister Heinz Hoffmann preferred barbed wire to a concrete wall, arguing that wire was more durable and would make it easier to catch people (barbed wire, unlike a wall, would not cast shadows that would-be escapees could hide in). Ulbricht, however, argued that it would be much harder for people to break through a wall than through barbed wire. We still lack documentary evidence concerning the initial Soviet stand on this issue.

Worried about how the East German people would react to the border closure, and aware of the 17. June 1953 precedent, the Soviets sent extra troops to key East German towns to keep order. The East German and Soviet leaders were surprised that there were any successful escapes after 13. August and responded by focusing on more effectively sealing off the border in places where people had escaped. Thus, it is quite clear that the border measures were directed toward preventing East Germans from escaping and not really toward preventing a West German attack, in spite of the official GDR name for the Berlin Wall: the anti-fascist protective barrier.

Most of the documents in the collection deal with developments after 13. August. The documents show that Marschall Ivan Konew, Supreme Commander of the Group of Soviet Forces in Germany (GSSD) at the time, called for using lethal weapons against escapees, but that he and Ambassador Michail Perwuchin then protested many times to the GDR leaders that border guards were shooting too quickly and were thus provocative. The Soviet leaders also held the East Germans responsible for the Checkpoint Charlie crisis in October, leading Chruschtschow again to put off his threats of signing a separate treaty with the GDR which would have given Ulbricht more power.

Uhl and Wagner provide several reports sent by the Soviet military leaders to the Soviet political leaders describing the situation in Berlin and the GDR in the months after 13. August. These reports include surveys of U.S. military movements in Berlin, Germany and the world. There are also GDR military reports detailing the process of increasing and restructuring forces to guard the newly sealed borders with the West, as well as reports of the first refugees shot dead by East German border guards.

One question that scholars have not yet been able to answer with documentary evidence is addressed in a tantalizing way in Document 46: were there contingency plans (and what did they entail?) for Western efforts to stop the border closure? Interviewed after he escaped to the West, former NVA regiment commander, Martin Herbert Löffler, said he had gotten no instructions on what he should do if conflicts arose over the sealing of the border. The West, of course, did not act to stop the erection of the barbed wire or the Berlin Wall, so the GDR and USSR did not need to enact any contingency plans, but it still would be interesting to know whether they had any.

In January 1962, the Soviets were satisfied that the West had accepted the border closure and were not going to undertake measures against it. The Soviets thus took their units in the GDR out of a state of heightened preparedness.

Uhl and Wagner's book gives readers a very real feel especially for the military decisions concerning the GDR's borders with the West between July and December 1961. It is a valuable contribution to the literature on the Berlin Wall and on East German and Soviet military policies in particular.