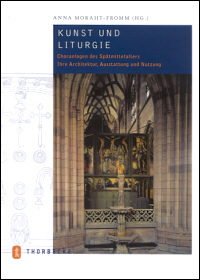 The Gothic cathedral is not, one might say, what it used to be. For scholars of previous generations, the building was notable for what it represented: to Otto von Simson and Erwin Panofsky, it was the ethereal embodiment of light metaphysics or Scholastic thought, while to Jean Bony it was a lofty shell of pure form. If, as Willibald Sauerländer noted ('Mod Gothic', New York Review of Books 31, no. 7 (Nov. 1984), 43-45), modernist aesthetics formed the lens through which earlier interpreters viewed their subjects, the current generation presents them more as the interactive installations and environments of postmodern art and virtual reality. In many recent publications - Andreas Köstler's "Die Ausstattung der Marburger Elisabethkirche: Zur Ästhetisierung des Kultraums im Mittelalter" (Berlin 1995) and Stephen Murray's digital Amiens Cathedral project (http://www.learn.columbia.edu/Mcahweb/index-frame.html); the essays in "Artistic Integration in Gothic Buildings", edited by Virginia Chieffo Raguin, Kathryn Brush, and Peter Draper (Toronto, 1995) and "Heiliger Raum: Architektur, Kunst und Liturgie in mittelalterlichen Kathedralen und Stiftskirchen", edited by Franz Kohlschein and Peter Wünsche (Münster, 1998) - the church appears a multimedia extravaganza, with visitors' movements orchestrated by screens, tabernacles, and altarpieces, their vision directed by the glitter of mobile liturgical paraphernalia, and their ears filled with the sound of highly stylized social performances.

It's an exciting place, the new Gothic building, and the contributors to this book - the result of a 2001 conference in Blaubeuren on "Kunst und Liturgie im Spätmittelalter" - do much to enrich and substantiate our understanding of it. The volume's subject matter is at once broader and more limited than its title suggests: "art" is limited to works in or associated with late Gothic church choirs, mainly in German-speaking lands, and "liturgy" seems defined very broadly as the human activities that take place therein. The methodology is largely art historical rather than text-based, so that rather than learning details of what was said or done during specific rites, we learn much about the spaces in which these rituals were performed, and how the objects and images located there structured the perceptual and conceptual experiences of historically located, embodied viewers.

These experiences appear to have been defined chiefly by the dialectic of concealment and revelation inherent in the enclosed choir. Christian Freigang (59-83) describes a densely orchestrated arrangement of images in various media around the choir of the abbey church at Brou, pointing out the meaningfully circumscribed views ducal patrons gained through windows in their private oratories and the framing devices that structured memorial practices for monks in the choir. Through shifting sightlines that collapsed distance by aligning spatially discrete objects, the view from outside the choir was no less charged than that gained more easily from inside. This was also the case (or so one hopes) for the Dominican nuns of St. Catherine's church in Nuremberg, the focus of Gerhard Weilandt's study (159-87). Although the church no longer stands, Weilandt's discovery of the 1436 account book of the convent custodian allows him to trace in remarkable detail the nuns' use of its liturgical space. For these women, participating in mass from an elevated gallery at the church's west end, the high choir was notable chiefly as an absence, obscured from their view by a wall. Throughout the liturgical year, altarpieces in the gallery were closed and opened, statues veiled and unveiled, candles lit and extinguished, supplementing the nuns' largely aural apprehension of the mass through a rich, interactive material environment. Whereas Weilandt uses a text to reconstruct lost viewing experiences, Uwe Albrecht does so by pulling together the scattered remnants of the choir ensemble of the parish church of St. Mary in Lübeck (113-39). This included a sculpted and gilded retable of very fine quality, a double-sided choir screen enhanced with paintings and sculptures, carved choir stalls, and an astronomical clock, comprising a lavish, densely integrated visual spectacle whose almost wholesale destruction in modern times is all the more lamentable.

If the latter two essays accentuate the sad contrast between the once rich visual culture of these churches and its loss today, others highlight the tension between the visible and the unseen that lent late medieval objects and images meaning beyond their representational content. Citing a series of manuscript illuminations that situate events from sacred history within "modern" ecclesiastical structures, Johannes Tripps (189-206) shows how many seemingly iconic wooden sculptures of Christ and the Virgin originally functioned as players in ritual narratives, ascending and descending from vaulted ceilings at moments of liturgical revelation. Achim Timmermann (207-30) reveals monumental sacrament-houses to have been no less interactive for their physical immobility, calling attention to their paradoxical ability to proclaim the presence of the Eucharist through their sheer physical scale while concealing it from view through their dizzying formal complexity. By contrast, the subjects of Jörg Rosenfeld's investigation (253-339), the painted reverse sides of northern retables, present themselves only to those viewers who inhabit the hidden space behind the altar. Although the motivations for a viewer's presence here remain obscure - perhaps involving rites of confession and reconciliation, or relic processions - the fact that these surfaces were so often decorated with Passion scenes and donor images, as well as artists' signatures, indicates that they played a role both in devotional practices and in the cultivation of individual and collective memory.

Medieval practices of commemoration feature prominently throughout the volume. Stefan Heinz and Wolfgang Schmid, in their quantitative study of archiepiscopal burials in Rhenish cathedrals (231-52), reveal that the privileged loci for interment were not the closed liturgical choirs but more publicly accessible areas such as aisles (Trier), nave piers (Mainz), and ambulatory chapels (Cologne). These had the dual advantage of rendering the deceased visible, and thus memorable, to a greater number of visitors and of proclaiming to those visitors the collective power of the institution. By contrast, the family chapels discussed by Antje Heling (141-57), attached to the choirs and naves of north German parish churches, testify to the "increased privatization of the liturgy in the late Middle Ages." With these discrete rooms, embellished with wall paintings, sculptures, and altarpieces, lay families and confraternities laid claim to the forms as well as functions of larger enclosed choirs, ensuring the maintenance of their memories within a carefully calibrated visual environment. In English parish churches, the focus of Richard Marks's essay (31-58), it was the memory of the church's titular saint that was materialized in sculptured form, both for the sake of individual devotions and for the cultivation of collective identity. Like some of his German colleagues, Marks is dealing with once-central images that no longer exist; nonetheless, he is able to show how rich their meanings were in the context of the church space, and how thoroughly they inflected their surroundings in the context of liturgical, paraliturgical, and secular activities.

As Marks reminds us, the distinction between nave and choir was quite fluid in parish churches; the situation was different in the large mendicant churches described by Georges Descoeudres (11-30), which needed completely separate spaces for lay congregants and religious communities. With the growth of mendicant orders in the later thirteenth century, he shows, choirs were significantly enlarged in many churches and cordoned off from the nave by increasingly solid and elaborately outfitted screens. The connection, implicit in this essay, between movements of monastic reform and the construction, renovation, and expansion of abbey churches is examined in closer detail by Immo Eberl (85-99), who traces such ties back into the eighth century and calls for deeper studies of the liturgical motivations for architectural change. This approach, however, is problematized by Felix Heinzer (101-11), whose analysis of liturgical documents related to Blaubeuren abbey suggests that, at least in this case, liturgical reforms affected architectural space far less than they did books, rituals, and institutional self-awareness.

Anna Moraht-Fromm has done a marvelous job compiling a series of focused essays that together enrich our understanding of the multimedia dimension of late medieval liturgical space and challenge traditional views of the hierarchies such space creates. The picture of late Gothic choirs that emerges is not one of hermetic closure and exclusivity, but rather one of porosity and flexibility, with laypeople playing crucial roles as viewers and patrons and with spatial and visual access carefully controlled but not entirely denied. The only place we do not see integration is in the essays' bibliographic references, which typically engage little with scholarship outside the geographical limits of each investigation. One hopes that the German-speaking contributors will come to make use of the holistic studies by Anglophone colleagues - along with those cited above, these include Paul Binski (The English Parish Church and Its Art in the Later Middle Ages: A Review of the Problem, Studies in Iconography 20, 1999); Paul Crossley (Polona Sacra and Bohemia Sacra: Architecture and Ceremonial in Krakow and Prague Cathedrals, Folia Historia Artium 10, 2002, 5-30), Michael Davis (Splendor and Peril: The Cathedral of Paris, 1290-1350, Art Bulletin 80, 1998, 34-66); and Jacqueline Jung (Beyond the Barrier: The Unifying Role of the Choir Screen in Gothic Churches, Art Bulletin 82, 2000, 622-57). Conversely, one hopes that this book will open the eyes of medievalists outside Germany to the complexity, importance, and beauty of late medieval architectural ensembles beyond France and England, and to the rich possibilities these offer for interdisciplinary study.