Anabel Thomas: Art and Piety in the Female Religious Communities of Renaissance Italy 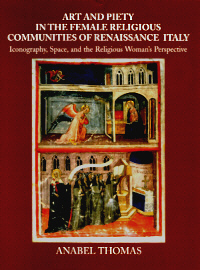 Anabel Thomas' latest book is promoted by its publisher as a "systematic survey" of Renaissance Tuscan and Umbrian convent images, with an eye toward assessing the place of art within women's religious communities. A study of the sort would be, in principle, a welcome addition for both scholars and students. Indeed, most published analyses of Italian Renaissance conventual art to date, including those by Gary M. Radke, Ann M. Roberts, and Jeryldene M. Wood among others, take the form of case studies of specific images, patrons, convents, or religious orders [1]. In line with these investigations, Anabel Thomas presents a great deal of specific, useful information and new ideas about her subject. However, the book as a whole will not be entirely satisfying to either the expert or novice reader on the subject.

The table of contents, which is divided by themes into five parts and twenty chapters, reveals an ambitious agenda. Part I, "The Social Function of the Institution," examines the categories of evidence for the character of female religious communities, including foundation documents, family chronicles, historical accounts, suppression documents, and material evidence. The author rightly cites the challenges of working with such sources, which are open to misinterpretation. She also begins to probe issues of gender, in part by reassigning two paintings traditionally attributed to the Augustinian male community of Santo Spirito in Florence to two women's communities of that order. Part II addresses the "spatial dimension," meaning first, the architecture of convent complexes and second, the physical locations of works of art within these spaces. Paintings and sculpture, she concludes, demarcated public and private spaces in churches and other conventual areas. The iconography of the works did not always depend on the function of the space, however, but also on community hierarchies.

Part III, "Art and Space," attempts to assign works to spaces identified by the author as "public" and "private", such as convent churches, nuns' choirs, and women's cells, using two Franciscan tertiary communities in Florence as case studies. The relocations and alterations of images as revealed through textual sources such as suppression documents are also considered here. Part IV, "Art and Ritual", examines political angles, the "nature of gaze", and "communication", or how altarpieces and other altar furnishings allowed nuns visual access to the mass while also maintaining physical boundaries between the public church and the nuns' choir. Specifically, the author cites Neri di Bicci's Coronation of the Virgin (1488-89), originally made for the convent of San Niccolò dei Ferri in Florence, which contains apertures through which, she argues, celebrants passed the wafer to the nuns on the other side. In Part V we learn about the groups who commissioned works for the church, including the nuns, their male superiors, and members of lay society. A complex network of relationships both inside and reaching outside the cloister impacted and facilitated the inclusion and content of art in convents.

Some of Anabel Thomas' conclusions are both creative and convincing, including her hypothesis about the purpose of the apertures in the Neri di Bicci Coronation. She is at her best, in fact, when discussing specific works and specific issues, which she does in great detail in places throughout the study. Her command of the source material in regard to the works at hand is clear. However, several larger problems impede the book's success as a whole. If the goal is a survey, then the detail is overwhelming. In many cases it distracts from the author's arguments. Indeed, her practice of reviewing the arguments of other scholars before attempting to disprove them weakens the author's own conclusions. On the other end of the spectrum, the specialist will find that the broad scope of the book, which crosses geographic boundaries and religious orders - Dominicans, Augustinians, and Franciscans are among those addressed (one wonders why these are chosen and others ignored) - makes for an unwieldy presentation, and some will wish for more thorough documentation. The thematic approach, furthermore, which is potentially highly productive, in this case mires the reader by necessitating constant referral back and forth in the text. Feminist scholars will note that the term "gaze" is incorrectly used to signify "audience" or "spectator" (the phrase "made for female gaze" appears throughout the book), implying that the author is unaware of the theoretical underpinnings of the term in regard to women's reception and female circumvention of patriarchal controls.

Finally, some of the study's major hypotheses are much less adventurous than implied. Some examples: art rarely existed in convents; when it did, it was no different from art made for clerics; "private" architectural spaces in convents were impenetrable by men; and nuns had no hand whatsoever in commissioning art. Given the scholarship of the past decade, rare should be the expert reader who still holds on to any of these assumptions. The real value of Anabel Thomas' book lies neither in its survey format nor its questions, then, but in the author's detailed discussions of selected works.