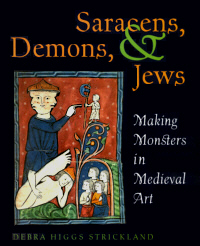 Saracens, Demons, and Jews: Making Monsters in Medieval Art, treats a subject as fundamental to Western medieval society as it is timely to the contemporary world: fear and loathing of an 'Other' defined through religious difference. In European medieval culture, Debra Higgs Strickland reveals in this masterful book, this 'Other' consisted of a range of pagan people, such as the Jews, Muslims, and Mongols, and of imaginary monstrous populations, including Giants, Satyrs, Dogheads, and other deformed or hybrid creatures. A rich catalogue of images, primarily in the form of manuscript illumination but also in stained glass, needlework, and sculpture, including tympana, capitals, and misericords, convincingly demonstrate how truly successful Western image-makers were in demonizing non-Christians, so much so that Strickland is able to chart what she terms a 'pictorial code of rejection' conventionalized through 'relentless repetition'. It is no wonder, in fact, that images became critical tools for marginalizing these threatening groups: as the author clearly demonstrates, the Western medieval spectator believed that external appearance reflected internal character. Strickland also shows how enemy groups were quite consistently demonized in the Classics and in medieval theology, drama, and literature, thus making the book useful to readers in several disciplines.

Strickland's ambitious chronological scope spans just over four centuries, from circa 1125 through circa 1530; her primary sources, both visual and textual, originate largely from France and England, where those identified as 'Others' were especially debased. The book is not arranged chronologically or geographically, however, but rather thematically. It begins by grounding the medieval 'pictorial code of rejection' in attitudes about the universe, the human body, and otherness that were transmitted to medieval world through Classical texts circulating in Europe beginning in the eleventh century. These writings reveal that ancient Greeks and Romans considered one's physical place in the universe critical to an understanding of an individual's moral composition. Strickland demonstrates how climate, the seasons, landscape features, and celestial effects described by Ptolemy and others were considered to impact moral character, and that these forces were also related to the makeup of the human body. Thus, the balance of the four humors - or lack thereof - was considered influenced by climatic and astrological forces. Such attitudes led to regional stereotyping: phlegmatic individuals, who dwelled in cold, damp northern regions, were hefty and sluggish. Furthermore, following Hippocrates, medieval Europe believed that it was possible to determine the moral traits of an individual (as opposed to a group) through physiognomical analysis: bodily appearance directly reflected internal character. Authors such as Pliny and Solinus described a wide range of Monstrous Races, barbarous imaginary peoples thought to dwell at the far corners of the world, whose physical deformities mirrored their interior deformities. Medieval theologians and moralists, including Augustine of Hippo (who argued that the Monstrous Races, as repugnant as they were, were formed through God's will) and Thomas of Cantimpré, responded to and expanded the mythology of the Races. That medieval artist expressed negative character traits through physical distortion - external ugliness signified moral and spiritual ugliness - is directly owning to such sources.

The following chapters detail the medieval demonizing of specific enemy groups through pictorial and textual representations. Chapter 2 shows, through a case study of the 'Ethiopians' (a catch-all term for black peoples residing in sub-Egyptian Africa) how traits used to vilify imaginary creatures, including the Monstrous Races but also demons (representative not of questionable behavior but rather of the more abstract idea of evil), were assigned to real races. Demons, themselves composite bestial figures, perverted in that they were part human and part animal, were associated with darkness. Indeed, medieval theologians made frequent reference to the change in the appearance of the rebellious Lucifer from dark-skinned to light in his fall to Hell, his facial features forever marred. Medieval artists drove this point home in depictions of Christ and Satan by portraying the body of the former in the color white and the latter in black. From this, it was relatively easy to associate the darkness of evil to the dark skin of seemingly pagan peoples, such as the Ethiopians.

Most medieval Christians did not interact with black Africans on a regular basis and thus the Ethiopians occupied a place somewhere between the real and the imaginary. Chapters 3 and 4, however, treat groups that were, albeit to varying degrees, directly integrated into European life. The most feared and detested of these groups was the Jews, who committed what was to the medieval Western mind the worst of all offenses: the murder of Christ. As Strickland notes in Chapter 3, medieval theologians and artists eagerly assigned numerous derogatory characteristics and features to Jews, making this the solitary population for which the 'full pictorial code of rejection' was employed. Wisely avoiding a comprehensive survey, she divides selected examples from the sizeable body of derogatory images of Jews into three discrete categories: 'physical descriptions', 'signs of damnation', and 'images of social conflict'. The Jews' physical features and attributes were already standardized by the twelfth century. Their picturing often drew parallels between Jews in the Bible - those who murdered Jesus - and contemporary Jews to implicate, by association, the latter group in that greatest of all sins. Some images cast Jews as compatriots with the Devil; others portray them as practitioners of heretical acts at the time of the Christian Apocalypse. Artists also ascribed them with barbarian and monstrous traits; depictions such as these, Strickland demonstrates, responded to and advanced biases that led to the expulsion of the Jews from England in 1290.

Chapter 4 treats imagery produced in relation to the crusades and other conversion activities waged by the Christians against three main groups: the Jews, the Muslims (pejoratively termed the 'Saracens'), and the Mongols and other peoples of Central Asia (pejoratively termed the 'Tartars'). Jews and Saracens emerged as idol-worshippers aligned with the Devil, to whom the Mongols in particular were linked through their dark skin. Muhammed, in fact, was identified as an actual demon. Alan of Lille (dated 1203) further described the prophet as leading a 'monstrous life' and founding 'an abdominal sect'; equally damning were images that forwarded Muhammed as a practitioner of self-indulgent and morally repulsive acts, including polygamy. The Tartars, however, were even more threatening to the Christian West because of their military might and expansionist agenda. Indeed, in the thirteenth century the Mongols successfully claimed much of Asia and Eastern Europe; the rest of Europe considered it only a matter of time before the same thing happened there. Such fears were manifested in Western sources that cast Tartars as deformed (in the tradition of the Monstrous Races), brutal, idol-worshipping cannibalistic polygamists. But the defamation does not end there. We learn in Chapter 5 that the Tartars and Saracens alike were written into the theological exegesis as participants in an Apocalyptic conspiracy to bring down Christendom. Their ostensible defeat advanced the Church as the ultimate authority.

Along the way and especially in the concluding chapter, Strickland highlights some occasions in which groups or individuals normally depicted derogatorily were pictured positively. For instance, images that affirmed the Jewish people or at least depicted Jews neutrally were sometimes made: the Jews were, after all, in the minds of many Christians, God's chosen people. Certainly, though, these cases were exceptions to the rule. As Strickland expertly demonstrates in this beautifully written and illustrated book (the color plates scattered through the Preface seem accidentally misplaced, however, in regard to the Plates section immediately following), biases may have driven the discourse but they did not fully overshadow tolerance.