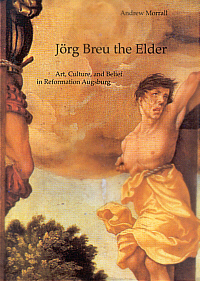 The subject of Andrew Morrall's book is the life and work of Jörg Breu the Elder. In the guise of a biography it is a convincing contextualisation of a German artist who happened to live in the troubled times of the outset of the Reformation. One is consequently confronted with a study of the artist within the context of broad historical issues, the early reception of Italian art in Germany and the effects of the Reformation upon the nature and practice of art. The study wishes to explore the social and religious world of a German artist, being at the same time an interesting investigation of the urban context.

With its monographic focus on Breu, the book is a welcome addition to the existing historiographical landscape, which has increasingly focused on religious art during the Reformation. First of all, Breu is interesting as an artist because he worked in a variety of media: panel painting, fresco, woodcut and the decorated glass roundel. Breu's work also displayed stylistic diversity, consisting of an original experiment of the emergent Danube School, the established local manner of Augsburg, based on the fifteenth century Flemish tradition (albeit modified by the influence of Dürer and reflecting the tastes of an urban clientele) and finally Italian influences and the adoption of classical models.

Moreover, Breu has a unique position from a historical perspective. His career spans the dramatic years of the Reformation in Augsburg, when the city was riven with social and religious tensions, rioting and iconoclastic outbursts. Finally, he advocated commitment to the Protestant cause and expressed his views on religious art in written form in a chronicle of the city. Attempting to discuss Breu's activity as a painter in relation to his reformed beliefs and views on religious art, Morrall advocates that on a number of different levels Breu's work registered the impact of the Reformation. The author suggests that the long-term effects of this movement on the arts in Augsburg were profound, as religious painting as a viable economic enterprise ended and the creative energy of artists had to be channelled into other fields.

The work is also justified by a survey of existing scholarship on Breu, where the present author highlights the misconceptions and projections which have prevented a better understanding of the artist. This has partly resulted from a marginalisation of artists considered of second rank. Thus, Breu has not benefited from the attention of scholarship since a 1928 monographic study of his artistic personality. Morrall also highlights a series of biases, which have impacted on the assessment of Breu's art: the nationalism implicit in early interpretations of German Renaissance art, which laid stress on the supposedly indigenous Germanic qualities of style and feeling and saw the intrusion of 'foreign' Italianate characteristics as a dilution of a true 'national' style. After the second world war and the extremes of nationalism, Hegelian collectivism as a model for historical explanation was completely discredited. While Marxist and social historians in the 1970s have revitalized the study of the Reformation, the broader historical position of the artist continued to be neglected by this type of scholarship.

The study, building on previous research, seeks to widen the historical framework in which Breu's art may be understood and is primarily concerned with a historical explanation of style, its context, semantic meaning and reception, rather than stylistic development per se. The work aims to surpass two assumptions underlying the earlier interest in stylistic development, focused mainly on the artist's individual artistic development, from an incipient to a mature phase, and his integration within a greater stream of national or period style. In contrast to this approach, Morrall is concerned with the relationship between style and meaning, exploring the function of art within broader areas of social and cultural experience. The intention of the study is to restore to the artist a measure of historical significance. Moreover, the work aims to explore Breu's historical importance, which lies in his situation as a craftsman and artist at a particular and critical historical moment. The artist's creative energies were refocused from religious painting to secular forms of art. Ultimately, this study involves the placing of the work of art within its broader social and cultural context.

The book is probably at its best in its innovative use of sources and the originality of the methods the author deploys. Some of the freshness of the approach is provided by the exploration of the semantics of Breu's artistic vocabulary, as the book is primarily concerned with the artist's work to 1527 and examines his development within the context of workshop practice. The study also charts Breu's early responses to Italian art. It deals with the evolution of Breu's late style and attempts to explain its overt neoclassicism as one consequence of a new conception of the function of the artwork in the wake of the Reformation. The book explores Breu's relationship with printers and publishers and the impact of the Reformation on printing. It is suggested that the humanist taste for editions and translations of classical and Italian texts gave way to the demand for religious polemic in the form of small, cheaply produced pamphlets. Morrall also suggests that artistic style was understood by contemporaries in social terms, coloured by political and ideological associations.

But the most significant contribution consists of the parallel investigation of both Breu's art and his written testimony. On the one hand, the author uses Breu's chronicle in order to highlight his private beliefs and his own brand of piety, on the other hand he analyses Breu's work in the context of the changes the city had undergone beginning with the 1520s. Breu's own views on social and religious issues, adduced from his entries in the chronicle, are set within the context of emergent popular Protestant beliefs in Augsburg. At a certain level, the study is one of social history, as it wishes to see Breu as a representative of the condition of the artist during the Reformation in Germany. Because the literary source exists and states so emphatically Breu's allegiance to the new Protestant ideology, it is rather tempting to look for an expression of reformed ideas in his art. The survey of Breu's activity, however, provides conflicting information. His willingness to carry out Catholic commissions suggests indifference to questions of religion and idolatry, his attempts to redirect his work towards the printing industry display pragmatism, as his woodcuts could be used by both Catholics and Protestants, while Morrall's contention that the iconography of Breu's paintings suggests a specific Protestant content is not sufficiently supported by the analysis of the various examples. Although tempted to read Breu's paintings in the light of the evangelical beliefs espoused in his chronicle, Morrall cautions that works of art at this time were seldom the product of private involvement and that the painter was guided by both public and external expectations. Morrall succeeds in arguing convincingly that Breu's work registered the impact of the Reformation although he is less persuasive in analysing Breu's paintings as Lutheran works of art.

Considered together, Breu's work and written testimony allow rare insight into the tone and texture of a conservative craft world, into workshop and guild practices at a time when the aesthetic, cultural, social and economic bases of art were undergoing rapid change. Morrall contends that Breu's reactions to the massive social and cultural forces that engulfed him are not only uniquely interesting in themselves, but were in many ways representative of the condition of many artists during the Reformation years.

Morrall does an excellent job of placing Breu in his social context and his workshop in a world impacted upon by the onset of the Reformation. The author highlights the protracted struggle between the moderate merchant elite who found Lutheran ideas congenial and the more disadvantaged groups who pressed for more radical reforms. Equally convincing is the reconstruction of Breu's own option in favour of Zwinglian ideas, which attracted him through the social programme involved, rather than through the doctrinal one. He was clearly drawn to Biblical fundamentalism, to elements of social criticism and civic idealism absorbed from religious pamphlets. It is, however, impossible to assess how representative Breu was of his own class, the independent literate guildsman of middling income, the solid stratum of small craftsmen operating within small family workshops.

Because it addresses both historians interested in the late medieval and early modern world and art historians focused on the late Gothic and the northern Renaissance this book will be an important addition to university libraries and will find a place on the shelves of many scholars.