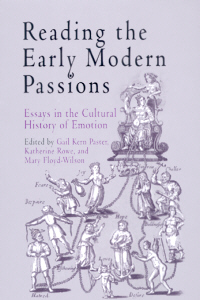 This volume is concerned with the exploration of 'passions', with the specific character and distinctive profile of emotions in the early modern period. The essays address specific emotions - sadness, courage, compassion - as expressed by individuals, while they also aim at exploring the emotions spread throughout a particular society, such as fear of tyrannical rule or popular disturbance. The volume is also concerned with early modern anxieties about the overwhelming power of emotions, especially in the case of women. Finally, the studies investigate the role of emotions in mediating the relation between the individual and God, political authority and society. Consequently, the essays in this volume place emotions in the context of the particular political events of the French and English civil wars.

The volume aims to outline an intellectual history of the emotions, taking into account the milieu for the construction and perception of emotions, the theological discourses prevalent at the time, and a degree of cultural determinism. Moreover, the volume wishes to bring a new perspective to the study of emotion provided by the particular lens of early modern creative expression. In a sense, the volume aims to study emotions both synchronically and diachronically, to compare the social and linguistic rules for emotion in different cultures, providing a trans-historical reading of emotions.

The essays in this collection are primarily concerned with differences between early modern and modern representations of emotion. While accepting that the biological basis for human emotions argues in favour of universality, the authors in this volume are more concerned with the diversity of emotional expression and experience. In order to grasp these differences they focus on the language of emotion, since early modern writers themselves have provided various discourses and even competing taxonomies of emotions.

As cultural historians, the contributors to this volume seem aware that the representation of emotions resides at the heart of artistic production. Consequently, the studies mostly rely on textual and some visual evidence in order to grasp an early modern emotional universe. These comprise English lyric poems, Italian tragicomedies and various examples of visual and musical documents. Thus, the essays in the collection demonstrate awareness of and familiarity with an immense body of literature in a variety of fields.

This is not a strictly historical approach as suggestions from philosophy, psychology, anthropology and social science are integrated. The chapters in this volume argue in favour of more conceptual and methodological accommodation between empirical sciences and cultural studies. The volume attests to the continuing power of various interpretative models, for instance psychoanalysis, as it understands emotions as coded expressions and as symbolic processes and supports historically comparative readings of psychological states like melancholia. The volume shows how early modern texts may prove fruitful for post-structuralist scholars who wish to reflect on Freudian essentialism.

The collection is structured in three sections, concerned with scripts, historical phenomenology, and disciplinary boundaries. In the first section, Richard Strier, Michael Schoenfeldt, Zirka Filipczak, and John Staines argue that the current tendency to separate reason from passion or to consider individual experiences as more authentic than culturally sanctioned ones may dim the scholar's ability to perceive less familiar Renaissance valuations of emotions. A number of the essays integrate a phenomenological approach with an exploration how pre-Cartesian psychophysiology may have affected early modern self-experience. The first group of essays seeks to demarcate how modern narratives concerning the development and status of emotions fail to match entirely the twists and turns of early modern scripts. The essays in the second section stress the fact that the period's most categorically 'scientific' discourses on the passions are themselves not only socially invested representations but also cultural scripts. Gail Kern Paster, Katherine Rowe, Mary Floyd-Wilson, Bruce Smith, and Gary Tomlison all imply that the very language of physiology helps determine phenomenology. The second group of essays invites us to imagine the early modern embodiment of emotion in terms that challenge post-Cartesian divisions between thought and world. The third group of essays offers a critical context for understanding the methodological differences between the scholarly fields that currently claim emotion as their area of expertise. The studies of Victoria Kahn, Timothy Hampton, Douglas Trevor, and Jane Tylus convincingly suggest that the history of emotion is also a history of consolidating aesthetic and disciplinary boundaries.

This collection argues convincingly that emotions are a valid category of study, while highlighting how early modern notions concerning 'passions' differ from current categories. The volume makes clear that taxonomies of emotions do not easily translate across cultures or historical periods. Emotions offer a glimpse into the history of rhetoric, the discourses deployed in the construction of emotion from the medical to the religious and the aesthetic. The essays also show convincingly that language, in its infinite variety, does not reveal what emotions really are but rather what people have thought about them in different contexts. Consequently, accounts concerning emotions can move between the ideal and the prescriptive. This results in a profound recognition of language's constitutive role in any culture's emotional universe.

The study of emotion is also able to throw some light on the social role of the arts, while contributing to adjacent fields, such as the history of science and religion. The essays are sensitive to the cognitive scenarios, the narrative scripts that govern affective expression and exchange, and the different values informing each of these cultures. The chapters reveal how varied and conflicted classical and Christian conceptions of emotions were by identifying the anti-Stoic strain of early modern humanism and reformist theology.

The volume succeeds in bringing much-needed clarity in the terminology, by developing a working vocabulary relevant to the study of emotions and recognisable across the disciplines involved in this type of research. The book manages to bridge disciplinary divisions and different attitudes to the expression of emotion between evolutionary psychologists, cognitive scientists, behavioural psychologists and cultural anthropologists. This is very important as a battle has been waged concerning the very definition of emotions between behavioural and evolutionary psychologists on the one hand and cultural anthropologists on the other, as one discipline is committed to a universalist premise concerning quantifiable emotional output, while the other focuses on emotional variation and the culturally specific context. Although put together from the perspective of cultural history, the authors of this collection are sensitive to the taxonomic issues that philosophers, psychologists of every ilk, and social theorists are so concerned about. However, they are more anxious about the motivations and methodologies behind the universalist explanations of these rival disciplines.

The collection also highlights the early modern investment in emotional expression as a generic marker of social status or as a matter of communal bonds. This is again very different from the current privileging of emotions as inward rather than social phenomena and introduces welcome caveats concerning the ways one approaches the past.

This thought-provoking collection, brimming with interesting ideas, brings much-needed insights into the emotional world of early modern people. The volume turns the literary production of an age into a new source to tap in order to further our understanding of the mental world of its inhabitants. There is a welcome focus on terminology, on the language used at the time, in an attempt to understand the emotions of early modern people on their own terms. Many of the contributions refer to a diachronic linguistic process while they also question whether the binary of literal versus metaphorical impedes our understanding of the way language and emotion functioned in the early modern period. Finally, the chapters in this book contribute to a broader understanding of boundary shifts between the disciplines, the emotion scripts that inform them, and the methodological challenges such shifts generate for scholars interested in the study of emotions. Historically conditioned perception appears as a critical component of the study of emotion.