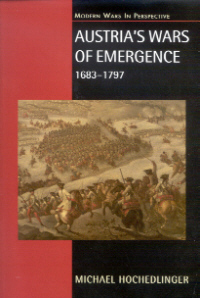 While it is undoubtedly the case, as the author of the volume under consideration points out in his preliminary remarks, that the Habsburg Monarchy remains the most understudied of the Great European Powers of the eighteenth century, much new work, particularly outside of Austria, is rapidly beginning to decrease this deficit. However, with some exceptions contemporary historians have seemed to shy away from traditional political, diplomatic and military narratives in preference to social, cultural and intellectual themes. Much of the former material was assembled by nineteenth and early twentieth-century historians in often widely dispersed and difficult to find works, and general surveys of the Monarchy mostly lack sufficient detail on its military establishment. The Habsburg army and its wars from the period of the Turkish siege of Vienna in 1683 to the War of the First Coalition with the French Revolution is therefore certainly a subject worthy of the Longman "Modern Wars in Perspective" series.

Though Michael Hochedlinger - a Senior Archivist in the Austrian State Archives - has not attempted to write a book based on extensive archival sources, he has therefore nevertheless provided a very important service by bringing together in one handy volume much neglected material that will be invaluable for anyone working in the field. The volume is divided into 21 chapters, but each chapter is itself divided into numerous autonomous sub-sections so that on the whole the work resembles more an encyclopedic reference volume than a monograph. Indeed, it is largely written in the style of a continental "Handbook," with relatively extensive and thorough bibliographical notes at the end of each chapter. Divided into five sections, of which four break up the period under review chronologically (1683-1733, 1733-1748, 1748-1789 and 1789-1797), it tends to concentrate on domestic institutions and structures, careful analysis of the military establishment at each stage, and a rather more general discussion of the diplomatic and military developments. Unlike other volumes in the Longman series of which it is a part, however, it does not analyze any battles or deal with strategy and tactics employed in the wars under review. Further, while the bibliographical notes tend to be encyclopedic, there are no footnotes or source references in the text itself, making it difficult to follow up on specific points and diminishing its value as a "Handbook."

Given the nature of the volume it is therefore less given over to the argument of a major central thesis and more to the presentation of essential data. This is not to suggest that Hochedlinger does not make subsidiary arguments along the way, nor that the volume lacks in overarching contentions. For example, one of the primary underlying themes, explicitly articulated near the outset, is that decision-making in the Habsburg Monarchy "was dominated by the power-political concerns of its sovereigns to which practically every other sector of state activity was subordinated" (43). It is of course understandable that Hochedlinger would seek to right what he perceives to be a historiographical imbalance that seems to have given short shrift to international and military history, but such broad assertions may be overstating the case. Certainly the argument has been successfully made by Robert Evans and others that such arguments put "the cart before the horse", and that the military and diplomatic "war chariot" was "sustained by the logic of domestic political relations within the Monarchy, and drawn by a combative ideology already formulated". [1]

Further, by emphasizing the institutional and structural elements of the Habsburg military it is perhaps inevitable that Hochedlinger would come to the conclusion that the "true nature" of the Monarchy was "distinctly martial", but whether one can go so far as to suggest that by the end of the eighteenth century it had turned itself into a "highly militarized state perfectly comparable to [...] Prussia" (2) is certainly open to question. As the most magisterial survey of the Baroque Monarchy has pointed out, the Habsburgs were a "largely unmilitarist dynasty" [2], and even Joseph II, who constantly lamented that his army was not big enough to defend against the dangers facing his state, and who did so much to enlarge his army after the Seven Years War, did so out of defensive anxiety rather than the barracuda-like opportunism of his Prussian rival. Despite the introduction of Prussian-style conscription, the dramatic increase in the size of the military establishment and the improved organization and undoubted professionalization of the army's infrastructure, it is misleading to paint the Habsburg Monarchy of the later eighteenth century as a "militarized state". Frederick II may have attempted to flatter Joseph II by suggesting in 1770 that as a result of the emperor's efforts Habsburg soldiers were now "Prussians in white uniform" [3], but the Monarchy itself was a long way from being Prussia. The analytical problem of what constitutes a "militarized state" is a complex one, but most discussions of militarism and militarized societies imply a penetration of the military ethos into society and the value system of its governing elites that was largely absent in the Habsburg Monarchy. Hochedlinger certainly makes no effort to tackle the issue of militarism in the style of Otto Büsch [4] or his more recent critics.

Beyond that, it is perhaps churlish to lament the chronological limits of a volume already 446 pages long but the logic of the history of the Habsburg military establishment would suggest that an extension on both sides of the narrative would have made sense. As Hochedlinger himself points out, the history of the standing army in the Habsburg Monarchy begins in 1649, with an imperial decree establishing it in March of that year. Emperor Ferdinand III's priority focus on his own hereditary lands after the Thirty Years' War certainly represents an important turning point in the history of the Monarchy, of which the establishment of the standing army was a symptom. But what perhaps compels an analysis of the subject in the three decades prior to the 1683 siege of Vienna even more are two pivotal factors: the important structural and organizational reforms undertaken by the most prominent Habsburg general of the age, Raimondo Montecuccoli [5], and the reemergence (after almost two generations of calmness) of the Turkish threat after 1656.

Equally debatable is the decision to terminate the volume with the Peace of Campo Formio at the end of the War of the First Coalition against Revolutionary France in 1797. Here, too, an extension to at least 1801 would have made sense. Not only was the Peace of Campo Formio little more than an armistice, where the attitudes of the belligerents virtually guaranteed the subsequent War of the Second Coalition, from a structural and organizational point of view little changed within the Habsburg military establishment until the first wave of reforms undertaken by the Archduke Charles and his protégé, Ministerial Councillor, Mathias von Fasbender, between 1801 and 1805. [6]

None of this, however, diminishes the value of the work, especially for those seeking basic background material on the Habsburg Monarchy in this period. Supplemented with many helpful charts and maps, and with a 4-page Glossary that undergraduates will find particularly invaluable, the wealth of material presented alone make this a reference work of the first order. One final quibble, though: that Longman would choose to change the format of the series is in itself not a problem, but the new font adopted, with its lighter type and often barely-visible serifs make it substantially harder on the eyes and more difficult to read than the earlier volumes in the series.