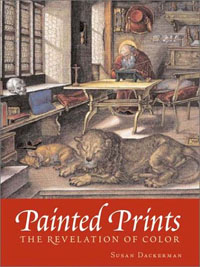 There are few museum collections of prints which are sufficiently comprehensive to allow curators to organise a thematic or monographic show without bringing in loans, but exhibtions of this kind can provide a valuable starting point for investigating particular prints or groups of prints within a collection. This was precisely the case when Susan Dackerman started to organise Painted Prints, seen last year at the Baltimore Museum of Art and this year at the Saint Louis Museum of Art (until 18 May 2003). She included only three sheets from Baltimore's collection and with a total of sitxty-one catalogue entries "Painted Prints: The Relevation of Color in Nrothern Renaissance and Baroque Engravings, Etchings and Woodcuts" was not a large exhibition. The title indicates the scope of this innovative show. It is the first time that a scholar has brought together examples of hand-coloured prints. One normally associates prints with black-and-white images - there are a few exceptions such as chiaroscuro woodcuts or later in the 18th century the colour printing techniques - but hand-coloured prints have not generally been considered worthy of serious attention. This exhibtion covers many aspects of this category, from late medieval single-sheet woodcuts to mannerist prints.

The exhibition was not arranged chronologically. This seems to be sensible because a chronological order would raise more questions than it could answer, the main problem being whether the date of the publication or the date of the colouring of the print should determine the order. Instead the show concentrated on the various techniques involved and on the function and perception of this specific category of printmaking. After an introductory room giving the visitor some background information, the show in Baltimore started with early examples of colouring and printing in colour or on coloured paper. Taking into account that printing in colour inks or on coloured paper is different from the handcolouring of prints, it can explain nevertheless a more general contemporary understanding and perception of colour in printmaking. Therefore comparisons, even if they are more or less known through the literature, such as the two versions of Hans Burgkmair's, "Emperor Maxiliman on horseback" from 1508 (Cat. no. 12) with Lucas Cranach's, "St. George and the dragon" from 1507 (Cat no. 11), can offer new results just through their wider context. Unfortunately these aspects are less visible in the catalogue than it was evident in the show. Further sections focused on specific aspects such as the use of stencils, a monographical section on Dürer, and groups of works devoted to countries, such as Germany and the Netherlands, as well as sections on "Commemorative coloured print projects" and the function of coloured prints. The limited number of exhibits is rather advantageous, although many more examples could have been included. Nevertheless, the main point of the show is made perfectly clear.

The catalogue consists of three essays, two by Susan Dackerman herself and one by Thomas Primeau. Dackerman writes about the rediscovery of painted prints and on their tradition and production of painted prints in Germany and the Netherlands. Primeau, one of the paper conservators in Baltimore, examines the sheets from a technical point of view. Dackerman's first essay is intended to be a general introduction to coloured prints and gives an overview of the history of research in this field. The historiographical part of the overview is fairly brief since little has been published so far. Apart from David Landau and Peter Parshall's pioneering book on the Renaissance print (1994) in which polychrome prints are extensively discussed, little else has appeared. Jan van der Stock's book on printmaking in Antwerp (1998) touches on the subject and there have been a few articles by Hans Georg Gmelin (1983), Truusje Goedings (1989 and 1995) and Barbara Welzel's essay on monochrome and painted prints (1996). It is astonishing that this important part of the history of printmaking has been so neglected.

Although renaissance and baroque art make great use of polychromy, prints have always seemed the exception. Dackerman points out that this view has less to do with contemporary attitudes in general and more with historiography. It is true that Erasmus was reluctant to accept the idea of the coloured print. When comparing Apelles and Dürer in his De recta Latini Graecique sermonis pronuntiatione of 1528, he emphasised that Apelles needed colour for his art whereas Dürer could concentrate on pure line. This medium was sufficient for him not only to represent solid objects but also immaterial phenomena such as light and shade, rays, sensations or emotions. Painting onto a print by Dürer would be not only unnecessary nor desirable but also superfluous to the aesthetic of his graphic work and conceal the mastery of his art. Although these arguments were clearly intended to establish the genius of Dürer over his contemporaries and successors, it is remarkable that Erasmus's ideas remained subliminal during the following centuries, affecting the reluctance of modern historians to take coloured prints seriously. But it is not as if the prints themselves are completely unknown. In some instances, such as the single-leaf woodcuts and some metalcuts of the fifteenth century, the use of colour is perfectly familiar. One of the difficulties in studying coloured prints is their hybrid nature, while the involvement of different hands also created problems of attributions. It is obvious that such prints need a specific approach, much more difficult to solve than other cases of several hands involved in printmaking, such as the division of inventor and print-maker, or when later two engravers worked at one plate or overworked it.

The other question raised by Dackerman deals with one advanced by Welzel. To what extend can prints been seen as uniform objects? From the eighteenth century onwards, handbooks on collecting and the connoisseurship of prints stressed the outstanding quality of the impression, emphasising the importance of the early stages of production and the state of preservation of the unchanged sheet. Against this background, painted prints were treated as marginal objects, inferior to the well-preserved, untouched early impressions so highly prized by collectors. It might be added that this question has practical implications for the storage and classification within collections, which have traditionally been based not on the skills of the illuminator but on those of the print-maker. And this raises a further question about the relative claims of the inventor of the image as opposed to the engraver and woodcutter. Modern ideas of artistic originality are a hindrance in this area as has been shown recently in other aspects of renaissance printmaking. It is not easy to find answers to these complex questions and Dackerman does not claim to have found a solution.

In her second essay, Dackerman takes Erasmus's statement and his Aristotelian preference for line over colour as her starting-point but she goes on to show the variety of approaches found among his contemporaries to the business of colouring prints. Two printed images serve to illustrate how this trade became highly acceptable: an illustration from Jost Amman's "Book of trade" ("Eygentliche Beschreibung Aller Stände auf Er=den Hoher Vnd Nidriger Geistlicher Vnd Weltlicher Aller Künsten Handwercken und Händeln ...") published in 1568 and another from Valentin Bolz's book on colours of 1549. Both involve respected artists and both present Briefmaler as colourists of prints and maps. This little excursus into the printed perception of illuminists is the basis for a case study of the Mack family of Nuremberg who produced some of the best-known colourists of prints, often signing and dating their work. Using the city-records (Ratserlasse), Dackerman has found extensive evidence for how the trade was structured and regulated and how the artists were organised in this city.

The second part of her essay is devoted to the use of painted prints. She discusses many possible functions but there is little evidence, many of her ideas are speculative can only form the basis for further research. In the case of some sheets, especially the large ones, one can assume that they were used as wall decorations. Religious sheets also had their self-evident uses. Nevertheless, there is a need for more investigation on this particular topic, particularly on the intentions of the clients who commissioned them and their meaning to the contemporary public. It is beyond the scope of this review to discuss all the revealing results of Dackerman's work but her essay will surely have a huge impact on the direction of future research.

The third essay, written by the paper conservator Thomas Primeau is equally important. His main concern is not the socio-historical background nor the economic or artistic implications but the manual aspect of hand or stencil colouring and the different pigments used. Primeau uses various methods to examine the colouring substances and makes far-reaching conclusions. The examination of colours and their related pigments might become the basis for dating the colouring of sheets, provided the difficulties involved in the scientific analysis of the material can be overcome. In particular, Primeau's description of and his remarks on painting and printing at the end of this essay should not be overlooked and should encourage others to attempt to apply similar methods of examination. Many of his remarks are amplified in the various catalogue entries where there are cross-references to the useful list of pigments used in colouring the sheets that is provided at the end of the catalogue. The value and range of the catalogue lie in its indication for further research and as food for thought for print room curators in their treatment of coloured prints as well as in the re-examination of perception of polychromy especially in Nothern renaissance and baroque art.