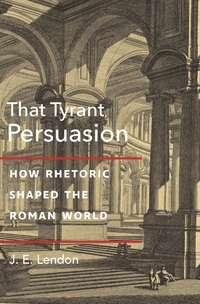 J.E.Lendon has written a delightful and stimulating book. His fundamental thesis is that rhetoric as a system of education in classical antiquity had profound effects on its students, shaping their actions as well as their speech. He explores this thesis through three case studies: the assassination of Caesar; city-planning in the imperial period; and developments in Roman law in the later Empire and into late antiquity.

In the case of Caesar, Lendon suggests that the effects of declamatory exercises about tyrant killing may explain the oddities of the assassins' behaviour: that Caesar alone was the target, that the conspirators themselves, en masse, did the deed (rather than employ D. Brutus' gladiators), that Brutus and Cassius then retreated to the Capitol and were so heavily invested in explaining their actions through speech. These were features of model declamations, in which personal responsibility for the killing was key and where the tyrant's death, on its own, was the end of the story, with the immediate resumption of normal political life. In section III Lendon looks at nymphaea, suggesting that they became so popular, where they were popular, because of the emergence in the later first century C.E. of rhetorical instruction on how to praise cities which used as its pattern the praise of men, and in which a city's situation, and so its water supply, became one of the standard aspects to be praised. Where elites grew up thinking about cities in relation to water, big fountains - at least in dry areas - were commendable in practice as well as theory. Though, as Lendon discusses, the relationship between epideictic oratory and city planning was not always straightforward: city walls were problematic in oratory, and there is no obvious rhetorical or architectural story to tell there. In section IV Lendon turns to the difficult issue of rhetoric and Roman law. His argument is that the 'laws' invoked in declamation - so wildly different from actual Roman law - can in a few cases be seen to affect practice in the courts and eventually legal codes. So, for example, declamation operated on the principle of 'an eye for an eye', including for false accusations; by 423 C.E., unsuccessful prosecutors were actually facing the penalty that would have been applied to the accused, if found guilty (128-129).

How far any of the specific arguments presented in this book will command assent is debatable (and it is not even clear that Lendon himself believes very much of it: 'it should be made quite clear at the outset that the argument of this book is speculative', p. xiv). In the case of Caesar, for example, the case study where this reviewer feels most comfortable, holes can be spotted. There is the rather banal chronological point that we don't know exactly how far the declamatory situations attested later had been fully developed in educational practice by the early 60s, when Brutus was a student. And the decisions which, with hindsight, look idiotic were perhaps explicable by factors other than rhetorical training: to have taken a bunch of gladiators into a senate meeting would undoubtedly have told Caesar what was about to happen - with unpredictable results; it is not entirely inexplicable to imagine that Brutus did not want to kill Antonius; and, above all, he and everyone else did have a real example of the removal of the tyrant leading to the return of normality, with the departure back to private life of Sulla, only a generation earlier. Believing that the problems of the res publica were tied up with a single individual was naive, undoubtedly, and catastrophic, but it doesn't actually require rhetoric for its explanation.

However, this kind of criticism rather misses the point of this monograph. Its strength is its wide-ranging, inquisitive, critical spirit; with questions as good as the ones here, answers are a secondary consideration. It is indeed peculiar that Libanius' praises of Antioch are so aquatic; and that nymphaea were so popular. And why on earth did Roman declamation - whose elite students were going to live lives in which the law would have undoubtedly played a significant part - use a set of laws which bore so little relationship to Roman law? And there are many excellent things in passing, too, such as the discussion of declamatory flavouring in some later accounts of Caesar's assassination (51-53). And overall, Lendon's thesis is a soundly based challenge to current researchers: why are we so comfortable with the idea that rhetoric affected what elite Romans wrote, and so oblivious to the idea that it might have affected what they did?

The book is a crisp and propulsive read; even those who dislike end-notes will admit that Lendon uses the format excellently. I can't wait to put it into the hands of my students, not least in the hope that it will encourage them to think of the field as one still capable of sustaining bold and innovative inquiry.