Ali Yaycioglu : Partners of the Empire. The Crisis of the Ottoman Order in the Age of Revolutions, Stanford, CA: Stanford University Press 2016

Will Smiley: From Slaves to Prisoners of War 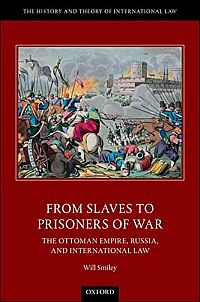 In this well-researched and notable first monograph, published by Oxford University Press, Will Smiley challenges the traditional understanding of international law and presents a revisionist historical background for international and military law in the context of Ottoman enslavement practices and Russian-Ottoman wars through the long 18th century (1700-1878). Will Smiley is an assistant professor of humanities programme at the University of New Hampshire. His main academic interests include the history of the Russian and Ottoman empires, martial law, international law, slavery, war captivity and military history.

Smiley's well-researched book will be valuable for anyone working on Ottoman history, international law or Eurasian studies and blazes a new trail for future debates and research in these fields. Moreover, readers can obtain thorough knowledge, about the history, legal history and political and institutional histories of the Russian and Ottoman states. Smiley's ability to read between the lines and interpret historical events from different perspectives makes the book more perspicuous and interesting to read.

Smiley's knowledge of Modern Turkish and Ottoman Turkish facilitated his work in the Ottoman Archive (The Directorate of State Archives of the Presidency of the Republic of Turkey) and the Topkapι Palace Museum Archive in Istanbul. Smiley has also used archival documents held at AVPRI and RGVIA in Moscow, Russia. His use of archival documents in Turkey and Russia enabled him to develop a valuable database, statistics, numbers and figures on slaves and captives of war.

This book consists of five parts and 10 chapters, covering Russian-Ottoman warfare in the 18th and 19th centuries and its impact on modern international and military law in Eurasia. Beyond that, the book also sheds light on practices of enslavement, ransoming, warfare diplomacy and military captivity in the Ottoman and Russian empires. In all, the Russian and Ottoman empires fought in 11 wars from 1667 to 1918. The balance of power and the course of diplomatic negotiations gradually turned in favour of Russia. Smiley rightly and effectively argues that through the treaties, customs, practices, agreements, policies and sets of rules worked out by the two states during peace negotiations, formed not only modern regional law but also international customary law and military law, which encapsulates the law of prisoners of war. These sets of rules established the basis for the abandonment of ransom practices and transformed the category of slaves into prisoners of war, which eventually led to the formulation of foundational elements of modern international law. Smiley defends and backs up his arguments quite convincingly, by employing impressive data in the light of archival documents.

The book begins with the historical background, describing the formation of both the Ottoman and the Russian states and their uneasy relations due to the slave raids of the Crimean Tatars. Muscovy was a primary target for these slave raids until the early 18th century. However, as Muscovy became more powerful and became able to bring the raids under control, the overall course of the history of slavery changed both in the region and in Eurasia. It should be noted that Smiley's successful and neutral macro-historic methodology, which covers the Ottoman and Muscovy states, is a remarkable and precious approach that enables the reader to look at the events from a broader perspective.

The author reports that until the Treaties of Karlowitz (1699), it was common practice to ransom captives or reduce them to slavery and sell them in the slave markets of the Ottoman Empire. Smiley gives a detailed analysis of the gradual end of the practice of enslavement of war captives in the Ottoman Empire, beginning with the Karlowitz and Istanbul Treaties in 1699 and 1700, turning the status of captured combatants to prisoners of war. He emphasises that the end of this practice required a long time and great legal and political transformations, for which the Treaties of Karlowitz and Istanbul were just the starting point.

Smiley emphasises that before these treaties, the Ottoman Empire had held a gazi state ideology that saw itself as Abode of Islam (Dar al-Islâm) and was expanding its territories to continuously make new conquests in Abode of War (Dar al-Harb). Beginning in the 18th century, the Ottoman Empire became a peaceful state that guarded its own security, border and peace by means of diplomatic negotiations. That is to say, following this transformation and the acceptance of new sets of rules, ransom and enslavement practices of captivity transformed into the law of prisoners of war. Moreover, the principle of prisoner exchange without demanding for ransom between warring states became accepted.

This meant that states no longer enslaved or ransomed prisoners of war, and they were in the position of encouraging and regulating the process of exchange. On the one hand, Ottoman defeats played a central role in this transformation and acceptance of a new reality in terms of beginning diplomatic negotiations, while on the other hand, this new kind of diplomatic negotiations opened a new chapter in the lives of war captives and international legal regulations.

The question of the nature of Ottoman slavery and how it could be escaped ends the first part of the book. Smiley shows that before 1700, the customary law of the empire offered several ways of freeing captives; however, after the Treaties of Karlowitz and the subsequent agreements (1706, 1718, 1739), ransom-free release of war captives and those illegally enslaved became the general rule.

The second part explores the shift from a Law of Ransom to a Law of Release, which occurred in the 18th century, as Russia was proving itself militarily superior to the Ottomans. This shift incorporated changes to how captives were found, released and sent home, as well as the compensation that slaveholders were paid by the Ottoman state. To Smiley, this moment, when Ottoman and Russian officials collaborated against slaveowners, marked a crucial moment in the history of the Porte.

The reader may be surprised by Smiley's interpretations of these historical changes. According to him, Russia's political and financial attempts to admit the Law of Release, force the Ottomans to abandon ransoming captives and reducing them to slavery, manumitting hundreds of thousands of Russian slaves from Ottoman households and sending them back home all occurred for economic reasons. More explicitly, as the Russian state was expanding rapidly and greatly, the state required people to populate the vast lands of Russia as labour in its flourishing agriculture and to collect tax. This interpretation and accompanying narration brings a new perspective to our understanding of the events and leads the reader to re-evaluate the general discourse on these subjects.

In the latter parts of the book, Smiley designates the Law of Release as the end of ransom. He also asks about the boundaries of the Law of Release: who was to be freed? Were non-Russians included in the law? What would happen to converts to Islam? How would their conversion be proven? These are important questions; however, a reader might also expect to see how Ottoman statecraft and religious authorities such as shaykh al-Islams reacted to the legal changes that came about during post-war diplomatic negotiations. The question is whether the Ottoman Empire was really a gazi state that believed territorial expansion should have been conducted for the common public good and the preservation of Islam? If yes, then the reader also expects to learn whether there was a social-ideological transformation that took place when the Ottoman officials started diplomatic negotiations. How were such social-ideological changes reflected in the religious and political-legal philosophy of the empire?

Smiley's choice of title for his book might be questionable. While it says, From Slaves to Prisoners of War, the discussion concerns war captives, not slaves. He also indicates that his book refers to military captivity in particular, not slavery as an institution. For this reason, some confusion or misunderstanding could arise in potential readers, as not all war captives were necessarily reduced to slavery. Some were ransomed or exchanged, for example. However, if all war captives are being referred to with the word slaves, further clarification is needed earlier in the work.

Apart from these relatively minor questions, its beautifully written language and structure make the book readable, enjoyable and understandable. I hope Will Smiley will continue to broaden our horizons and bring new perspectives to his readers' long-established understanding of history in his future research endeavours.