Ali Yaycioglu : Partners of the Empire. The Crisis of the Ottoman Order in the Age of Revolutions, Stanford, CA: Stanford University Press 2016 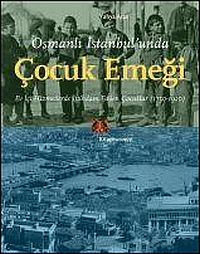 What did child labour mean in the Ottoman context? Where were children employed? How did their Istanbul employers locate the children who they employed? What happened to the children after their term of service? Guided by these questions, Yahya Araz, who specialises in the history of children and childhood, including work on child marriages, the perceptions of puberty, and child education at Dokuz Eylül University in Izmir, Turkey, describes in this work the employment of child labour in domestic service in some Istanbulite households during 1750-1920. Using a diverse body of primary sources; some selected court registries, documentation from the Ottoman Archives and 19th-century periodicals, mainly are journals and newsletters, the Anatolian provinces and Istanbul are brought together into one large picture. Not only the physical spaces assembled in this study but also child studies and labour studies are brought together under the same roof. Some fatwa collections and manuals of legal praxis (sakk mecmualarι) supported the court records. From newspapers and magazines of the 19th century, the author explores the Ottoman central government's response to child employment, which sacrificed the benefit of the intermediaries I the system. Osmanlι İstanbul'unda Çocuk Emeği (Child Labour in Ottoman Istanbul) includes a total of six parts, each of which is engaging and beautifully written. Throughout this work, the reader can enter into the dynamic structure of domestic service, discover how child labour was employed in this sector, and observe as the sector alters and transforms.

The first chapter, "Olguyu Tanιmlamaya Çalιşmak: Tebenni'den İcâr'a" ("Trying to Define the Phenomenon: From Tebenni to İcâr") defines the story being told, basically, that of the role of children in domestic labour and discusses what child labour means in the Ottoman realm. The author endeavours to scrutinise the dimensions of its dynamic structure with regard to the political, economic, cultural, and legal conditions of the transformation that took place in the Ottoman domestic service. The children, who had a written or verbal contract of employment, had varied ages at the beginning of employment, although the girls were usually younger than 10. Minors' contracts were signed on their behalf by either the Ottoman state or their families. Children who had reached puberty, on the other hand, could themselves become a party to their employment contract. Children were paid a wage for their domestic services and thus made a living. Of course, they had the weak side in the dependency relationship fixed by the agreement; however, Yahya Araz shows that they were able to respond to the pressures directed at them. Some unpaid child labourers demanded their wages and fought for them. Although the resemblances between the experience of child slaves and child labourers and their social positions in life were noticeable to the Ottoman state, having a contract was the most fundamental feature that distinguished working children from child slaves. In clarifying this dynamic structure of children's domestic labour, Araz keeps the conditions of the time throughout the book, such as, for instance, the political attempts to end the slave trade by the 19th-century Ottoman central government. The considers the question of what part these attempts to change the slave trade played in the changing the perception of child labourers in the domestic service in Ottoman society. Further, material and moral elements, such as the perception of philanthropy and extraordinary phenomena such as famine, warfare, and forced migration were not excluded in this transformation. The author rightly adapted a gender perspective into his research to better comprehend the selection, employment, and service of child labourers in some Istanbulite households between 1750 and 1920.

In the second chapter, "Arkaplan: Kaynaklar, Aileler, Devlet ve Cinsiyet" ("Background: Sources, Families, State, and Gender"), the author examines the social and economic backgrounds of working children. This chapter presents the background of the system, describes the regions from where the children were taken, and the possible reasons that this was done. In connection with this, Araz seeks to determine the extent to which the effects of these external factors resonated in the domestic labour system. For example, the author considers the famine that took place in central Anatolia in 1845 as a turning point for the increased demand for children in the domestic service sector. Although this is not the sole and absolute reason, families with economic concerns might send their children to work in Istanbul's households through contracts, and this could play an important role in reshaping the very nature of this sector. Beyond this, Araz considers warfare and forced migration to be another determining factor. In particular, the role that the great waves of immigrant children of Caucasian and Rumelian origin in the domestic service sector is described. However, working in domestic service was not limited to orphans or the penniless; instead, this system took shape under the pressure of varying dynamics. The author provides some discussion of the domestic service sector as it appeared outside of the Ottoman Empire, showing that this phenomenon was not unique or peculiar to the Ottoman realm.

The third chapter, "İstanbul'a Ulaşmak: Taşralι Kιz Çocuklarιnιn Göç Ağlarι" (Reaching to Istanbul: Migration Networks of Country Girls) focuses on child mobility between Anatolia and Istanbul. More specifically, it indicates how and by what means children brought from the provinces reached the homes of some Istanbulites. On this account, child labourers were transferred to households through various intermediaries. These intermediaries played an important role in bringing families in the capital and those in the countryside together. The mediation was not monopolised by any particular group; on the contrary, people and groups from very different social-economic strata participated, including parents, relatives, and even government officials. Interestingly, civil servants played a role in this service sector as well. The author rightly situates the increasing range of movement of Ottoman officials through the provinces in the context of the modernisation of the bureaucracy in the 19th century. The author draws attention to a repeating pattern his investigations, namely that, child labourers were provided to Istanbul from the same cities and towns. Observing the employment of boys and girls in the domestic service sector makes it possible, above all, to explore the lives of ordinary people and enable the voices of dependent children to be heard.

After sketching the domestic service system in general terms, the following chapter, "Evden Uzakta veya 'Yabancι' Bir Evde" ("Far From Home or In A 'Foreign' House") enters the households where child labourers were employed, kilometres away from their homes. It sheds light on the families that children serve, children's experiences and what happens to them in the aftermath. This chapter discusses the ways in which domestic child labourers became alienated them from their home regions after they entered their new households. It describes the ways in which working children changed and transformed around new cultural conditions that they encountered as they entered their new homes/workplaces. In addition to this, spatial change played a large part, as the historian shows. The relevant factors here included the size of the household, interior design of the home, and whether there were other servants besides to help regulate the relationship between the child labourer and their owners. The author suggests two novel perspectives on the subject, the first of which is that, contrary to popular belief, recruiting child maids from the provinces was not limited to elite circles. Even modestly well-off Istanbulites were interested in child labour. The other is that the ties between employed children and their families were not completely cut off, in contrast to the popular assumption.

In what follows, in the chapter entitled "Ücretler: Boğaz Tokluğuna Mι?" (Wages: Living From Hand To Mouth), the author presents the wages received by children working in the domestic services sector. In response to the question of what factors might have been most critical in determining the wages of child labourers, Yahya Araz finds that children were categorised to take into account their socio-cultural and geographic backgrounds, and there was a hierarchy amongst different groups. For example, Circassian children received higher wages than children from Anatolia. The author exemplifies other significant factors that affected payment, such as reaching puberty, which is problematised and discussed in detail in the following chapter. Finally, the author argues that the wages paid to children in return for their labour became increasingly monetised over time.

Children's stories did not end when they entered their Istanbul households; perhaps they were only beginning. What happened to the children after they had served the contractually required time? Who decided the children's fate? themselves or their families? following out these inquiries, the following chapter "Yetişkinlik: Yol Ayrιmι Mι?" ("Puberty: A Crossroad?") conceptualises puberty and questions its role in the domestic service sector. The author finds that the legal right to make one's own decisions was acquired after reaching adulthood. Puberty, therefore, was an essential turning point here. Yahya Araz's findings show that children, who generally did not have much choice, continued living in Istanbul; only a small number of them returned to their homeland. They were able to receive marriage proposals during their service; anyway, having a family and establishing a household must have been main goal for many, as the author states. Children were able to marry between the ages of approximately 15 and 20. However, there was a gendered difference here, in that these labourer girls often had to protect their virginity in accordance with the cultural codes of the period; this might have applied to slaves and common people in general as well. Those who married the child labourer girls were often people from the provinces like themselves, who may have been instrumental in finding the families they served in the first place.

This book is an important contribution to the growing literature on Ottoman childhood and studies of child labour. It contains fruitful illustrations, mainly maps, graphs, and texts from archival records or periodicals. It will leave readers with a great deal to think about concerning such extraordinary phenomena as famine, locust infestations, migration, warfare, and its consequences. It will help us in reconsidering the city of Istanbul and its relationship with other provinces along the periphery in different aspects and perspectives. The historian's excavation of his own childhood and contextualisation of his scholarly interests in child labour and childhood makes this work even more valuable. His work also shows his mindfulness of what has been happening around him in the world and his clear awareness of events taking place outside of academia. With a dedication of his book to Syrian refugee children, the author showed that historians' scholarly interests are not randomly chosen and cannot be separated from their own life stories and backgrounds. In my opinion, this well-written academic study should appeal to those who seek to uncover the history of child, childhood, and labour studies to junior and senior researchers, regardless of their academic statuses.