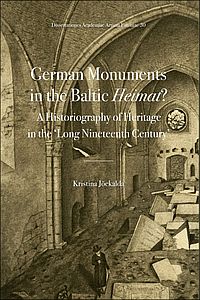 The intertwined character of the early development of art history as a discipline in the Baltic (roughly today's Estonia and Latvia) and the construction of a specific Baltic German identity during the long nineteenth century is at the very center of Kristina Jõekalda's rich and intriguing dissertation in art history. Her doctoral thesis takes the form of a compendium of articles. Five articles, all previously published in peer-reviewed journals, are presented together with a lengthier introduction and a concluding chapter that contains not only the main results from the different case studies but also a discussion of overarching conclusions.

Jõekalda relates to Eric Hobsbawm's periodization and label "the long nineteenth century," which starts with the French Revolution and ends with World War I. The structure of the dissertation is chronological. During that period, profound changes took place; especially relevant here are the beginnings of nationalism and art history as an academic discipline, as well as "the idea of heritage" that can be said to have been a reaction to modernity (16). Heritage is perhaps the key concept in the dissertation alongside nation and Heimat, but the concepts of Germandom, diaspora, colonialism and localism also play prominent roles. However, instead of considering the concepts in isolation from one another or as dichotomies, Jõekalda has a kind of intersectional approach. She explicitly makes a point of both understanding and using the concepts as relational: it is the interactions between them that interest her. In accordance to this there are "three constructive relationships" that are reflected throughout the articles: the first concerns the relationship between art history and heritage studies, the second between the local and the national, and the third deals with the relationship between the Baltic and the German (33-34). This approach is very interestingly discussed in the introduction and its scholarly benefits are obvious in the separate articles. It also makes it possible for Jõekalda to really showcase the complexities and ambiguities that constitute history.

As the main focus is on "popular representations of monuments," the source material being analyzed is composed of published texts, predominantly in German but a few in Estonian. Three types of media are used: "visual histories, writings on the history of art, and publications relating to heritage preservation" (17). Both the sources and the method - close reading and text analysis - are perhaps not what one traditionally encounters in the realm of art history, but they are nonetheless well chosen given the task at hand. In particular, the use of critical historiography with its focus on the complex relationship between the past and history writing is proven to be very useful as a method. The interrelationship between the past, the present and the future is, besides being a constructivist stance in regard to heritage, identity and nation, something that weaves through the entire dissertation.

Article 1 analyses Baltic German visual art in the form of popular albums of sights, a genre that especially depicted local ruins. Architectural heritage and a new interest in local history at the turn of the eighteenth to nineteenth centuries are shown to have played an important role in the construction of Baltic Germandom as a separate ethnicity. The picturesque aspects of old buildings and ruins became a central building block of Baltic German identity. Furthermore, the overlaps between early art history and heritage conservation are highlighted. Art history, however, did not become a university discipline in the Baltic until 1919, but its pre-institutionalized history is discussed in article 2. The blurry lines between history and art history during the nineteenth century are shown as well as the importance of authors working outside academia and learned societies. The interest in the history of art and architecture in the Baltic provinces first and foremost developed outside academia. Here it seems that Baltic German authors' motivation more stemmed from national ideas than followed the latest academic trends in Germany regarding art history. Article 3 is a prolongation of article 2 as it delves even deeper into the early art history texts. The complexities of the Baltic Germans' relationship to Germany proper is highlighted here, as Baltic art could be described as both an inferior copy of German art and as something wholly autonomous: art in its own right. These conflicting stances on the issue of Baltic art could sometimes be held by one and the same author and within a single text. In this context, an explicitly colonial narrative was also sometimes used. The issue of colonialism in relation to the Baltic Germans is an important aspect. Jõekalda contributes not only to art history but to the history of the Baltic Germans more broadly by showing how they used a colonial narrative in regard to Baltic art. However, this is a topic that would have benefited from a more in-depth discussion. For example, the comment that the Baltic Germans' use of a colonial narrative is "somewhat surprising" begs more questions than it answers (p. 109). Given the manner in which the Baltic Germans constructed and actively used history in the late nineteenth and early twentieth centuries in a number of different contexts, it actually seems to be very much in line with their general way of thinking and behavior.

Articles 4 and 5 then shift the focus from art history to heritage preservation. The central role played by Baltic German learned societies as well as by the early art historian Wilhelm Neumann regarding heritage preservation, civic duty and awareness-raising is highlighted in article 4. A number of popularizing texts were published around 1900 about monument preservation, in which heritage was understood as a responsibility. It becomes clear that for the Baltic Germans, their Baltic architectural heritage was closely linked to their ongoing construction of a specific Baltic German identity. J. is not the only one who has made the point that there was a Baltic German nationalism of sorts. Even if they never aspired to establish a nation state, it should be discussed in those terms, and that is what Jõekalda does. The contribution here to the field of nationalism research should also be praised. Despite the fact that article 5 not only takes the Baltic Germans into account but also the Estonians and goes beyond the long nineteenth century and into the interwar period, it works excellently in relation to the previous articles. In the aftermath of 1905 when many Baltic German manor houses were burnt down in the revolutions, both Baltic Germans and Estonians became even more preoccupied with heritage and identity construction. Yet while the Baltic Germans focused on "high" art and architecture, the Estonians instead focused on ethnographical items and archaeological sites. After independence in 1919, the heritage of the previous colonizers, the Baltic Germans, became the property of Estonia and debates over what to do with this "alien past" became more intense.

The fact that the dissertation is a compendium of articles sometimes leads one to occasionally long for more in-depth discussions. However, in most cases this desire is met in the excellent concluding chapter. Both the introduction and the concluding chapter are written with a commendable self-reflectivity that is too seldom seen in scholarly work, at least within the discipline of history. All this makes it an alluring (it is also esthetically beautiful with color illustrations) and fascinating dissertation that actually works well as a monograph, and both can and should be read as such.