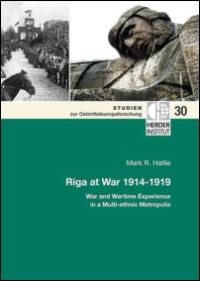 The First World War, the Russian revolution and the struggle for Latvian independence literally, at least in part, played out on the streets of the multi-ethnic city of Riga. During the period from 1914 to 1919, the city and its population lived through mass evacuation, siege, economic decline, starvation, plunder, inter-ethnic tension, violence, terror and a total of seven different regimes. This makes Riga a highly relevant and fascinating object of study.

Mark R. Hatlie's book seeks to provide the reader with two things: on the one hand, a 'description of the major events in Riga', and on the other an 'interpretation of how the three major ethnic groups in the city - the Germans, the Latvians and the Russians - experienced the war' (4). This twofold aim is also evident in the book's division into two major parts. The first part presents a chronological outline, while the second part is thematic, concentrating on the three ethnic groups and their experiences in turn. These are preceded by an introduction presenting the aim and outline of the study, and the book then concludes with a short epilogue.

The book is highly relevant for researchers in the fields of both the Baltic provinces and the First World War. It gives an insight into the everyday experiences of Baltic Germans, Latvians and Russians in Riga during the Great War. Hatlie convincingly shows that the wartime experience in Riga was to a large degree dependent on ethnic identity. What gives the book an edge is that it not only gives important insights into a number of interrelated processes and political events, but that the consequences of these events and processes are viewed from an everyday life perspective. The First World War, the Russian revolution and the struggle for Latvian independence are not primarily discussed in terms of high politics, but rather as they impacted on quite ordinary people living in Riga. Although this "bottom-up" perspective could have been discussed in more depth, especially in the epilogue, it is vital for understanding how these events and processes transformed the Baltic Provinces during and after the war.

Due to the availability of sources, especially personal accounts, the Baltic Germans' wartime experience is the most richly described. The way the source material is used and presented is however somewhat problematical. Descriptions such as 'one witness' (212), 'A Latvian woman' (207), 'a Russian witness' (204), 'one author' (200) and 'an eyewitness' (196) are frequently used, especially in the chapter on the wartime experience of Riga's Baltic Germans. This makes it difficult for the reader to understand the perspective and possible bias of the source in question and therefore to assess their reliability. The ethnic group or gender of the witness cited is not always stated. Sometimes the name and standing in society is made clear, for example the young Baroness von Korff (195). Yet the same source may be presented in different ways, more or less explicitly, at different times, which makes it somewhat difficult for the reader to assess its relevance.

Furthermore, the terms "nationality" and "ethnicity" are used as synonyms, without clarifying whether these are academic concepts based on theoretical perspectives or used as contemporary people would have used them. There is also no real discussion of the terms the Baltic Germans or Latvians used to define themselves, Volkstum and tauta, and how these labels can be linked to "nationality" and "ethnicity". The absence of a serious discussion on these matters leaves the reader somewhat at a loss. Ethnic categorization is highly relevant in the case of the multi-ethnic city of Riga, and there is extensive literature on this for the Baltic Provinces and the Baltic States. The danger is of course that the ethnic groups are seen as more homogenous than they were, for instance in terms of class. Another problem is that the terms 'German' and 'Baltic German' are sometimes used interchangeably, which becomes confusing, especially during the description of the German occupation of Riga.

One of the strengths of the book is Hatlies compelling case that the political scene is inextricably linked with more cultural aspects such as schools, theatres and churches. He describes the Russian perspective as the most elusive, given the scarcity of sources. His discussion on the Russian Orthodox Church in Riga and their conversion campaign where missionaries were sent to refugee camps and military hospitals, however, is very interesting indeed. Another strength is that a gender perspective, not often seen in the literature on the Baltic Provinces, is evident in the very interesting discussion on the Flintenweiber, Latvian women members of a Bolshevik militia unit during the Bolshevik period in 1919. The Baltic Germans saw them as 'the embodiment of evil', a symbol of everything that was wrong (203). Hatlies argument would have benefitted from using, apart from Klaus Theweleit's work from the 1970's, more recent literature, for example, Gay L. Gullickson's study on les pétroleuses of the Paris Commune. [1]

The epilogue sets out to "summarize findings and take the reader to the present cityscape of Riga in search of traces of Riga's early twentieth century wartime" (5). Due to its brevity, however, it does not reach a higher analytical level. It is unfortunate that Hatlie does not use the opportunity to deepen the theoretical discussion on wartime experience in the light of his findings. His decision to dwell on the memorial landscapes of today's Riga is somewhat difficult to understand. The concept of wartime experience admittedly includes pre-war, wartime and post-war considerations, but the book's focus, as the title indicates, is on the war years.

Hatlie stresses that the city of Riga was "caught up in the maelstrom of world politics" (311) and that the course of events in Riga during the period between 1914 and 1919 was not caused by inter-ethnic tensions or conflicts. He is adamant that the city was not at war with itself (311). This argument that Riga should rather be seen as a playground for forces beyond its inhabitants' control is a very sound one and is substantiated by compelling evidence. Nevertheless, the proposition also poses a number of intriguing questions, which Hatlie could have addressed in more detail. What is a city? Is it just the sum of its population and its buildings or is it something more? The book does not really create a feeling for the city of Riga. This is partly due to the absence of street maps from the period. There are only two schematic maps, of Riga and of historical police districts. For the reader to see what Riga looked like, it would have been nice to have more photographs of street views.

Regarding Riga as a place, a home and a symbol, Hatlie makes a very interesting point. While, even before the war, the Baltic Germans valued Riga as a special place, a Heimat, this does not seem to have applied to the same extent for the Latvians before 1917 or even 1919 (274). This perceived difference could be due to the uneven distribution of different types of source material between the ethnic groups, and a discussion of this would have been interesting. The aspect that Hatlie highlights, of Riga as a home and how the city's different ethnic communities perceived it, is worthy of further study.

Riga at War is a fascinating and important book, but it does not reach its full potential. Nevertheless, a good book leaves the reader not only with answers but also with questions.