John Haldon: The Empire That Would Not Die. The Paradox of Eastern Roman Survival, 640-740, Cambridge, MA / London: Harvard University Press 2016 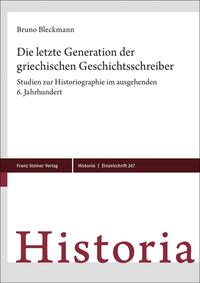 As one of the directors of the project Kleine und Fragmentarische Historiker der Spätantike (Düsseldorf), Bruno Bleckmann ranks as a leading expert on Late Antique historiography. The present monograph is a by-product of Bleckmann's work on a new edition of the fragments of Menander Protector (with Markus Stein). The breadth of topics that he broaches in this volume and his careful argumentation bode very well for that edition.

At the heart of this book lies a traditional question, that of the end of ancient historiography. When did the ancient tradition of writing history come to an end? The question should be parsed carefully. Ancient historiography was traditionally seen (and still is in many quarters) as the form of history writing most akin to our modern one. Hence, talking about 'the end of ancient historiography' implies a value judgement about what comes afterwards. Such normative assumptions are visible in the fact that the end referred to is normally taken to be that of Greek, classicizing historiography in Late Antiquity, with Theophylact Simocatta, writing a history of the reign of the emperor Maurice (582-603) under that of Heraclius (640-641), as the last of a long tradition. That ecclesiastical historiography ends around the same time rarely enters into the equation. Indeed, Evagrius Scholasticus (writing after 595) is the last Greek church historian for a long time. Ecclesiastical historiography is in the first place a Late Antique genre, and far less a medieval one - contrary to the tacit assumption that it is, somehow, a Fremdkörper within ancient historiography.

B. Bleckmann offers a carefully pondered answer to the question, which is addressed most explicitly in the first, introductory chapter. In it, he displays a cautious optimism about the state of historiography throughout Antiquity: we cannot conclude from the absence of evidence for historiography that no histories were written in a particular period. The writing of history in Antiquity was hence a continuous practice. This does not mean, however, that the production of historiography is spread evenly: particular events can cause a spike in history writing, as may have been the case for Julian's Persian campaign. Whilst I agree with the thrust of Bleckmann's argument, continuity of a cultural practice does not need to mean that histories were written continuously. Education, with its focus on the canonical authors such as Herodotus and Thucydides, may also have kept the cultural practice alive. Bleckmann adds useful nuance to the idea that classical historiography explains events through human or social causality, whilst Christian historiography invokes supernatural causality. He shows that the latter can also be found in ancient historiography, whilst the former does not disappear - also not in ecclesiastical historiography. It will be hard to define the end of ancient historiography in these terms. [1] In his conclusion, Bleckmann espouses a social criterion for the end of ancient historiography, namely the shrinking of the empire and the change of the elite that had, hitherto, been the carrier of historiographic discourse.

The six main chapters take up particular topics. The second chapter provides a brief sketch of two successors of Procopius, Agathias and Menander Protector. Menander is preserved in fragments, although some of these are very extensive. The fragments show up a particular interest in diplomacy, but that may be due to selection bias, given their preservation in the excerpt collection of Constantine Porphyrogenitus in the 10th century.

Chapter 3 argues for the attribution of the speech of Emperor Justin II in 574 on the nomination of Tiberius II as Caesar, found in Theophylact Simocatta, to Menander. This is plausible, given what we know about Theophylact's use of sources. Theophylact's version is then compared with the other versions of the same speech, found in John of Ephesus and Evagrius Scholasticus. Theophylact clearly seeks to underscore the legitimacy of Tiberius' accession. Bleckmann interprets this as reflecting the thrust of Menander's representation, who was writing under the Emperor Maurice, who had been chosen by Tiberius and was his son-in-law. The traditional ancient practice of writing panegyrically about the living ruler is at play here.

Chapter four explores the presence of Christian elements in Menander's history. As Bleckmann noted in the introduction, classicizing historiography long tends to exclude Christianity from its perspective, even when it was written by Christians. By the end of the sixth century, by contrast, Christianity cannot be kept out of the narrative anymore. In Menander this is visible in several instances, such as his account of the relics of the Holy Cross. What remains absent in Menander, however, is the explicit mention of the intra-ecclesiastical controversies, especially between Chalcedonians and Miaphysites. Bleckmann attributes this to the fact that the historian espouses imperial ideology which postulated the absence of such differences in the Empire.

In the fifth chapter, B. Bleckmann compares Menander to two contemporary historians, Theophanes of Byzantium and John of Epiphaneia, who covered partially the same events. Very little remains of the histories of these two, so any analysis must remain tentative.

The same theme is pursued in chapter six, in which Bleckmann shows how these historians give conflicting accounts of the role of the general Marcian in the war with Persia of 572. Whilst Theophanes of Byzantium and John of Ephesus offer favourable accounts, the others are dismissive.

The last chapter is a brief discussion of Theophylact Simocatta, the last classicizing historian of late Antiquity. The features of his work can be seen as further illustrating tendencies that are also visible in the historians preceding him. For example, the occasional mixture of prose and poetry occurs in George of Pisidia and in Menander, whilst the growing prominence of Christian themes was already explored by Bleckmann in chapter 4. I am not sure that Bleckmann's identification of the dedicatee with the emperor Heraclius is correct; patriarch Sergius still seems to most logical candidate.

Besides the specific arguments made in the individual chapters, Bleckmann's careful and lucid study will also be useful as a general introduction to the classicizing historians of the late sixth century. Hopefully, Bleckmann's spirited defense of the continuity of ancient historiography will draw more attention to these historians, also from classicists working on 'classical' historiography - and thus, maybe, expand the modern canon of ancient historiography. The forthcoming edition of Menander will, undoubtedly, be another important step in that direction.

[1] On 89-90, however, Bleckmann seems to take the espousal of human causality as the main criterion to judge if a history still conforms to the principles of ancient historiography.