Made in Germany - Sounds German 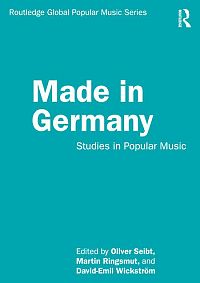 What does music say about German identities (plural)? Would it be nihilistic to argue that there is no such thing as a national (or typically English, German or French) soundscape? How different are the ways people in those countries perform, listen to, or think about popular music? Today, origin has a minimal impact on reception and reach. Is music not consequently more reflective of urban/rural, class, gender or sexual identities than of "national" differences? In 2022, musically, we are spoilt for choice: listening to albums, concerts and radio stations can be achieved with a few clicks of a mouse. The existence of so many exotic, cross-cultural hybrids can bring out the taxonomist in music scholars. We can easily get carried away in documenting every minute shade of nuance in a bewildering array of genres (from folk to metal to rap). The two (distinct but complimentary) books under discussion are not alone in asking what Germany sounds like. One is by German insiders, fusing music history with musicology; the other reflects a passion, for studying popular music as a form of Germanistik, pursued predominantly by non-German outsiders. One is a self-critical reflection on "us", the other is a loving representation of "them".

Both books use taste in music to explore and dissect "Germanness", that peculiar (and often problematic) set of identities. Exploring the connection between sound and place, they unravel the conflicting experiences of being German but consuming transnational popular culture. They stress the plurality of modern "German" identities. Attempting to define Germanness also, if implicitly, involves identifying both real and purported "others", whether black, Jewish, gay or transsexual (Made, 11). Not only did the cold war give the world two separate and antagonistic German states, but the postwar Germanies also acquired, to varying degrees, diasporic post-migration communities. Each had its own musical preoccupations and influences, together with gender politics. Songs like "Industry Girl" and "Back to Concrete" reflect a changing and uncertain social climate, with evolving concepts of the body, gender and sexuality, amid a sometimes harsh and unstable urban environment. 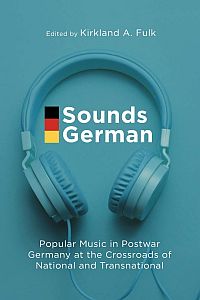 Even when produced in Germany, or by "Germans", popular music has important (trans)national dimensions. Music incessantly crosses borders, communicating between different cultures and creating novel identities expressing hybridity and symbiosis. Some of the "imaginary communities", created by music produced in Germany, truly transcend social, spatial and geographical barriers to create a novel and sublime "poetics of place". We each have our favourite example of cross-cultural contamination or pollination: whether Krautrock's transatlantic bite, David Bowie and Iggy Pop's late-1970s Schöneberg sojourn or the remarkable impression Kraftwerk managed to make on post-industrial Detroit. With the afterglow of nostalgia, these acquire almost mythic status. As Kodwo Eshun has argued, as a cradle for inter-cultural creativity identified and celebrated by worldwide aficionados of Techno, Düsseldorf is on a par with the Mississippi Delta. Although both books focus explicitly on the national, another approach would be to focus on the sounds of specific German cities. Leipzig sounded very different to East Berlin, just as the early-1960s "Hamburg sound" was distinct from that of Cologne. In part, the existence of a multinational audience within specific parts of Germany was a consequence of the cold war. This poses the question: are diachronic changes more important than synchronic differences?

Whether pursued by insiders or outsiders, such an approach cannot escape peculiarly German (and thus especially fraught) debates about national identity. Faced with such a complex, painful past, Germans have no choice but to be political even in relation to something as flimsy as pop. Lyricism "after Auschwitz" may (pace Adorno) have been "barbaric" and yet, for some, it functions, almost magically, as a healing balm for an injured and deeply wounded identity. Can David Hasselhoff belting out "Looking for Freedom", at the Brandenburg Gate in 1989, heal the lacerations enduring from catastrophic defeat and decades of ensuing division? According to one implicit viewpoint, by helping to reconstruct the German soul, music can somehow assuage guilt and mend the rifts and torments left behind by Nazi genocide. Transnational musical influences are seen as crucial in reconstructing a valid, cohesive and internationally acceptable identity. As solutions go, the "resurrection through musical appreciation" option is not without its problems. Reggae and rap are excellent vehicles for combatting racism in Germany, for example, but can contain homophobic, misogynistic or anti-Semitic elements.

Stretching from Weimar to the post-unification period, Made in Germany has a longer durée than Sounds German. It is clinically precise and meticulous in pinpointing its target: "Not all popular music that is 'made in Germany' is considered to be 'German popular music' and not all popular music that is considered to be 'German' is necessarily 'made in Germany' (8)." In identifying how ethnic, cultural and linguistic identities overlap and interact, the editors point to several juxtapositions or binaries: explicit vs. implicit, insider vs. outsider, inclusive vs. exclusive, ethnic vs. cultural, "biological" vs. naturalized Germans (12, 8). Whether in the form of hit shows, looping or "Tamizdat" (the spread of bootleg, homemade tapes), Sounds German is more attuned to particular technological aspects of delivery beyond the (geo)political. The cold war proved that radio waves (and the sound-based cultural innovations they carried) could not be stopped at the border. It also permitted and encouraged GIs to make local friends, by playing in down-at-heel, provincial clubs.

During the cold war, international musical influences both affirmed and subverted (East and West) 'German' values. Generations of Germans embraced foreign music in an effort to escape the past. In the accounts of the original rockers, "their" new music cut through the provincial fug (Mief) like a switchblade, redefining lived identities for young Germans, on both sides of the Iron Curtain, and metaphorically releasing them from the "prisons" of class and gender. Today's "culture war" is nothing compared to the clashes between would-be defenders of music, as a source of enlightenment and education, and those unruly teens, who simply used it for entertainment and liberation. As well as a powerful discursive raison d'être, music had a marked hegemonic function. In charting the soundtrack to subcultural provocation and rebellion, generations of Germans distinguished between the tastes of their grandparents and parents, on the one hand, and their peers, on the other. In assessing the impact of music on diffuse German mentalities (shaping both mindsets and behaviour), more attention could be paid in both books to black music's special usage (and valence), as a means of escaping the shackles and mental straightjacket imposed by post-Nazi German-ness. Rock 'n' roll and, to a lesser extent, jazz offered a release from certain inhibiting restrictions (on physical expression, dance and sociability). In the mid-1950s, music of black origin replaced Jewishness as the racialized "other" in standard cultural thought ("Schaltet diese Negermusik ab!"). Ambivalently, American(ized) music represented both a bolt for freedom and a form of idiomatic submission.

The framing of Made in Germany is more explicitly and overtly political, depicting a society that is increasingly polarized and divided. In their introduction, which is strongly reflective of 2019, the editors are particularly focused on the extent to which music questions or challenges contemporary notions of national identity. If this reflects a certain reflexive Germanophobia (or at least ambivalence), Sounds German is more unapologetically celebratory (and Germanophile). There is no question that music matters and helps to reflect on German development(s), but we can ask whether the analogue cultural/musical transfers - such as the Beatles performing in raucous St. Pauli - were more significant than today's less strenuous digital "pick and mix" sampling of global styles. Any study of the German music scene, now or in the past, is necessarily selective. Yet both books point to the richness and fecundity of a fascinating and evolving field.