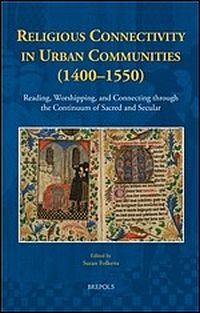 Two major themes dominate this volume of articles which are based on presentations given at a September 2015 conference at the University of Groningen. On the one hand, there is the issue of networks, on the other, the interlacing of the sacred with the profane in the late Middle Ages. As much as a major storm was brewing during the fifteenth century directed against the Church, particularly urban communities all over Europe witnessed a remarkable growth of lay spirituality grounded in many different social and religious groups. The new media of the printing press made the large-scale communication among those networks possible and marked that period distinctly. As the editor Suzan Folkerts emphasizes, we can comprehend late medieval society much better when we use the lenses of connectivity and urban communities. The brief introduction is, unfortunately, just that, very brief, and even poor with respect to the relevant research, often referred to only via secondary sources. It is not always clear what Folkerts is trying to say, so when she emphasizes "Catholic theologians' fear for [sic] laypeople's speech and knowledge of dogmatic matters" (19).

The actual contributions, by contrast, prove to be solid studies, always introducing a host of primary sources and engaging critically with the relevant literature. However, there is no sense as to the thematic grouping of the studies, and there are neither chronological nor geographic criteria that would explain their arrangement. There are ten articles, all in English, consistently concerned with the two issues at stake: communal network and the interrelationship between the sacred and the profane.

Both in Northwestern Europe and also in Italy, religious confraternities began to play a major role, as Marina Gazzini illustrates, whereas Cora Zwart studies the dimension of personal religiosity in the life of the Alderman and Mayor of Utrecht, Dirck Borre van Amerongen (ca. 1438-1528), which connected him and his family with various groups in the city. But would we need to be reminded of the great importance of religion for late medieval people, as Megan Edwards Alvarez does in her study of the fleshers in Perth, Scotland? Not only were they responsible for the production of meat for the urban population, but they also stood out as a guild and hence as yet another social group. The article, however, then moves into all kinds of direction of the history of religion in Perth, and this far into the seventeenth century.

Much more interesting proves to be the study by Johanneke Uphoff about book donations by laypeople of both genders to religious communities because this phenomenon illustrates the close connections between both worlds bonded together through a "cooperative piety" (100), a brilliant formulation, expanded then into the concept of a "shared culture of devotion" (103). Uphoff examines, for instance, the spiritual purpose of such donations (memoria), the role of the family, and the practice of donations.

An-Katrien Hanselaer brings to light the community of the Tertiaries of Sint-Catharinadal in Hasselt, founded in 1430, who grew out of a lay group and increasingly turned to an "inner-worldly asceticism" (126). To support their devotion, the members were intensively dedicated to the creation of manuscripts, mostly compilations of previous religious works mostly serving the liturgy. The influence of the mystical works by Alijt Bake, the prioress of the Windesheim convent of Galilea in Ghent (1445-1455), does not only reflect the extent to which those women were well connected with each other, but also illustrates the high level of education by those Tertiaries. Their preference of Alijt Bake's works indicates, as Hanselaer brings to light, their rather relaxed attitude toward mysticism. Moreover, which is truly important to consider for future research, here we face evidence of entire religious female communities in open communication with a wider network of writers and readers.

The intellectual and artistic exchange between the sacred and the profane found also vivid expression in the phenomenon of contrafacta of worldly song melodies for religious songs in the late Middle Ages, as demonstrated by Cécile de Morrée. She discusses that phenomenon in light of late medieval Dutch works, but does not realize that both musicologists and Germanists, for instance, have dealt with contrafacta already for a long time, such as in the case of the poet and composer Oswald von Wolkenstein (ca. 1376/7-1445). However, de Morrée brings to the table primarily examples from beguinages in modern-day Belgium, adding further support for the argument of a close connection between the sacred and the profane in late medieval cities.

From here Delphine Mercuzot jumps to the publications by the famous English printer William Caxton who made much money through the sale of indulgence forms, pilgrimage badges, and hagiographical texts, such as his Life of Saint Winifred (with a detailed book description in the appendix). Although Luther and his compatriot Reformers had some of their greatest success with the sharp criticism of indulgences, in the late fifteenth century those little printed texts supported religious communities and created a strong sense of cohesion among the faithful.

This is followed by Elsa Kammerer's examination of the genre of Figures of the Bible in close proximity to emblem books sold at book markets in Lyon, Frankfurt, Strasbourg, and later Antwerp, mostly during the sixteenth century, with the printers directly competing with each other, though probably also in a professional support group. In this case, as the author observes, the readers' interest mostly focused on the historical knowledge of the Bible and on the aesthetics of the illustration program. Often these Figures were used as libri amicorum, that is, as a kind of autogramm albums for circles of friends who thus wanted to guarantee the mutual memoria over physical distance. The illustrations were both biblical and classical, which created interesting bridges between the sacred and the profane.

Marĺa José Vega discusses the literary tradition of the "coalman's faith" in its many different manifestations in late medieval and early modern Europe, happily employed even by the most famous theologians to highlight the value of the layperson's true faith, often superior to that of the learned. In that sense it was clearly a favorite of the Lutherans, whereas the Catholics condemned all suggestions to allow laypersons to discuss matters of faith. Finally, Suzan Folkerts offers a study of the reading circles in late medieval Deventer working with vernacular translations of the New Testament, especially the Epistles and the Gospels, which indicates how much the entire secular urban community was dedicated to religious instructions on its own.

The volume concludes with an index of manuscripts, archival sources, and copies of incunabula (why "copies of"?) and an index of names and places, which is very welcome, but it lacks a good number of personal names mentioned in the various contributions. The collective of contributions certainly achieves its goal to demonstrate through many different lenses how much the late Middle Ages were strongly determined by urban community building and the merging of the profane with the sacred.