Patrick Zutshi: The Avignon Popes and Their Chancery 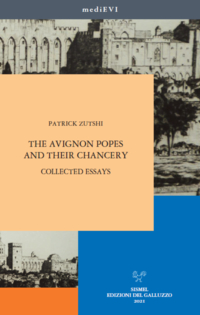 Keeper of Manuscripts and University Archives Emeritus at Corpus Christi College, University of Cambridge (UK) Patrick Zutshi proposes in this volume a collection of previously published essays examining the documentation produced by the chancery of the Avignon papacy. The volume spans the fourteenth century with forays into the preceding and succeeding periods. Since the selection comprises some thirty years of research, the author has corrected, revised, and updated 18 articles to current historiographical standards. The two remaining articles, "At the Point of Death: Licences to Choose a Confessor in mortis articulo Issued by the Avignon Popes," and "Autograph Letters of the Avignon Popes," are published here for the first time. Patrick Zutshi is interested foremost in diplomatic, the study that aims at reconstructing the procedures behind the drafting of medieval documents, and by consequence aims at recovering the historical nature of documents. His essays are abundantly footnoted, even though the volume lacks an encompassing bibliography - a short, "select bibliography" ends the introduction. Many essays are followed by appendices that offer the author's edition of numerous specific documents - rending thus a great service to scholars and researchers. The volume closes with an index of manuscripts, and a separate index of persons, places, and subjects.

The Avignon Popes and Their Chancery is organized in five sections. The volume starts with an informative survey of the Chancery's growth from the late twelfth to fifteenth century, highlighting the role the Avignon papacy played in its development. The essay reviews the types of letters it produced, the men involved in the many stages of production, including the ever-present proctors who served as intermediaries for the granting of a papal documents. As Zutshi insists throughout the volume, most papal letters responded to petitions beseeched from the curia, underscoring the essential point that only petitions that had been approved were actually registered in the volumes that we still find at the Vatican. And of course, the Chancery was not alone in producing documents, so did the Apostolic Chamber, the Penitentiary, and the tribunals.

"Petitions and Registers" opens the first section with five papers focused on the why, what, how, when, and where of the petitioning business. In its first essay, the author details the petitioning mechanisms, and this short article is a nice introduction to the field. The author then moves to the pope's involvement in the signing of petitions, starting with the earliest fiat recorded, penned by Clement V. Why the curia started to register petitions, and how petitions were presented continue the investigation. The most important article of this section may be the last one. Here Zutshi traces over the longue durée (the entire Avignon papacy) the evolution and changes in the processes of registration. He highlights the importance of annotations found in the registering of the petitions that may refer to excerpts from the original petitions, while the last section of the article (117-138) attempts to reconstruct how the letters that responded to these petitions (common letters) were registered. Any student interested in the inner working of papal letters' registrations will need to read this article.

The Second section moves to the production issued from the Chancery. The first article is limited in scope - Clement V and letters found at the National Archives (Kew, GB) -, but does show how the Chancery stuttered at the beginning of Clement's reign, evidenced by the number of anomalies found in the letters under review. The second article underlines the scope of the activities supported by the notaries of the Chancery. For readers interested in medieval notaries, the essay, while somewhat overly technical and limited, offers an introduction to further in-depth analyses like Laurie Nussdorfer's Brokers of Public Trust. Notaries in Early Modern Rome (Baltimore, 2009). Students of medieval death will appreciate the closing essay on the naming of confessors in mortis articulo.

The third section may be the book's most restricted, essentially focused on the pope's personal involvement in the drafting of letters. It includes a discussion of the political and administrative correspondence of the pope, and the letters popes wrote on their own. Again, the first article, "The Personal Role of the Pope in the Production of Papal Letters in the Thirteenth and Fourteenth Century," would be a good article to assign an introductory class on "Diplomatic", if such course still exists. It is notable that Zutshi concludes that the popes' handwriting was not that significantly different from their scribes. Of note also, is the usage of the popes' personal wax seal in certain "private" circumstances, preferred over the papal lead bulla.

The last two sections are focused on the author's main area of expertise, English history. Taken together, these sections offer information on the use of the papal letters as a source for English history, with a special emphasis on proctors for English petitioners, and the identification of English related documents in the papal archives, including collective indulgences granted to English petitioners. The three closing essays concern the history of the University of Cambridge, as a studium generale, and the role the Mendicants played in the university's medieval history.

It is not the point of this review to address the quality of the author's diplomatic analysis; it would be a futile exercise, it is impeccable. Patrick Zutshi is a professional archivist/paleographer who knows his trade very well. What I may highlight is the limited scope of the presentation of the material. Each article offers a lesson in "how to read" (in its broadest sense) a medieval manuscript; but what is lacking is the "so what" historians will ask, the synthetic view. Buried in the details of analyses the author states page 274, "A knowledge of the papal administration and particularly of the process in the chancery and other departments of the curia by which the letters were issued, will assist the historian to avoid misunderstandings about the letters and to maximize the information that can be extracted from them." Placing his own contribution within this historiographical framework would have highly enhanced the material presented and underscored its importance. In addition, the author would have gained in at least mentioning why the letters are relevant to questions posed by the modern historiography. Buried in them are information regarding, for example, the conception of the body, or gender. Urban V obsession with short tunics would be a fitting example (see 190).

Another, maybe more pressing issue, will interest specialists of the Avignon papacy's governance. Most assume that the Avignon popes grew and centralized their administration. The author's knowledge of the functioning of the curia puts him at a leading advantage to address this centralization and engage its historiography. But Zutshi rarely does it holistically and seems to resist synthesis. At the end of his essay on the personal role of the pope, Zutshi concludes "Nonetheless, there is a danger of exaggerating the bureaucratization of the papal curia. The nature of this danger may become clearer if one compares papal administration with that of secular rulers." (224). This small sentence throws a challenge to the historiography but does not really respond to it. While most of his essays are demonstrating a relatively high level of administrative sophistication and bureaucratization at the chancery, why would the author suggest the contrary? He labels the papal bureaucracy monolithic, domestic (it still held the character of household administrations), closely tied to its ruler, and mobile, thus not centralized. It seems to this reviewer that these qualities earmarked the pre-Avignon papacy, while it is in Avignon that the administration settled down and somewhat detached itself from its ruler - like secular administrations did. When Urban V left for Rome, a system of governance remained in place in Avignon (Avignon kept the Treasury and scores of Apostolic Chamber and Chancery employees). The pope understood the dangers of moving the whole curia at once. This, for me, is evidence enough of a rather sophisticated conception of what "administering" meant.

Notwithstanding these last remarks, this volume will become essential reading to students of the arts of diplomatic, and of the fields of Avignon and its papacy. The abundant details and editions will guide quite a few scholars toward a better understanding of the fourteenth century papal administration, and of the documents it produced.