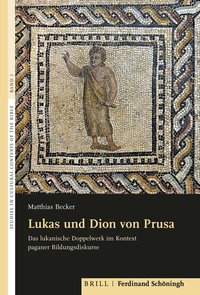 Current research into the New Testament has shifted focus from an older paradigm that viewed the New Testament writings as "Kleinliteratur" (2) toward defining Christianity as a "Bildungsreligion" (3), due to the extensive literary production of early Christianity. Scholars have generally understood the anonymous author of the Gospel of Luke and the Acts of the Apostles (Das lukanische Doppelwerk) as being an educated author, yet the extent, content and reception of this education is a matter of debate.

This is where Matthias Becker's Habilitation thesis, Lukas und Dion von Prusa: Das lukanische Doppelwerk im Kontext paganer Bildungsdiskurse has its starting point. The monograph asks if the author presented his Christian message in such a way that a Greek educated audience could understand it: "für ein urbanes christliches Publikum mit paganem Bildungshintergrund verständlich und plausibel" (1). This is not obvious, even in light of the author's literary competency, since the argument consistently refers to and assumes knowledge of the Septuagint, which some have argued was incomprehensible to contemporaries unacquainted with the Biblical heritage (6).

The comparison is a tour de force of 600 pages where Becker addresses 42 topics categorised under three main headings: rhetorical- (part II) ethical- (part III) and theological- (part IV) educational themes. His methodological approach is three-pronged, applying first the concept of double-coding of concepts or "ambivalence sémantique" which he explores lexically, sequentially and thematically (25-35), secondly thematic and diachronic observations along the aforementioned categories (35-44) and third through a reader-response critical approach, imagining an educated audience ("gebildete Heidenchristen") and differentiating between the intentions of the text (intentio operis), the author (intentio auctoris) and the recipient (intentio lectoris) (35-44).

Rhetorical approaches have for example highlighted the structure of the Pauline speeches in Acts and compared them to rhetorical education, but Becker goes further and situates the discourse in the educational expectations behind his comparandum. Dio's Discourses contain common topics, both on the formal level through analogies and metaphors (92-100) and through rhetorical methods of persuasion (101-120).

The ethical dimension is an expected point of overlap between Luke-Acts and popular philosophy and Becker identifies 14 main topics that correspond with Dio's ethical teaching, such as wealth and poverty (141-185), marriage and sexuality (187-228), hubris and humility (228-237) and ethical norms of behaviour between humans and god(s) (288-306).

Through all of these parallels Becker asks if it is plausible that a Greek educated reader would understand the imagery and references and his answer with the help of Dio's Discourses is a consistent yes. The Gospel of Luke and the Acts of the Apostles, have quantitatively more material to offer than the other synoptics, which shows linguistic and discursive overlaps with the textual products of educated pagan contemporaries (634).

The strengths of Becker's monograph are on the one hand the deep insight that he has into both New Testament exegesis and the interpretation of classical sources. The monograph is in that sense enlightening to both fields and facilitates a new conversation about the commonalities of Christianity and popular philosophy in the 1st century CE. On the other hand, the focus on content is the strength of his comparison that goes beyond a question of formalities, such a genre and authorship, to ask what is comparable in the message of these traditions. The wealth of theological material that he compares is in that regard both surprising and challenging to scholars of Christianity and philosophy.

The lack of attention to formal categories simultaneously presents a challenge with regard to Becker's work. The parallel content raises the question of how to account for the commonalities with regard to the different genres and purposes of these authors. Becker does not engage with or cite key commentaries that have in current scholarship raised the issue of genre and the hypotheses about the authorial intent involved in these classifications. [1]

A second issue that Becker does not solve, but circumvents, is the Septuagint background of Luke's writings. He mentions this problem in his introduction with reference to older scholars (6), and claims that his comparison shows what is understandable to "heidenchristlichen Rezipienten". This is true, but if with "heidenchristlich" is meant an audience that does not have access to or knowledge of the Septuagint, the question still remains if the material that is based on the Septuagint, whether explicitly or implicitly, is understandable to such readers.

From the perspective of current research Lukas und Dion von Prusa is set to become a standard work on the comparison of early Christian literary production and contemporary popular philosophy and its clear structure allows for it to be read as a consistent argument as well as used as a reference work.