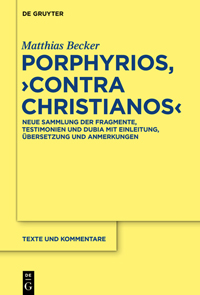 Less than two years after his impressive annotated German translation of Eunapius' Lives of philosophers and sophists, [1] Matthias Becker now offers a new edition, with introduction, translation and commentary, of the remains of Porphyry's lost treatise Against the Christians. This edition may add to the revival of interest in this treatise - an interest illustrated by two recent international colloquia held in Paris [2] and Tübingen. [3] It is meant to replace the one published by Adolf von Harnack exactly 100 years ago. Many such editions were undertaken but given up in the past, and some - of varying quality and seriousness - have been published in the recent years (Hoffmann, Berchman, Ramos Jurado et alii, Muscolino), and at least two others are forthcoming (Johnson, Morlet), but the present one should be considered as the most complete and best documented so far. The introduction deals with all the historical and philological problems raised by the Contra Christianos and offers original reflexions, inspired by modern sociology (W. Schirmer), on Porphyry's attitude in the face of the major threat posed by Christianity to the ancient political and religious order (32-85). Becker sensibly rejects many recent speculative hypotheses, including: its redaction as a compilation that included many other treatises by the philosopher; the date of the treatise; the suggested Sitz-im-Leben in the planning of Diocletian's persecution; or the identification of Porphyry with the anonymous philosopher depicted by Lactantius.

The original texts in Greek and Latin are taken from the most recent editions, but printed without a critical apparatus. An exhaustive up-to-date bibliography and four indices ("Stellenregister", "Namenregister", "Geographisches Register", "Sachregister") complete the volume. A helpful concordance of the fragments with the former editions by Harnack and Ramos Jurado et alii [4] (108-112) can be used to facilitate consultation of a somewhat complicated distribution of the texts. [5]

Collecting the testimonies and fragments of such a treatise is a very risky, if not impossible, task. All through late Antiquity and the Byzantine era, Porphyry was labelled the chief opponent of Christianity, but already under Constantine, the treatise was condemned to be destroyed. In addition, Methodius, Eusebius and Apollinarius wrote refutations of it, and it seems that the treatise was available later on only through these Christian witnesses. An edition restricted to certain "fragments", in the sense of direct extracts from Porphyry's treatise, would keep only a handful of Eusebian quotations. The present edition qualifies as fragments some twenty texts where a φησιν justifies the addition of quotation marks, but most of the time we do not know where and how the author was able to read such a text. Sometimes Porphyry is mentioned along with other opponents to Christianity such as Celsus, Julian or "Philosabbatios", and at other times his name just serves to characterize an attack as typically pagan. To confront this situation, instead of the thematic ordering of Harnack's edition, Becker has divided his corpus into three sections: I. Texts with reference to a specified book of the Contra Christianos (supplemented by a few close parallels): 46 fragments or testimonies; II. "Porphyrian" objections without explicit reference to a singular book: 35 texts; III. Dubious testimonies: 51 texts. This division helps to build the reconstruction of the lost treatise on a more solid methodological basis, even if it isolates related texts, like all the fragments borrowed from Jerome's Commentary on Daniel (the continuous fr. 43 Harnack), in three separate sections, thus dispersing Porphyry's objections on a same topic throughout several sections.

The actual content of Becker's collection is quite different from Harnack's selection. For the first time, he adds all the texts identified as Porphyrian by recent scholarship (some forty new fragments), discards a few passages of scant reliability in the former editions, moves many anonymous fragments taken into account by Harnack to the "Dubia" of its third section, and eliminates all the anonymous pagan objections borrowed by Harnack from the Apocriticus of Macarius of Magnesia: some fifty different attacks that amounted to one half of Harnack's set of fragments. There is some ambiguity in deciding which fragments should be considered as "dubious": is it because we don't know if it really refers to Porphyry's treatise and not to another text, or because its content cannot be authenticated as reproducing Porphyry's own point of view? Most of the texts of this third section are there because they lack an explicit reference to Porphyry. But fr. 132D Becker refers clearly to Porphyry's attacks against the Christians. What we can possibly doubt (with Chr. Riedweg) is that Damascenus Studites transmitted an authentic Porphyrian objection and did not insert his name in place of the impious theomachoi who figured in a passage of Gregory of Nazianzus quoted in the same context. But on this account, a perfectly referenced fragment of the first section, such as Becker's n° 12 (fr. 40 Harnack), where Eusebius says explicitly that Porphyry, in book 4 of his Contra Christianos, dated Moses 850 years before the Fall of Troy, should be termed dubious, since such a dating is plainly not Porphyrian, but results from a deduction from a preserved statement of Porphyry (= fr. 10-11 Becker) by Eusebius using his own different chronological data. Other fragments of this section (like those claimed to be Porphyrian by Altheim and Stiehl: fr. 130D et 131D, or three others proposed by Nautin: fr. 89-91D) are kept in this section, even if Becker doesn't agree with their Porphyrian authenticity. A new fragment from a Homily of John Chrysostom on John 17, 3-4 recently discovered by Chr. Riedweg (and published by Becker with his authorization) could also have figured in the third section with many other anonymous fragments rather than in the second one, although there is good reasons to think that Chrysostom had Porphyry in mind.

But the most delicate choice was to leave out of the corpus all the objections of Macarius Magnes' pagan opponent. It is admittedly a justified decision, since these objections are anonymous (like many others of the third section of the corpus, one must say) and since Macarius has obviously adapted the style and also the very content of these objections to his own literary setting. But these objections are genuinely pagan, are quite homogenous (seeming to come from a same author), betray an erudite and "bookish" approach of Christianity and a good knowledge of the sacred Scriptures, appeal to well-identified philosophical, and even neoplatonic, ideas that Macarius often misses when he tries to answer them, and it is with Porphyry's otherwise well attested fragments that they offer the most exact parallels, sometimes in the very wording they use, as Becker must often acknowledge, since he quotes extensively and translates in his commentary at least twenty-two of Macarius' objections as close parallels to the fragments of his edition, and refers to many others. In fact, most of the other objections of the Apocriticus offer similarities with authenticated fragments, and it is difficult to find a better source for them than Porphyry. A no less scientific solution would have been to add to the edition a fourth section dedicated to this material, generally attributed to Porphyry since Harnack, at the risk of having to enrich the corpus with many other texts, similar in content to Macarius' objections - for instance, the philosophical criticism that Christian eschatology would disturb the natural (vertical) order of elements, an objection that Augustine attributes to pagan ratiocinatores from Plato's school in which Jean Pépin recognized Porphyry. Removing all these objections from a reconstruction of Porphyry's Contra Christianos means depriving the reader of a large part of the material on which he should apply his own judgement.

Given their polemical nature, it is generally difficult to tell if an objection is in accord with Porphyry's philosophical or religious viewpoints. Similar objections can be conceived from a Pagan, Jewish, Gnostic and even Christian perspective. Since it is hard to characterize a criticism of a biblical passage or of a Christian doctrine as Porphyrian, an alternate model of edition would be to collect all objections, with or without a specific reference to an opponent to Christianity. Rinaldi [6] and Cook [7] have published such collections, which were, however, restricted to Biblical verses.

The commentary is always very erudite and well informed about the whole history of the research, but since it is structured as footnotes attached to a single sentence, it may sometimes miss the most important points. For instance, there is a long commentary on the longest fragment (fr. 6) on Origen, taken from Eusebius' Ecclesiastical History, VI 19, 1-11. A long note (153, n. 18) explains that Porphyry has in view Origen the Christian and not the pagan homonymous Platonist - an undisputable fact -, but there is no examination of several inconsistencies in Porphyry's fragment, according to which Origen was originally a pagan, a disciple of Ammonius (like the other Origen), who then converted to Christianity, and, according to Eusebius's understanding of Porphyry, was honoured by pagan philosophers who dedicated their treatises to him: the hypothesis of a possible confusion with the pagan homonymous philosopher is alluded to (156, n. 35), but left undiscussed in a very unpolemical way along the mention of the scholars opposed to such a view.

On a more formal level, a criticism that could be made not of the author, but of the publisher who sells at high price books with very little additional typographical enrichment, is that for each fragment there is a very impractical sequence of text, translation and notes. Instead, de Gruyter should have printed on opposite pages the original text and its German translation, followed by the commentary, perhaps in smaller characters. Since the source reference for each fragment is repeated in front of each note, it is rather difficult to keep each part of the relevant fragment in view.

The methodological choices made by Becker for his edition aimed at providing a well-founded collection of texts, while avoiding a too minimalistic approach. That some interesting anonymous texts are printed in the commentary instead of being numbered as fragments may not be a great loss. At any rate, Macarius' pagan objections should be read as part of the debate with the Christian opponent in the Apocriticus. Sorting fragments according to their genuineness rather than their content is also a decision that can be well justified. The overall result is convincing, and this edition should be considered as the most complete and most useful since Harnack.

[7] J.G. Cook: The Interpretation of the Old Testament in Greco-Roman Paganism, Tübingen 2004; Id.: The Interpretation of the New Testament in Greco-Roman Paganism, Tübingen 2000. For a general survey of recent studies on that line of research, see Id.: "Research on the Bible among the Pagans since Rinaldi's Biblia Gentium", Henoch 37 (2015), 167-190.