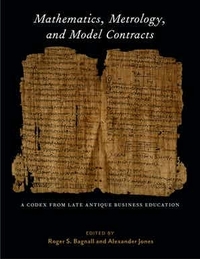 'Greetings. I acknowledge that I have received . . . one well-stamped, two-imaged solidus of gold'. This is what survives at what is now the top of the first (incomplete) text - describing the loan of a valuable coin - in this important edition of the fourth century CE papyrus codex referred to as P.Math. (62-63). The twelve leaves of the (reconstructed) codex contain many mathematical problems, several contracts and a number of texts listing various units of measure and their equivalents. [1]

The edition, with critical apparatus, English translation and a rich problem-by-problem commentary addressing papyrological, philological, mathematical and contextual matters, is the work of Roger Bagnall and Alexander Jones, with the assistance of Katja Kosova and Zoe Misiewicz, and contributions from Jonathan Ben-Dov, Jacco Dieleman, Justin Dombrowski, Erik Hermans and Mathieu Ossendrijver. Following their consideration of the contents and the format of the codex, and the quality of the Greek, Bagnall and Jones argue that it is likely to have 'belonged to a student in a school devoted to training business agents and similar professionals' (55).

The extensive introduction discusses the types of text in P.Math. and their relation to comparable texts in other Greco-Roman papyri and archaeologically-recovered media. The texts are placed within the larger context of the late antique world, particularly with regards to issues relating to numeracy, literacy, education and vocational training.

The metrological texts detail how various units of measure were related, facilitating the unit conversions required in many mathematical problems. Some describe relations between units of the same kind, for example length, while others refer to units of measure describing different sorts of commodities, such as dry goods or liquids. Area measures relating to building sites and the work of surveyors are referred to as well. For example, the relationship between the surveyor's schoinion and the cubit is given in text e3 (80-81).

The forty-four mathematical problems in P.Math. are the most varied collection known (even though P.Cair. cat. 10758 contains more problems). The majority in P.Math. are concerned with two- and three-dimensional geometry. In several instances, the specified subject of consideration is a possible 'real-world' situation - such as how many vines a field will hold (f7, 86-87) - rather than a mathematical object such as a triangle. A number of problems refer to wheat and granaries, whilst one outlier is concerned with the speed of people running (d2, 74-75). There are also six problems dealing with partition into unit fractions, presenting puzzles without reference to specific practical applications. The editors consider ways in which the problem texts might have been used within an educational setting. Notably, they see little evidence of progression from elementary to more advanced problems (21) and the intention behind the order of presentation of the problems is not clear. The arithmetical skills of the codex' compiler were very good. There appear to be no errors of calculation (25).

Diagrams are famously important to Greek geometry. In mathematical papyri, diagrams may aid in the visualisation of the situation described. The editors point to numerous issues with the diagrams in P.Math., suggesting that the creator of the diagrams 'must have had only a tenuous grasp of the spatial meaning of the geometrical terms in the problems' (27). They note that 'each recto or verso contains one or more texts, usually separated by decorative borders or by the diagrams that come at the end of many mathematical problems' (3). Are the various diagrams, the representations of the ankh, palm fronds and borders 'simply' decorative? [2] Is P.Math. some sort of notebook? Are the 'decorations' part of the way in which the owner put their personal mark on the codex?

The provenance, codicology and philology of P.Math. are discussed in detail. Colour photographs of the individual leaves are reproduced at the back of the volume. An index to the Greek texts is provided. The editors recognise that some readers will be interested in the content of the texts, without being familiar with papyrology. Furthermore, some papyrologists may have limited knowledge of mathematical texts. All will benefit from the appendices, which provide a synopsis of problem texts in mathematical papyri and a bibliographic concordance of mathematical and metrological papyri.

The purpose for which the codex was originally produced is difficult to judge, and it is equally difficult to know what sort of person would have been responsible for it. At one point, the editors suggest that the mathematical problems here (as in some other Greek mathematical papyri) appear to be material belonging to a teacher (23). Some of the problems have a question-and-answer format suggestive of an educational setting. Bagnall and Jones explain that as they worked on the codex, they came to believe that it originally belonged to a student in a fourth-century business vocational school (54-55).

The palaeography does not suggest a professional scribe and even though there are variations in the handwriting, the editors regard the codex as a single palaeographical unit, with the writer adopting a different style at certain places. The editors found the Greek 'far from flawless' (9). Portions of the text may have been copied (with copying errors in evidence) and other parts written following dictation or listening during a lesson.

Bagnall and Jones identify the contract texts in P.Math. as models, rather than contracts that were actually executed, on several grounds. Executed contracts would have been produced on separate papyrus sheets, rather than as portions of a codex. Furthermore, those here lack the concluding elements that would have been required in actual contractual documents. The examples in P.Math. may be representative of model contracts used within a professional training context.

This attractively produced volume will engage papyrologists as well as scholars interested in various aspects of the history and culture of late antiquity, including education, literacy, numeracy, the economy, and mathematics. Bagnall is the Director Emeritus and Jones the current Director of the Institute for the Study of the Ancient World (ISAW) at New York University (NYU). They explain that work on this volume, published by New York University Press, began during a graduate seminar at ISAW in 2010. Begun in the context of graduate training, Bagnall and Jones and their team have produced an impressive work, that will be a valuable resource and reference for future research.

[1] The pieces of papyrus that comprise P.Math. are currently held in two different collections, that of the anonymous owner of the 'Archimedes Palimpsest' and the Cotsen Children's Library of Princeton University (1-3). The editors suggest other possible reconstructions (7).