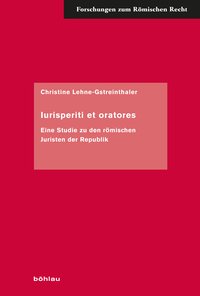 This important and timely monograph is broadly concerned with the Roman jurists of the Republic. It traces the origin of the Roman juristic profession from the fifth century BCE to the end of Republic and the transition to the Empire. The origin of the Roman juristic profession is a vexed one with much uncertainty owing to the paucity of the available source material. Nevertheless, the rise of the profession and the changes which occurred within it during the Republic are seminal to the understanding of the shape and contours of the juristic profession of the Empire. As Lehne-Gstreinthaler (12) points out, it is precisely because the Republic is a period of change and transition, that it is deserving of renewed scholarly attention. In order to frame the research question adequately, it is important to define the central object of this study, "the jurist" in a sensitive and nuanced manner. In my view, the author has wisely settled on a rather broader definition of the term than is ordinarily found in works of the jurists of later periods in Roman legal history (see 12-13). This has allowed her to present a broader and more nuanced picture of the origins of the profession and its growth in relation to other areas of Roman public life. This choice also meant that the end result is not necessarily a new prosopography of Republican jurists, but rather a very readable and informative contextualisation of the topic.

The book is broadly divided into two sections with a number of smaller chapters contained in each section. Section 1 of the book is entitled "the jurists of the Roman Republic". It is subdivided into 5 chapters starting from the earliest period - the precursors of the jurists in the pontifices - and moving chronologically through various important epochs through to the end of the Roman Republic in the first century BCE. Here, two chapters are specifically worth reading, namely the move towards "secularisation" in the third century BCE in chapter I.3, as well as the end of the Republic and the transition to the Principate (I.5). The five chapters framing this section contain a wealth of insights. Thus, for example, in the section on the origins of the profession, the role of the priestly colleges and their keeping of archives is fascinating. In addition, the discussion of the textual complexities of Pomponius' Enchiridion, our main source of information regarding the rise of the Roman jurists, is worthy of mention. Finally, the separation between the juristic profession and the broader political sphere in the second century BCE is quite engaging.

The second section of the book is devoted to what the author describes as a "Berufsbild". In this section, she investigates a number of things including patronage, the main activities of the jurists, their areas of practice, and social class. As this section clearly shows, one cannot really separate a study of the rise of the Roman juristic profession from their context. In my view, this is a particularly successful part of the overall monograph.

In conclusion, this is a particularly successful monograph. It is engaging and the scholarship is of international quality and rigour. The author has an engaging style of prose which makes this book a joy to read. In addition, the volume has been produced with great care and attention. In my view, this work is an important new contribution to an ongoing debate concerning the origins of the Roman juristic profession. I have no doubt that it will become an important point of reference in this debate in the future.