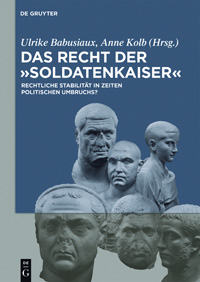 This interesting volume of proceedings is the result of a conference organised in Zurich in 2013 by the two editors. The aim of the conference, and thus also of the volume, was to create greater dialogue between scholars of ancient history and of legal history about the vexed question of the so-called "crisis of the third century".

The volume is divided into an introduction (together with a survey of literature and certain general conclusions) followed by three roughly equal sections in which individual scholars address larger issues. The first section (Grundlagen und Entwicklungen) contains contributions by such luminaries as Boudewijn Sirks and Pierangelo Buongiorno to name but a few. As far as a theme may be identified for this section, the reader would be well advised to start with the astute observations by Michael Sommer who, after surveying all the major literary contributions on the theme of "crisis" from Gibbon to the modern day, argues that a new narrative is required to deal with the theme of "crisis". The remaining authors in this section, taking their cue from Sommer, address more specific issues such as the legal productivity of specific emperors (Sirks) and the relationship between soldiers and their emperor as visible in legal and epigraphic sources (Speidel).

The second section (Gesetzgebung und Rechtsprechung) contains a veritable who's who of scholars working on later classical Roman law, such as Detlef Liebs, Iole Fargnoli and Bernhard Palme. This section, the heart of the volume, is worth reading on its own as it contains a veritable wealth of information on late classical Roman law. Given the richness of this section, it is hard to single particular authors out. Nonetheless, the reader may be well advised to reflect carefully on the insights of Atzeri about infamia as punishment as well as on the ideas of Palme about the administrative restructuring of the taxation system in Roman Egypt during the reign of the Emperor Philip the Arab. This chapter also makes some interesting observations about continuity that may be traced back to the Severan Emperors and to the effect of the Constitutio Antoniniana.

The final section (Zur Rolle der Jurisprudenz) contains chapters by Michael Peachin, Lukas de Blois and the first editor herself. All three deserve mention. Peachin, building on the work of Honoré, argues in favour of a reassessment of the importance and function of the jurists in Imperial law making processes while De Blois reaches absorbing conclusions concerning the decline of juristic influence upon the Imperial court post 241 AD. Finally, Babusiaux investigates citations to classical jurists found in Imperial rescripts and draws a number of important conclusions about their presence as well as absence.

So what shall one make of all of this? First, volumes such as these demonstrate the importance of interdisciplinary studies for the future of legal history. The so-called "crisis of the third century" is not merely a legal phenomenon. It has implications for all aspects of study of the third century. Anyone considering this period, therefore, has to take account, not just of the law, but also of the larger cultural forces at work. In second place, this volume clearly demonstrates the importance of questioning fundamental truths in the narrative of the history of Roman law. History is never static. It changes as perspectives change and when new discoveries come to light. We owe it to ourselves as legal historians also to be sensitive to new insights and interpretations, especially when those come from other disciplines such as ancient history. Finally, this volume makes a significant contribution to the issue of "legal change". Law may not be a mirror of society, but it is certainly linked to it in some way. That each author individually comes to the conclusion that there is more "continuity" than "crisis" is crucial. It demonstrates how much more work is required about legal change in the late classical period of Roman law.

I could end this review with a pithy quotation about "crisis", but I will refrain from doing so. Rather, I will end it by congratulating the editors for undertaking such an important task and for producing such an excellent volume. It will undoubtedly play a significant role in constructing the new narrative of the late classical period. Crisis? What crisis?