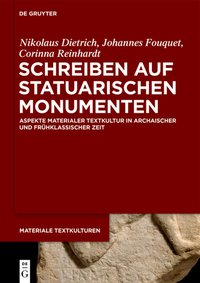 As a genre, inscribed statue bases are seldom subjected to critical approaches analogous to those for the statues they supported and the texts inscribed upon them. The styles of Greek statues have been intensively studied, but far less so the stylistic presentation of their bases. This new book in de Gruyter's Materiale Textkulturen series addresses this gap in art historical/archaeological scholarship.

It consists of three separate studies written individually by three collaborators, bracketed by Nikolaus Dietrich's introduction and a jointly-written concluding chapter. The introduction offers a critique of the modern historiography of Greek statue bases, emphasizing how even the best corpora devalue bases as artful objects in the interests of compiling and regularizing their inscribed texts. This is to be expected of Inscriptiones Graecae volumes published in the 19th and early 20th centuries. It is more surprising that, even in the age of photographic reproduction, there has been so little impetus to document inscribed bases fully within the context of studying Greek sculpture.

In the case of Archaic Attic funerary monuments, we have thorough archaeological and epigraphical corpora, but there is room for further reflection on the principles of composition, production, and presentation. This is precisely what the revelatory first chapter by Corinna Reinhardt offers. Going a step beyond taxonomy based upon named sculptors, epigraphic hands, and workshops, Reinhardt conducts a systematic search for patterns in inscription placement on the approximately 70 extant bases for funerary statues and stelai from Archaic Attica. The most noteworthy, and perhaps counterintuitive, finding is the lack of meaningful connections between inscriptions and the human figures represented as statues in the round or in relief. The epitaph, the inscription naming the sculptor, and the representation of the deceased were conceived of as independent decorative elements. Inscriptions emphasized the complex architecture of grave monuments and drew attention to the materiality of their elements. They elucidated the entire monument as sema, not the sculpted figure embodying the deceased.

Like Greek statues, some statue bases had recognizable styles. In the second chapter, Johannes Fouquet offers a brief case study focused on one such style found on some Athenian monuments of the late Archaic and early Classical periods. Several of these were private dedications made by Athenians of the highest social class. The bases consist of rectangular blocks, round columns, or pillars whose inscribed faces feature a smoothed margin (Randschlag und Spiegel) surrounding, or surrounded by, a stippled surface treatment. The overall effect resembles architectural anathyrosis. The ample illustrations in this chapter will help readers unfamiliar with the material to understand what makes this effect so distinctive and aesthetically appealing.

The author of this review in an earlier publication [1] dubbed this distinctive surface treatment the "architectural style" and emphasized its use on public monuments commemorating the Athenian victories in the Persian Wars. Fouquet prefers the term "dekorative Unfertigkeit" (decorative incompletion). Dissociating a series of statue bases from questions about sculptors, workshops, and patronage, as Fouquet does, leaves open the question of who designed statue bases (sculptors or specialist masons?), and why particular formats and styles were chosen in the first place.

The third chapter by Dietrich is a wide-ranging attempt to explain the principles guiding the layout of statuary texts in Archaic and early Classical Greek art. It begins with Nikandre's kore from Delos (Athens NM 1) as an example of an inscription carved on the body of the statue itself. The most important insight here is that inscribed text was generally conceived in terms of decorative strings or strips (Streifen) of letters used to cover blank surfaces, in much the same way as decorative moldings in architecture or human figures in a sculptural relief. By this logic, the stoichedon style of lettering, in which a vertical and horizontal letter grid covers the entire inscribed surface of the stone, represents a natural outcome of Archaic Athenian approaches to layout (167-171). This judgment echoes the words of R. P. Austin, who in 1938 called the Attic stoichedon style "a natural development in the hands of competent and progressive engravers". [2]

More attention to how Archaic letter cutters approached their task, however, casts some doubt upon this conclusion. Dietrich correctly notes that Archaic and fifth-century statue base inscriptions show a surprising lack of advance planning (184-187). I would add that often the placement of the letters in the first line of inscribed text was used as a reference point for laying out the second line, and the second line for the third line, and so on. This sort of approach produced not only the stoichedon style, but also other layouts in which vertical alignments of letters in succeeding lines were purposely avoided: the most extreme example is the Marathon casualty list found at Eua-Loukou in the Peloponnese in 2000 (SEG LVI 430).

Readers who know little about statue bases may have trouble finding what they are looking for in this book. Thankfully, some familiar examples, such as Phrasikleia's grave monument from Merenda in Attica, serve as touchstones revisited across the chapters. Reinhardt (74-76) discusses the evidence for incised and red-painted borders framing Phrasikleia's inscribed epitaph (IG I3 1261) - an unusual graphic device that is quite literally eye-catching. Modern painted reconstructions of the Phrasikleia statue and its base, such as the one illustrated in Abb. 1.22, uniformly omit this detail. Fouquet's claim, however, that the Phrasikleia base is a "forerunner" of dekorative Unfertigkeit seems unwarranted (126-131).

This volume sets a good example in several respects: it is available both as a print book and in open access; the illustrations are abundant; the copious bibliographic references have been carefully compiled and appear to be free of errors. As the authors themselves say, the essays in this book are not intended to be definitive, but rather a starting point for further inquiry into the material aspects of sculptural inscriptions of all periods. This inquiry into some examples from the Archaic period and the fifth century just scratches the surface (pun intended).