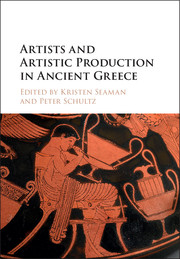 To judge from this volume and other publications of recent years - in particular the multi-volume reference works Künsterlexikon der Antike and Der Neue Overbeck (DNO) - artists are back on the agenda in the study of Greek art. The eleven essays here address the role of artists in a range of artistic media: vase painting, sculpture, mosaics, and coins. Media not touched upon include monumental wall painting, metalwork, minor arts, and letter cutting.

Kristen Seaman's introduction and her essay on "The Background of Elite Greek Artists" urge us to give renewed attention to literary texts and inscriptions of various genres that might help us to recover the "self-aware and socially recognized authorship of ... technitai" (5). Trendy discussion of artists' "agency" is largely avoided; indeed, the volume concludes with a trenchant critique by Jeffrey Hurwit of Alfred Gell's influential book on art and agency as "posthumous, provocative, but nearly unreadable" (191).

Jenifer Neils' "Portrait of an Artist: Euthymides, son of Pollias" belongs to a sub-genre of Greek art scholarship that lives on despite its detractors: the study of an Athenian red-figure vase painter identified by hand-attribution and named by signatures on vases. Neils situates Euthymides and other red-figure Pioneers in an aristocratic milieu in late Archaic Athens on the basis of vase dipinti such as the famous "as never Euphronios" on an amphora in Munich. Though Neils does not say so, the names Euthymides and Pollias were both uncommon in sixth- and fifth-century Athens, which makes it likely that any vase dipinto or inscription on stone with their names really does refer to the vase painter and his father, a sculptor who signed his works on the Athenian Acropolis. On the other hand, Sarah Bolmarcich and Georgina Muskett, in their synthetic study of "Artists' Signatures on Archaic Greek Vases from Athens" later in the volume, entertain the possibility that the Euphronios and Smikros named in dipinti on scenes of aristocratic life were simply not the same people as the red-figure Pioneers of those names.

The essays by Andrew Stewart, Olga Palagia, and Peter Schultz can be read most profitably as parerga to their earlier publications on Classical sculptors. Stewart begins with the provocative claim that the Athenians Kritios and Nesiotes were the first Greek sculptors "to emerge as artistic personalities in their own right" (37), and that they should in fact be considered the lost protoi heuretai of the Classical style. Though several of their signed statue bases survive, what seems curious (at least to me) about Kritios and Nesiotes is the complete absence of anecdote about them in literary sources - contrast other Classical sculptors (Polykleitos, Praxiteles) for whom anecdote outweighs documentary evidence.

Palagia returns to Euphranor, the subject of her 1980 book, a Classical sculptor with no extant signatures. Perhaps the most noteworthy thing to emerge from this essay (131-133) is that Palagia's reconstruction of Euphranor's œuvre differs in almost every particular from that of George Dontas: whereas Palagia attributes the Piraeus Athena to Euphranor, Dontas used the large Artemis from the Piraeus bronze cache as a basis for reconstructing his style.

Schultz's contribution broaches an important question: is it possible to infer the political stance of a Greek sculptor from the documentary evidence available? Schultz reaffirms the identification of the Athenian Praxiteles and his son, Kephisodotos, as liturgists, and therefore from the highest stratum of fourth-century Athenian society. Kephisodotos continued to work after the Macedonian occupation of Athens, but his patrons include leading opponents of Macedonian rule. Does this mean that Kephisodotos himself was an anti-Macedonian patriot? It is surprising here to find no reference either to Francis Croissant's discussion of the career of another fourth-century Athenian sculptor, Praxias [1], or to the problem of reconstructing the politics of Archaic sculptors such as Endoios and Antenor from their patrons and commissions.

The strongest essays here push back against specific modern constructs of the ancient Greek artist. Margaret Miles critiques the faulty assumptions and circular reasoning that led W. B. Dinsmoor Sr. to attribute four fifth-century Doric peripteral temples in Athens and Attica (the Hephaisteion, the temples at Sounion and Rhamnous, and the temple of Ares moved to the Athenian Agora in the Augustan period) to the so-called "Theseum Architect". Miles begins with a good summary of the documentary evidence for named Greek architects in antiquity, and concludes that attributing temple buildings to architects in the absence of such evidence is a fool's errand.

Coins and mosaics seem like unusual art forms to include in a volume focused on the Archaic and Classical periods, but the essays on them are creative and appealing. Isabelle Pafford offers a meditation on the framing of the images on Archaic and Classical coins as a realm for artistic choice in a medium that was otherwise conservative. Rebecca Martin questions the classification of Hellenistic picture mosaics in the eastern Mediterranean, a craft genre in which signatures were uncommon, as Greek.

It is fitting that the book closes with a "Response" by Jeffrey Hurwit since it often reads like both a Festschrift for Hurwit and a companion volume to his recent book on signatures in Greek art. For Hurwit, as for the other authors here, Greek artists were "self-consciously agonistic and progressive" (197). Some artists were clearly more important than others, both to their contemporaries and to Greco-Roman posterity.

With its focus almost exclusively on the Archaic and Classical periods, what this book does not give us is a sense of the very real differences between Hellenistic Greek artists and earlier ones. Hellenistic sculptors such as Damophon of Messene and Telesinos fit seamlessly into the matrix of high-status Greek society, as evidenced by their euergetism and their awards of civic honorific portraits. Can the same be said of Kritios and Nesiotes, or even of Praxiteles and Kephisodotos?