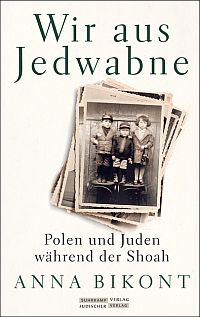 "Wir aus Jedwabne," first published in Polish in 2004, is one of the key publications to emerge from the public debate following Jan T. Gross's "Neighbours: The Destruction of the Jewish community in Jedwabne" [1]. The case of Polish inhabitants of the town of Jedwabne, who on 10 July 1941 burned their Jewish neighbours alive, became a starting point for one of the key post-1989 public debates on crimes committed against Jews by Poles during World War II. The discussion led to a number of scholarly publications, most notably a two-volume report published by the Institute of National Remembrance [2]. Bikont's book, rather than an academic study, is an extremely captivating and sensitive journalistic look into what was very much a communal crime, a study into victims, perpetrators and those who Elżbieta Janicka branded as participating observers [3].

"Wir aus Jedwabne" is divided into two parts. Firstly, it is a study of the murder itself. It's a step-by-step reconstruction of both the pogrom carried out in Jedwabne and massacres in neighbouring Wąsocz and Radziłów, retold by Polish and Jewish inhabitants of the villages. This story is intertwined with Bikont's 2000-2004 diary documenting her return to Jedwabne to investigate a crime, which at the time of writing took place exactly 60 years earlier. One of the protagonists warns her at the beginning of the book to "Stop scratching the wounds" (29), and it soon becomes clear that the wounds have never been healed. They overshadow the lives of both perpetrators and victims, those still living in Jedwabne and those traced by Bikont to Israel, America, England and elsewhere in Poland, as well as the lives of the majority of town inhabitants, who only moved there many years after the war. All of them have to deal with the shadow of the past crime while finding themselves in the middle of a media storm caused by the upcoming unveiling of a new memorial on the site of the barn where Jewish inhabitants of the town were burned. While writing the book, Bikont turns from an outsider, a well-known journalist coming to a small town to investigate a story, into one of the key players in the media debate.

The key theme running through the book is undoubtedly that of immense fear, hidden under the term "things not spoken of". The July 1941 murder is not spoken of in Jedwabne, but neither is one's Jewishness or even involvement in hiding Jews. They become what Christopher Browning termed "communal memories", which on the basis of tacit consensus remain hidden from outsiders [4]. Only outbursts of truth during fights or drunken brawls show that, despite 60 years having passed, nothing has been forgotten.

While "Wir aus Jedwabne" seemingly speaks mainly of the killers' fear of being exposed and unwillingness to admit their crimes ("It's easier to get the names of killers", writes Bikont at one point (419)), this is clearly not its aim. Jedwabne, as a space suspended between the present and the past, is shared by the living, and the dead. In one of the scenes, a former Jewish inhabitant of Jedwabne shows Bikont a photograph of children from his school year, narrating: "First row from the right: burned, burned, burned. This is Jospa Lewin, Józef Lewin's sister, who just after the German's arrival was tortured by Poles in the marketplace, she was burned with the others. In the second row, Motłe Farberowicz, second from the right, before the war emigrated to South America. And the others: killed, killed, killed..." (323). Bringing those names to light clearly seems to be one of Bikont's main aims. At points, surrounded by a community bent on forgetting, she seems completely alone in her fight, accompanied in her struggle by the shadows of the dead, rather than those still alive. At points, she is fighting against victims themselves, those few who chose to carry on living in Jedwabne. Thus the book becomes increasingly about Bikont's own fear of abandoning the murdered people and of letting their memory disperse.

As already noted, "Wir aus Jedwabne" is not an academic historical study. Focusing on communal dynamics, Bikont downplays the input of the German Security Police and the Security Service operating in the area. There are also methodological issues when it comes to the analysis of sources utilised, in particular documents from the post-war investigations. Yet those interested in a scholarly discussion of what happened in Jedwabne now have at their disposal an ample number of studies. Bikont's book undoubtedly is a unique study of Polish, both Jewish and non-Jewish, communal memory of the Holocaust. It is a necessary read if we are to understand Poland and its struggle to come to terms with participation in crimes committed against its Jewish citizens.