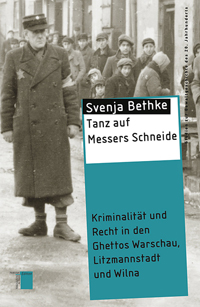 Svenja Bethke's very aptly titled Tanz auf Messers Schneide [Dance on the Knife's Edge] is an illuminating study of Jewish "crime" and methods of its punishment in the ghettos of Warsaw (in the Generalgouvernement), Litzmannstadt (in Wartheland) and Wilna (in Reichskommissariat Ostland). The archival base of the book is very impressive and ranges from German court documentation, through documents of ghetto officials to personal testimony. The author extracts from it a fascinating picture of the official and un-official concept of law and attempts at its implementation following the "rupture" in social normality caused by the creation of ghettos. Combining thorough archival research with careful and sensitive analysis of everyday life and the evolution of social norms within the ghetto walls, the book forms an important addition to the scholarship of the topic.

There are two main themes, which arise from Bethke's book. The first one is the interplay between the internal need to keep social order within the ghetto walls and German-enforced concept of Jewish criminality. Here the book excels in discussing the difficult role and dilemma of members of the Judenräte, who were forced with implementing German policies. As Bethke shows, their situation was complicated by a lack of clarity regarding German plans and the fact that "crimes" which had to be punished on orders from the Germans (such as "illegal border crossing" or avoiding forced labor conscription) negatively affected the dynamic between the enforced ghetto community and various organs of the Jewish law enforcement. Simultaneously, Bethke underlines the degree of flexibility possessed by the Judenräte, whether negotiated or permitted through a temporary lack of interest in the internal affairs of the ghetto, in terms of handling of misdemeanors committed in the ghetto and the definition of law. An example of this could be the arbitrary practices of the ghetto police or legislations of often improvised "ghetto courts" which, with a certain degree of autonomy, were allowed to rule on transgressions committed within the ghetto walls.

Here the second point of focus emerges as Bethke traces the creation of "new norms" in the ghetto society, ones adjusted to the wartime reality and living conditions of ghetto prisoners. As the book shows, the legal standards enforced by ghettos' internal legal bodies had to consider the extreme living conditions of those who were convicted. While the Polish pre-war law was the point of authority to begin with, it soon became clear that what formed a moral transgression before the war should not be considered as such in a society plagued with starvation and extreme poverty, where the fight for survival was simply part of everyday life.

As already mentioned, the particular strength of the book lies in the choice of case studies; three ghettos set up in different circumstances, with different relations between the leadership and the ghetto society. Perhaps most important was the different relations with the German authorities and varying knowledge about the Germans plans related to the ghetto future. As Bethke demonstrates, the circumstances in each ghetto deeply affected legal standards of the Judenräte, which included not only the perception of "new" wartime crimes but also of those actions which were considered criminal from before the war, such as murder or rape.

Such a pioneering approach is without doubt extremely beneficial for our understanding of this topic. However, despite a wide range of sources and very thorough analysis, scarcity and uneven distribution of archival documents means that not all topics can be fully compared. While Litzmannstadt ghetto is amply documented regarding law enforcement, the archival sources dealing with Warsaw and Vilna are much patchier. While they are sufficient on some specific topics they are scarce on others. It has to be underlined that the author makes the most of available documents, still in some sections (for example dealing with the internal ghetto courts) the uneven quantity of sources is clearly noticeable. Yet the very fact that the author undertakes to look at the ghettos from a comparative perspective, one that is still clearly lacking in scholarship, makes for a very interesting read and a valuable addition to research on the topic. One hopes that this important book will pave the way for further publications, which will hopefully extend to smaller, less known communities and allow us to address broader questions about crime and justice in extreme circumstances. Bethke's book is a significant and ambitious first step on this path.