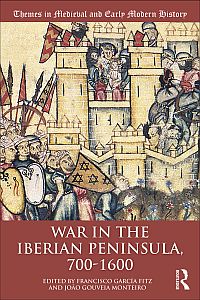 Iberian Medieval History would be impossible to understand without the study of war, one of the factors that shaped peninsular societies. And the Spanish-Portuguese historiography of the last twenty-five years would be equally incomplete without the work of the two editors of this book. Speaking of war and Medieval History in Portugal and Spain is to do so of João Gouveia Monteiro and Francisco García Fitz, which gives us a first reason (among many) why War in the Iberian Peninsula constitutes an essential book. Even though there were pioneers in the field, in each country, both historians are largely responsible for the renewal of these studies through numerous works, which have led to a qualitative change in methodologies, approaches and exhaustiveness in the treatment of sources. Their mark and mastery, in this case, is even more significant, because their efforts as concerned editors have conferred coherence and accuracy to all the chapters that compose this book.

To start with, they offer us a complete overview of the historiography devoted to the military history of the peninsular Middle Ages, which provides an excellent and necessary initial bibliographical survey (XV-XVII). This preamble highlights the methodological renewal, the breadth of the subjects covered and the growth of studies related to medieval armies and warfare that have been produced in the two countries in the last three decades. Then, the book is divided into six chapters, corresponding to the major political units of the peninsular space. Javier Albarrán devotes two parts to the military history of al-Andalus, from the conquest to the emirate of Granada (1-53). The third chapter deals with the history of Castile and León and is written by Francisco García Fitz himself, Carlos de Ayala, Martín Alvira and Fernando Arias, the latter focusing specifically on the last two centuries of the Spanish Middle Ages (54-123). Armies and wars related to the crown of Aragon (124-174) and the kingdom of Navarre (175-200), throughout the whole of their medieval history, are studied by Mario Lafuente and Jon Andoni Fernández de Larrea in chapters 4 and 5, respectively. And then the war history of Portugal is also examined by various specialists, devoted to three successive periods: José Varandas for the Early and High Middle Ages (201-212), Miguel Gomes Martins and João Gouveia Monteiro focus on the Late Middle Ages (212-241), while Luís Costa e Sousa and Vítor Luís Gaspar Rodrigues are responsible for the Portuguese wars by land and sea during the 16th century (241-266). A seventh chapter, written by Antonio J. Rodríguez, is dedicated to the conflicts fought by the Spanish Monarchy during the 16th century in North Africa, continental Europe, the Mediterranean and at sea with England (267-299).

The text ends with a series of conclusions in which the editors highlight some key aspects of the book as a whole (300-303). On the one hand, on the development and renovation undergone by the peninsular historiography on medieval warfare. On the other hand, on the role of war as a core factor in the political and territorial formation of the Iberian Peninsula, with special emphasis on the Christian world and its so-called 'societies organised by and for war'. And, finally, with regard to the capacity of the military realities to shape the institutions, societies and economies of the peninsular kingdoms until the end of the Middle Ages and the beginning of the Modern Age. These changes led to the formation of 'modern states', which also founded their power on the ability to export and reproduce forms of violence that had been practised for generations on the peninsular soil.

The different hands, perspectives and study subjects, as well as the required diachronic approach of the different chapters, do not, however, offer an unequal result in terms of the issues dealt with or the depth and quality of the contributions. On the contrary, they all adhere to a repeated and effective scheme, which begins with a brief political and military overview of the period, dispensable for the reader more acquainted with peninsular history, but necessary for the rest. This is followed by an examination of the component parts of the armies, the various military obligations of the subjects and vassals, their forms of recruitment, the different units that made them up (including fortress garrisons) and also their chains of command. Of course, in all the chapters there are also room for the discussion about the ways of waging war, the strategies and the tactics deployed against the enemy, with special attention to three types of military operations: attrition warfare, siege warfare and pitched battles. There are sections on logistics, supplies and funding, focused on the organisational and fiscal resources brought into play for the development of the war; or on armament, fortifications and naval warfare, which in addition offer a very interesting perspective on the evolution of the technology of warfare. A special place is devoted to the study of the ideology of war, aimed at justifying and legitimising confrontation through ideological discourses such as the 'reconquest' or the 'jihad'. In all cases, the chapters end with a selection of the more representative campaigns, which are examples of the forms of warfare at different times and places. Moreover, all of them conclude with a concise bibliography and are illustrated with images and maps. In this respect, more homogeneity would have been desirable, since maps are abundant in some texts but are missing in others.

The strict adherence to this outline followed by the authors does not, however, prevent the relationship between one chapter and another from being abundant. In short, these are not sections conceived as watertight compartments or individual pieces disconnected from the work as a whole, but contributions that refer to each other and establish a dialogue. They also generate a useful glossary of well explained terms at the end (304-312) as well as an equally helpful index of terms, people and places (313-330); and, in sum, they make up an homogeneous ensemble of great value for understanding the history of war in Spain and Portugal during the Middle Ages.

The book shows the huge relationships and influences that established warfare methods in the Iberian Peninsula in the Middle Ages. The armies of the feudal counties and kingdoms fought against and beside the troops of different Islamic political entities over the centuries, but also against each other or in bloody civil wars. This volume, well thought out in its structure and executed by its authors, is also a testimony of hybridisations and influences in the military field between Christians and Muslims, which is an added value to the individual studies that comprise it. It is a work that also reveals continuities and transformations throughout the different periods up to the beginning of the 16th century, when the medieval legacy, in warfare methods, was still evident.

This ambitious and necessarily synthetic project has its Achilles' heel, precisely, where other readers will find its great strength: its ability to gather the entire Iberian military history. The panoramic approach undoubtedly requires leaving out some features (for example, those related to military training), but it does focus on the most representative or general aspects and institutions. The chronological framework chosen, between 700 and 1600, also excludes from the study some issues that could have been interesting to deal with (I am referring to the history of warfare in the Visigothic period, whose exclusion is perfectly understandable in editorial terms, but it is an absence that perhaps prevents a better understanding of how the Islamic conquest took place, starting from the previous situation of the army of the Goths). Nevertheless, it was well worth the effort to integrate in a single book the entire military history of the peninsula over almost eight hundred years, from all possible geographical and cultural perspectives. The task had not been undertaken so far, and the work, in conclusion, constitutes an excellent synthesis developed with clarity and efficiency, which also opens up to an international public not always familiar with historiography written in Portuguese or Spanish. Those absences perceived are merely signs of the richness of this history; proofs of the difficult work carried out by its editors to articulate the chapters of the book; and evidences of the fruitful path that research can still pursue in many possible directions, regarding the study of the war in the Iberian Peninsula.