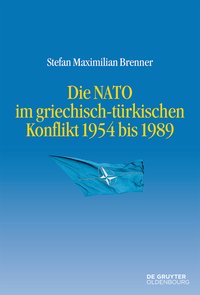 As NATO official documents have become increasingly available to historians during the last years, literature on the history of NATO in the Cold War has significantly expanded. A good number of books and articles on allied military strategy, politics, threat perception and intelligence assessments, burden-sharing, integration and solidarity, have been published. Furthermore, Cold War historiography in general has pushed forward to the 1970s and 1980s, exploring the rise and fall of the détente, the Euromissiles crisis and the so-called "Second Cold War".

Stefan Maximilian Brenner's research monograph Die NATO im griechisch-türkischen Konflikt 1954 bis 1989 is a significant contribution to this new historiography on NATO, going beyond the traditional fields of study. Its topic is an ongoing problem in NATO, the Greek-Turkish dispute. The relationship between the two partners was unproblematic only in the early stages of NATO but worsened in the mid-1950s on the occasion of the Cyprus crisis, an issue that remains unresolved today. Greek-Turkish tension rose in the mid-1960s. In 1974 bilateral relations deteriorated significantly due to the Turkish invasion in Cyprus and the spread of Greek-Turkish dispute in the Aegean Sea region: initially with regard to the issue of the delimitation of the Aegean Sea continental shelf, soon followed by Turkish statements and actions expressing Ankara's dissatisfaction with the status quo in the Aegean region, including, inter alia, the limit of Greek territorial waters and airspace, and operational air command and control responsibilities over the Aegean.

Brenner's research monograph has been based on his PhD thesis and is the product of extensive multi-archival research. He has made use of disparate archival sources, such as: the NATO Archives, the UK National Archives, the US National Archives and Records Administration as well as the Nixon, Ford and Reagan Presidential Libraries, plus German military and political archives. In addition, Brenner has fully utilized existing academic literature on issues relevant to his subject.

Brenner, and this is one of the strengths of the work, analyzes the problem throughout the whole period of the Cold War and thus allows the reader to understand the topic in the overall context. The events are periodised, but always considered and analytically linked with the overall effects on NATO and its reactions: since the mid-1950s the alliance has followed a policy of "equal distance" towards Greece and Turkey.

This book is structured thematically along nine chapters, including the introduction and the conclusion. The chapter on the beginnings of the conflict until 1959, a period in which the British played a crucial role as a colonial power in Cyprus, is then followed by a section on the second Cyprus conflict of 1963-1965. The reader realizes that the eager members of the southeast region, here especially Turkey, slowly became interest-oriented alliance partners, who paid more and more attention to their advantages. The culmination of the conflict came with the 1967 coup of the colonels in Greece, which brought an additional problem for NATO. In 1974 it was again Cyprus that gained decisive importance. The Turkish invasion of Cyprus in July 1974, which was anything but convincing militarily and was also closely watched on both sides of the Iron Curtain, led to the collapse of the Greek junta and the appointment of Konstantinos Karamanlis as prime minister. The latter left NATO's military command in August 1974, during the second Turkish offensive in Cyprus, because of the inactivity of the NATO partners. However, Athens soon found out that this exit backfired and had significant negative consequences. Neither the Ford and Carter administrations nor NATO applied pressure on Turkey to make concessions in Cyprus, while, as Greece was no longer in the club, it could not speak in important matters and was also in danger of losing material and diplomatic support. So, Greece joined again in 1980 after the Turks, who also had to agree, played on the Greeks re-entrance wish, blocked a return to the pre-1974 local command and control arrangements and gave their consent only when a compromise formula had been devised: the "Rogers Plan", envisaging Greece's return to NATO's military structures, but deferring the question of command and control over the Aegean Sea for the future. Today, the conflict is still not settled in principle, even though until recently it was somehow slumbering. However, the big picture has not really changed, while NATO's approach has not substantially evolved either.

NATO had considerable difficulty in dealing with the tricky situation, in particular the fact that two Allies were at times on the verge of fighting each other. Brenner clearly points out that the consultations at NATO headquarters were characterized sometimes by heavy confrontations and blame games. Timid approaches to mediation failed. It remained to the Americans to contain the conflict through their position as hegemon and the main supplier of arms and money. From the mid-1970s the Federal Republic of Germany also helped by giving substantial economic and financial aid. Also, NATO served as an institutional framework and as a discussion forum, which was important. All this is of considerable significance to this day. Not the least because from the mid-1960s to the late 1970s, Turkey began intra-alliance sabre-rattling by threatening to approach Moscow, a situation which resembles recent developments. Then, however, Turkey never came near to leave - or disassociate itself from - NATO. The question still arises regarding the current course of Turkish foreign and security policy and the probable NATO response to it, given Turkey's engagement in Syria, cooperation with Putin's Russia, and threats recently issued to Cyprus, Greece, and even the EU.

Brenner's book is of particular importance not only because a research gap was closed here. Unlike the Warsaw Pact, NATO exists to this day and - despite all the strategic and political transformations since 1990 - operates more or less in the same manner as it did during the Cold War. The analysis of the events is fruitful as a historical-political background for orientation. For example, it is necessary to ask whether an US administration led by Donald Trump would have had a similarly moderating and thoroughgoing effect on the dispute as in the past, should the Turkish-Greek conflict re-emerge. Another interesting aspect is Greece's exit from, and re-entry in, NATO's military command in the 1970s. It poses a question whether any disassociation of a NATO member from the Atlantic community will, eventually, prove a temporary one, or not. One may wonder: "Do they all come back sooner or later?"

Overall, this is a major contribution to the bibliography of NATO and Greek-Turkish relations during the Cold War and fills a significant gap. This monograph constitutes the first comprehensive study of this subject - that is, NATO perceptions of, and attitude towards the Greek-Turkish dispute - during the whole 1954-1989 period. Obviously, as it covers a long period, it has not dealt with some issues in full detail. It is nevertheless a book of great value for German-speaking Cold War historians, military historians and experts, strategic and defense studies specialists, and scholars of the transatlantic alliance.