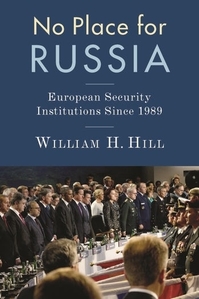 Three decades ago, Europeans, Americans, and Russians all hoped for a brighter future. Yet it all went sour quickly, darkening "the continent once again with division, mutual recriminations, and war," William H. Hill writes (2). In "No Place for Russia," he seeks to trace how this happened. However, his subtitle is more indicative of the book's broader scope: Hill chronicles how "European Security Institutions Since 1989" have been refurbished. In turn, Hill's conclusion is that, over the past three decades, the "greatest failing" of the West has been "the exclusion, isolation, and hostility" of Russia (387). His narrative is rich in detail and should convince even skeptics that the most important policymakers in the West never seriously considered integrating Russia within Western political, economic, and security structures. Nevertheless, the book also makes clear how little we know about why this is so: The rationales of the main actors remain opaque. Hence, armed solely with Hill's narrative, it is difficult to judge whether Russia's exclusion from the European order was really a "failing," or merely a price decision makers were willing to pay to achieve other priorities.

Hill draws upon a long career in US diplomacy, academia, and international organizations to offer an excellent primer for students of security policy. Relying primarily upon public pronouncements, journalistic accounts, analysts' assessments, and participants' memoirs, the volume includes a detailed review of transatlantic, intra-European, and Russia-oriented security developments. It is an excellent one-stop source for the diplomatic processes surrounding the North Atlantic Treaty Organization (NATO), the European Union's (EU) security efforts, and the Organization for Security and Co-operation in Europe (OSCE). In addition, the book offers interesting appraisals of developments on Russia's political scene and concise narratives of the most important events in Europe and the United States. NATO's expansion, the quagmires surrounding the Kosovo crisis, the implications of the 2001 terrorist attack on the United States and Washington's subsequent wars, the color revolutions and US efforts under President Barack Obama to reset the relationship with Moscow - these are just some of the highlights of the book's ten descriptive chapters.

This volume is most interesting when it analyzes Russian politics. As the Cold War ended, Russian elites hoped that European security affairs could be handled in a pan-European forum. However, the OSCE never met these expectations. Initially, some welcomed a continued - albeit limited - American presence in Europe, but as both NATO and the EU kept expanding eastwards, opposition grew. For more than a decade, embattled political leaders traded away Russian influence for a better relationship with the West - surmising that such accommodation would facilitate political action at home. The domestic beneficiaries of Russia's transformation welcomed the Kremlin's acquiescence to Western priorities. In contrast, bureaucratic elites did not appreciate Russia's loss of sway, nor did the broader population conclude that Western-inspired reforms were benefiting the average citizen. Thus, as soon as Russia became richer and more stable, albeit less democratic, its leaders decided that good relations with the West - and especially with the United States - were not worth their price. In contrast, relative hostility allowed the Kremlin to once again employ its economic and military instruments of power in order to enhance its influence in its immediate vicinity.

Hill also offers interesting analyses of the pressures behind German, British, and French actions. At the beginning of the 1990s, to assuage their neighbors' fears of a united Germany, leaders in Bonn sought to solidify European institutions. In turn, in order to counterbalance German economic power and achieve their own designs for Europe, the French were keen to expand their own role in the security sphere and to limit US influence. Atlanticist powers in Europe - and especially the United Kingdom - worked hard to help Washington oppose French designs. Ups and downs notwithstanding, the United States remained committed to a European role and, absent other openings, France slowly moved back towards the Alliance. Over time, Brussels institutions broadened and deepened, Berlin's role within Europe became more and more prominent, and Washington oriented itself increasingly towards Asia and other priorities. As a consequence, British policymakers came closer to their European - and especially French - colleagues, security seemed to play an increasingly smaller role in Europe, and transatlantic links became less binding. It was Russia's use of force in Ukraine that brought security concerns - and NATO - back to the forefront.

However, Hill's book reveals least about the rationales of the principal actor - the United States. Ever since the 1950s, American political elites understood "the importance of peace, security, and stability on the European continent for the United States' security and prosperity," Hill writes (30). While American citizens expected a "peace dividend" after the end of the Cold War, both Republicans and Democrats remained persuaded that their country had to retain global obligations. To this end, US policymakers wanted NATO to remain the "primary vehicle for continued American involvement in Europe" (60), and worked tirelessly to limit both Russian- and French-inspired alternatives. Nevertheless, if peace and democracy in Europe were really Washington's principal goals, it remains unclear why neither an arrangement involving Moscow nor a Paris- or Brussels-based design would have sufficed. At times, Hill suggests that US domestic political pressures or ideological extremes played a role in reinforcing Washington's commitment to remaining engaged in Europe, but neither of these factors appears powerful enough to have driven US policy.

This volume should be read by all students interested in further developing our understanding of security relations across the Atlantic and in Eurasia. Fittingly, Hill notes that "only by understanding the purposes, design, and growth of the European security order" can scholars "adequately understand not only how but why [the West] failed to integrate Russia" (3). He argues that neither Americans nor Western Europeans wanted to isolate Russia, but that key actors made choices for "specific reasons that made very good sense at the time," (10) but which had the "unintended effects" (2) that led to the current situation. In his four-hundred-page chronicle and the accompanying hundred-page notes, Hill has taken an important step towards elucidating how we got where we are. Others have their work cut out for them to improve our understanding of why we got here.