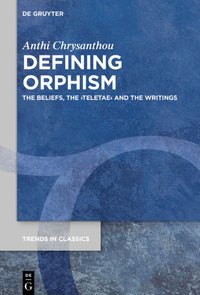 The new discoveries in the second half of the 20th century of the Derveni papyrus, the Olbia bone tablets, and several new gold lamellae made the majority of scholars, after decades of distrust in earlier reconstructions of Orphism, accept an inner consistence of Orphic writings, ideas and rituals. This conception is at the heart of Alberto Bernabé's Teubnerian edition of Orphicorum Fragmenta (2004-2007) and his many works on the subject. However, "Orpheoscepticism" has never surrendered: Radcliffe G. Edmonds published in 2013 Redefining Ancient Orphism, arguing for a much looser and fragmented vision of Orphic materials that denies a doctrinal core which would unify them. The two-centuries long Orphic debate has now produced two books springing respectively from doctoral thesis: Dwayne A. Meisner, Orphic Tradition and the Birth of the Gods, Oxford 2018, dwells on Orphic theogonic materials from a revisionist viewpoint, while Chrysanthou's book can be considered the latest offspring of the "Orpheophile" side (though she disagrees in several points with Bernabé's reconstructions). They are almost simultaneous, so they could not respond to each other. Such fecundity simply shows the vibrancy and complexity of the issues at stake.

One of the accomplishments of Chrysanthou's book is its simple but clear structure, since it treats separately each of the most important sets of evidence: 1) external references to Orphism; 2) the myth of Dionysos' dismemberment; 3) the gold tablets and the Olbia bones; 4) the papyri from Derveni and Gur&#244b; 5) the Hieroi Logoi in 24 Rhapsodies, a Hellenistic compilative theogony often quoted by Neoplatonist philosophers. Of course this clear-cut structure reveals some previous partis-pris: a sceptic would argue that the myth of the child Dionysus and the Titans does not deserve such a primordial position that allows interpreting everything else through its lenses; that the bone tablets from Olbia, with their striking mention of Orphikoi, have different functions and contents than the funerary gold ones, where there is no explicit mention of Orpheus or his followers; that the Derveni papyrus has little in common with the Gur&#244b papyrus, apart from their being preserved on the same material; and that late witnesses like Neoplatonists cannot be used to reconstruct doctrines from classical times. However, English-speaking scholarship has long been dominated by Ivan M. Linforth's systematic examination of the evidence in 1941, which turned out to be a classic landmark of scepticism: <i>The Arts of Orpheus</i> ordered the materials known at the time in a very different way (significantly, the Dionysiac myth was Linforth's last chapter), refuted any significant links between them, and put away Orphism from the academic discussion for half a century. A thorough and updated analysis, therefore, from the opposed point of view, i. e. an attempt to connect the different sets of evidence, is welcome, above all for English readers who cannot handle the exhaustive survey in Spanish edited by Alberto Bernab&#233; and Francesc Casades&#250s, <i>Orfeo y la tradic&#237on &#243rfica: Un reencuentro</i>, Madrid 2008.</p> <p>Chrysanthou announces in the initial paragraph her purpose to take a "fresh look" at the evidence, and indeed does. This boldness has some disadvantages (letting aside the rhetoric of radical novelty that belongs to the genre of dissertations and is too often forced by publishers and research funders): a fundamental synthesis like Robert Parker's "Early Orphism" (1995) is ignored, the Jewish <i>Testament of Orpheus</i> (<i>Orph. Fragm.</i> 377) is taken as an Orphic ritual text (256), and Ptolemy's decree collecting <i>hieroi logoi</i> (<i>Orph. Fragm</i>. 44), a key to understand the Gur&#244b papyrus, is not mentioned. However, most of the evidence and much of the relevant bibliography in different languages is handled thoroughly and originally. The translation and commentary of the <i>Rhapsodies</i> in the final chapter and the appendix is a particularly effective effort to reconstruct a consistent narrative from the many different fragments preserved.</p> <p>When discussing several of the traditional debates, Chrysanthou takes sides without fear, which entails some problems, but also opens spaces for new proposals. Sometimes a higher flexibility would help sustain some of her most radical arguments. For instance, she supposes a single poem behind the gold tablets, and also defends an ultimate aerial eschatology instead of a subterranean one. The latter idea runs counter to the most obvious interpretation of several netherworldly expressions in the tablets, but perhaps if one admits the possibility of different poetic models for each set of tablets, one could also interpret some aerial imagery as an expression of astral hopes. In other aspects, she offers both new insights and new evidence: for instance, the coins from the Ionian colony Phanagoria pointing to a cult of Phanes, and the analogies of the expressions in some gold tablets with the <i>Eighth Book of Moses</i> are fruitfully brought to the discussion. Sometimes speculation goes too far, e. g. regarding the preservation of ancient traits of oral epic tradition in the <i>Rhapsodies</i>: interpreting the Iliadic mentions of the sceptre as borrowings from an Orphic poem because of its presence in the <i>Rhapsodies</i> (328-330) is improbable: Hesiod offers a much closer parallel (<i>Theog</i>. 30) and the sceptre is not even mentioned in the Derveni poem. The praiseworthy enthusiasm about a field of study does not need exaggerating its "archaicness" (357) and its importance - the phantom of pan-Orphism should always stand as a warning of how dangerous (and harmful) overenthusiasm can be.</p> <p>Inevitably each scholar will have divergent interpretations about many details along such a wide-ranging array of sources. Chrysanthou generally manages, however, to separate the presentation of the uncontroversial aspects of each set of evidence from the more subjective ones, which makes her work a helpful guide through the sources for those who approach them for the first time. The final synthesis, which defines Orphism as a "practical theology" with different strands, is clear and well argued.</p> <p>Due to its source-based approach and systematic structure, the book can doubtless be recommended as an introduction for newcomers to the Orphic evidence - who should nevertheless complement it with a more sceptic survey like the abovementioned ones. Chrysanthou's book can also be inspiring for readers well versed in Orphism due to her engaging approaches to the traditional controversies and her effort in bringing new evidence and insights to them, although, as it is usual in these debates, her conclusions about specific sources and the overall portrait she draws with them will find little consensus.</p> <p class="italic" style="text-align: right">Miguel Herrero de Jáuregui</p> </div> </div> </div> <div id="page_footer"> <div class="ie6_font_size" id="separator"></div> <p>issn 1618-6168 / www.sehepunkte.de <img height="10" src="/images/sp10.jpg" width="10"> </p> </div> </div> </body> </html>