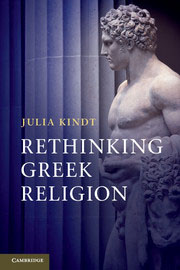 In this book, Julia Kindt proposes to look at Greek religion from a viewpoint different from the dominating perspective of the last decades, in particular that of Catherine Sourvinou-Inwood, Walter Burkert and the Paris school, which derives from postulates that ultimately go back to the religious anthropology of Émile Durkheim through the mediation of Clifford Geertz. [1] She aims to transcend the polis-approach that takes religious life and discourse as completely mediated by the civic community and does not consider important spheres such as personal experience or magic - spheres whose central place in Greek religion her book aims to underline.

Rethinking Greek Religion is composed, apart from brief introduction and conclusion, of six chapters of unequal importance (the first three spring from previously published articles). The key chapter is the first one, which argues forcefully for the insufficiency of models that would consider all religious life in Greece as embedded in the polis. This approach, Kindt claims, imposes an internal consistency which is alien to many religious phenomena (e. g. Orphism or magic are artificially construed as anti-civic) and unable to grasp their internal flexibility. The polis-approach tends to concentrate only in communal ritual and neglects private experience, personal beliefs, and any activity that takes place under the polis level. On the other hand, it tends to draw a dichotomy local vs. panhellenic, in which all religious manifestations that take place above the polis level are artificially labelled under the second term and considered expressions of Greek unity. Finally, the polis approach tends to draw a firm chronological boundary in Hellenistic times, disregarding the multiple lines of continuity that link the political and religious life of Greek cities in later centuries with those of classical times.

The following chapters expand this program through the analysis of some case studies. Chapter 2 departs from the anecdote of Parmeniscus, who became unable to laugh after visiting Trophonius' oracle, and regained laughter when he saw the primitive wooden statue of Leto at Delos, which was completely different from the majestic image he had expected. This story is used as an example of an individual experience of religious visualization, which takes place in a flexible system of imaginations of the divine. Chapter 3 uses the recycling of the properties of the Thirty Tyrants into processional equipment in 4th century democratic Athens as an example that the symbolic value of religion is not just an ornamental disguise of socio-political interests. Chapter 4 focuses on binding spells (katadesmoi) in Athens to show that magic cannot be separated from polis religion, since magical practices were deeply embedded in civic religious life - in spite of the efforts of Plato and other ancient authors to distinguish legitimate from illegitimate religious behaviours. Chapter 5 takes the dedications in the temple of Zeus at Olympia as a case study to show that the categories of local and panhellenic cannot be the only poles to classify Greek religious manifestations, since multiple identities at different levels below and above the polis can coexist and compete in the same space. Chapter 6 explores the tales of love of statues (agamaltophilia) of Aphrodite in texts of Imperial times (Philostratus, pseudo-Lucian and Clement of Alexandria) which show the widespread existence of beliefs and theological notions about the nature of the gods and their availability to human knowledge. Though each chapter has its own final summary, a brief general conclusion ties up their partial contributions to the general program already sketched in the introduction and the first chapter. Thus clarity and unity are achieved, though sometimes at the price of some excessive insistence in issues not so hard to grasp: for example, the obvious fact that many personal religious experiences or speculations may take place independently of the polis; some basic issues are over-emphasized in a tone of exciting novelty: "a certain Apollonius of Tyana" (104) or "the incarnation (sic!) of Christ" (184).

In Kindt's own words (7), "all chapters combine a rigorous reading of primary sources with a discussion of the larger conceptual and methodological issues arising from them". However, the latter occupies more than three quarters of the whole book, while specific case studies are just examples briefly dealt with of the methodological premises that have been previously developed at full length. Though it successfully seeks to combine sophistication with clarity and avoids jargon, this book is not meant to be an introduction to Greek religion for beginners, but an appeal to specialists to redefine some previous conceptual boundaries. The ultimate value of such studies is their contribution to a better understanding of ancient sources, and although at times this one remains in the abstract level, it has some valuable inputs to make in that direction, mainly its blurring of rigid boundaries: certainly an excessive "hermeneutical stress" that bans specific terms or establishes quasi-dogmatic categories in the study of Greek religion, rather than helping, contributes to a distorted comprehension of its nature. In fact, experienced scholars, in spite of occasional "nice round sentences" that should not be taken out of context when evaluating their work, [2] seldom fall into such methodological traps, but many young researchers do. Kindt's book helps to prevent rigidities in the study of ancient religious material and to rehabilitate concepts like "belief" or "theology" that, once exempt from Christianising connotations, are useful to understand Greek religion. So its reading will doubtless be helpful for researchers on the field.

[1] The authoress is not alone in this enterprise. A parallel criticism of Sourvinou-Inwood's approach in J.N. Bremmer, "Manteis, Magic, Mysteries and Mythography: Messy Margins of Polis Religion?", Kernos 23 (2010), 13-35. As Kindt fairly acknowledges in the introduction and in the respective chapters, several of her points of view about personal religion, magic, panhellenism, or "Greek theology" have been recently shared by other scholars.

[2] In academic publications, editorial requirements of (over)emphasizing one's contributions often lead to one-sided presentations of the predecessors' positions, or to put many scholars in a single bag unfairly represented by an extreme view (or by a basic work for non specialist readers like N. Evans, Civic Cults, Berkeley 2010). Serious functionalist approaches will hardly feel represented by a consideration of religion as merely "a tool for individuals to achieve their ambitions" (190). Burkert's positions about Orphism and mysteries are better represented by his specific studies ("Craft Versus Sect: The Problem of Orphics and Pythagoreans" in B. Meyer / E. P. Sanders (eds.), Jewish and Christian Self-Definition, Philadelphia 1982: 1-22, or Ancient Mystery Cults, Cambridge MA, 1987, not mentioned) than by his general remarks in his (earlier) Greek Religion. For a defence of Sourvinou-Inwood's position, more nuanced than her radical sentence about "polis religion embraces, contains, and mediates all discourse", cf. R. Parker, On Greek Religion, 2011, p. 58. Nevertheless, Kindt's status quaestionis are generally quite balanced and complete (discounting the omitted Italian bibliography).