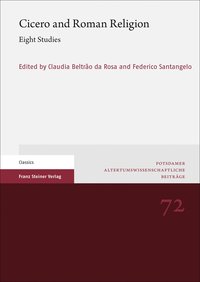 The past few years have seen a vibrant renewal of interest in Cicero's central role in the Roman history of ideas. Recent work has shown how Cicero interacted with and transformed the contributions of other intellectuals in order to craft a legacy for himself as a key figure in Roman thought. [1] At the same time, scholarship on Roman religion has shown that the authors of the Late Republic play a crucial role in shaping our ideas of how the Romans thought about their gods. [2] Although there has been comparatively little work focused exclusively on Cicero and Roman religion, the volume under review offers an attractive combination of these two interests. [3]

While it has its origins in a conference on Cicero and religious statues held in Rio de Janeiro in 2017, the broader scope of this collection of essays is an examination of the intersection between politics and religion in various Ciceronian works. On the one hand, it offers scholars of Roman religion a set of case studies showing what Cicero can contribute to some of the field's major scholarly issues. On the other hand, for scholars of Cicero, it provides a sense of how a variety of texts respond to a single theme, namely the role of the gods in the Roman state. Moreover, the essays use a variety of methodologies, which models the diversity of approaches that one can take to the volume's central themes.

After an introduction by the editors that establishes the scholarly background, the reader is first asked to think about the role of religious professionals in Roman politics. Valentina Arena's essay discusses the innovative nature of the regulations pertaining to priests in Book 2 of De legibus. The themes of this essay, especially Cicero's ideas about the unquestionable authority of religious professionals, are picked up later in the volume by María Emilia Cairo, who uses Jan Assmann's work on cultural memory to explore the role of priests in De haruspicum responso.

Two other contributions discuss gods and their statues in Cicero. Claudia Beltrão da Rosa sets Cicero's various references to a statue of Jupiter in In Catilinam 3 in the context of his broader thoughts about the relationship between divine powers and the physical objects representing them. The chapter is a prime example of how the essays in this volume build on previous scholarship: the parts about In Catilinam 3 should be read in dialog with Ann Vasaly's landmark discussion of the same speech [4], but Beltrão da Rosa's contextualization across Cicero's œuvre prompts us to consider whether he had a unified set of ideas about the function of divine statuary. In this essay, the statue of Jupiter becomes part of a wider discourse in which Cicero thought about statues as interfaces of communication with the gods. A second essay on these themes (Patricia Horvat and Alexandre Carneiro C. Lima: "The Ontophanies of Diana in Segesta") also stresses the importance of statues in mediating relationships between gods and mortals, but does so by taking a phenomenological approach to Verrines 2 4.72-82.

Cicero's intellectual engagements with his contemporaries take center stage in Maria Eichler's ("Epicurean pietas and Political Action in Lucretius and Cicero") and Greg Woolf's ("Foreign Gods in the Age of Cicero") chapters. Once more the two contributions showcase different methodological approaches. Eichler relies on a close reading of selected passages from Lucretius and De legibus, whereas Woolf offers a broad history of the diversity of religious thought from the Age of Cicero to the Early Empire.

Federico Santangelo ("Cicero on Divine and Human Foresight") explores prudentia and providentia, two concepts that are difficult to translate adequately into English. The essay therefore combines a study of differences between gods and mortals with insights into Cicero's contributions to our understanding of the technical vocabulary of Roman religious thought.

The final chapter (Katherine East: "Editing Ciceronian Religion in the Enlightenment") will take most readers of the volume into unfamiliar territory, namely Cicero in 17th and 18th-century England. It focuses on various attempts to wrestle with Cicero's ideas about divine providence as expressed especially at the end of De natura deorum. By showing how a group of editors used an ancient text to think through their own theological questions, the essay provides a fitting conclusion to a volume that asks us to ponder Cicero's centrality to our notions about the nature of Roman religion.

Given the diversity of Cicero's surviving works, it would be challenging to synthesize a Ciceronian approach to religion across all the genres in which he wrote. Nevertheless, the fact that the essays limit themselves to a small set of speeches and philosophical works is a missed opportunity. Within the context of a volume on Cicero, politics, and religion, the fragments of De consulato suo would have enriched discussions of the boundaries between gods and mortals. The letters concerning plans to commemorate his deceased daughter Tullia by constructing a shrine in her honor (Epistulae ad Atticum 12.18 [Shackleton Bailey 254] and 12.36 [Shackleton Bailey 275]), likewise, would have provided points of dialog with the discussions of the physical representation of the divine in the volume. It is therefore easy to see how the exploration of the various themes found in this volume could be expanded to consider Cicero's corpus more broadly. Moving beyond texts and genres, it should also be clear that a reader looking for work on Cicero and personal religion, for example, may be disappointed.

In sum, while neither a scholar of Cicero nor one of Roman religion will find every interest catered to in this volume, the editors and authors are to be congratulated on putting together a stimulating and useful reference point for further work in the field. The reader will encounter old and new questions in the essays, all accompanied by extensive and up-to-date bibliographies. There is considerable space for further work on Cicero and the Roman gods, and this volume is a fruitful place to start.

[3] For other substantial work on Cicero and Roman religion, see Spencer Cole: Cicero and the Rise of Deification at Rome, Cambridge 2014 and Part III of Ingo Gildenhard: Creative Eloquence: The Construction of Reality in Cicero's Speeches, Oxford 2011.

[4] Ann Vasaly: "Transforming the Visible: In Catilinam 1 and 3" (Chapter 2 in Representations: Images of the World in Ciceronian Oratory, Berkeley, CA 1996).