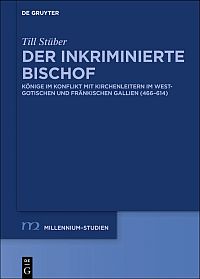 The volume presented here is the result of the research whose author, Till Stüber, carried out as a doctoral thesis in co-tutelage at the Freie Universität Berlin and the Université de Strasbourg. It deals, in all its complexity, with the conflicts that broke out between the Gallic bishops and the Visigothic and Frankish kings between 466 and 614 as a way of understanding the relations between post-imperial monarchies and ecclesiastical hierarchies. Specifically, the study analyses both the factors that gave rise to such disputes, as well as the different mechanisms for their resolution and the impact they had on the political and religious scene. In particular, the author focuses on those conflicts that arose due to possible ruptures of loyalty to the reigning king.

To this end, the author divides the volume into three blocks. The first of these, of an introductory nature, presents the problems under study, the pertinent state of the question, the questions and hypotheses, and the structure of the text. In this block, the author, far from limiting himself to presenting the subject of analysis, presents some enormously interesting reflections on the nature of episcopal power and the problems which the Gallic episcopate had to face in the post-imperial period. It also develops in detail the great debates which have marked the study of the episcopal figures, from the foundations of their authority, to the question of their recruitment, and linking it to the theme of work, to the conflicts which arose in the course of their ministry.

The second block breaks down the casuistry evaluated in the paper, made up of a total of twenty case studies; each of them analysed in great depth and contextualised in an equally comprehensive manner. Here the author focuses on the different actors on stage and their action, but without losing sight of the institutional framework in which the conflicts take place. The block in question is divided into two chapters, one focused on the Visigothic kingdom of Toulouse and the other on the Merovingian kingdoms. As far as the Visigothic kingdom is concerned, the first four sections are devoted to the casuistry available during the reign of Euric (466-484). The chapter in question opens with the cases of Crocus with an unknown seat [1] and Simplicius of Bourges, who were subjected to exile for undetermined reasons that the author attempts to elucidate, despite the scarce information available. With lesser documentary problems the author finds himself reconstructing the cases of Sidonius Apollinaris, bishop of Clermont, Faustus of Riez and Marcellus de Die, who also suffered the fate of exile at the will of the Visigothic king. The reign of Alaric (484-507) is the chronological framework for the last three sections of the chapter, which analyse the exile of Volusianus and Vero both bishops of Tours, Caesarius of Arles, and finally Quintian, who was originally the ruler of Rodez, and later of Clermont.

The next chapter of this second block deals with Merovingian casuistry, which begins in the mid-sixth century, as the author did not identify any clear prior cases to be developed. The chapter opens with the case of Nicetius of Trier, who was sent into exile at the end of the reign of Chlothar I (511-561). The tensions between Leontius of Bordeaux and the Merovingian king Charibert (561-567) are the focus of the following section, followed by two others devoted to the disputes that took place in the kingdom of Guntram (561-582) and affected the monarch in one way or another. In particular, the cases of Munderic of Langres, Sagitarius of Gap and Salonius of Embrun are analysed. Chilperic I (561-584) came into direct conflict with Praetextatus of Rouen and Gregory of Tours, with unequal results in each case, as can be seen in the fifth section of the chapter. The author also devotes a section to the conflicts arising from the Gundovald revolt, specifically as a result of the collaborationism of some bishops, such as Theodore of Marseilles, with the usurper. From the kingdom of Austrasia, the author takes the case of Egidius of Reims, who was tried and accused of treason. From the years that Burgundy was ruled by Thierry II (595-613) and his grandmother Brunhild, Desiderius of Vienne was condemned to exile and, on his return, stoned to death. Finally, the chapter closes with the episcopal controversies that took place when Chlothar II (584-629) appropriated Burgundy, which particularly affected Lupus of Sens and Leudemond of Sion.

Having analysed the case studies, in the third block of the book the author proposes to compare and evaluate the casuistry thematically according to the structural causes he finds for each conflict and the methods used for their resolution. The first chapter of the block identifies and develops the different factors, both real and assumed, that could have originated the conflicts. Previously, the author warns of the existence in some cases of multi-causal conflicts, while in others he acknowledges the difficulty of attributing one cause or another as the generator of the conflict. Developing these conflict-generating factors, the author notes that an immense majority of cases relate to bishops accused of placing their allegiance to foreign kings. However, far from limiting himself to analysing these conflicts, he presents a fairly complete overview of the implications of providing episcopal loyalty to kings. In relation to this first cause, another factor identified is the integration of a particular bishop into aristocratic networks opposed to the reigning rulers or his family. The geostrategic location of the see whose bishop comes into conflict with the king is another of the factors identified, which serves as a pretext for the author to address the importance of metropolitan bishops and the underlying problems of the ecclesiastical provinces. The fourth factor identified is the internal competition within the dioceses, particularly between ecclesiastical sectors, which could result, for example, in the banishment of the bishop concerned. Finally, the determinism of a certain "episcopal identity", in particular the clash of positions around competing notions about the figure of the bishop and his behaviour, constitutes the last factor discussed as a generator of conflict.

The next part of the block is dedicated to reviewing the mechanisms for resolving these conflicts. Especially interesting is the first section of the chapter, which analyses the legal element of these conflicts, which has tended to go unnoticed among historiography. Here the author observes the coexistence and clashes between different legal cultures, both in the secular and ecclesiastical spheres, in what constitutes one of the strong points of the study. Apart from this more institutional aspect of the conflicts, the author also devotes a space to the informal mechanisms of conflict resolution, which would have been used more frequently. The chapter closes with a study of the hagiographic accounts which include some of these conflicts, in particular in the narrative strategies used to praise episcopal figures to the detriment of their enemies.

The volume concludes, on the one hand, with an abundant list of sources and scientific literature which highlight the enormous volume of information and documentation handled, and on the other hand, with an exhaustive and extremely useful analytical index of people and places.

In order to assess the global nature of the study, we are undoubtedly faced with an investigation of the highest scientific quality. The main strong point of the work is the comparative element that articulates it. The choice of the case studies is more than relevant, as it compares two post-imperial political realities that shared Gaul as the same scenario of action. However, a specific section is missing in which a general balance is presented on the relations between the Gallic episcopate and the Visigothic and Merovingian kings during the whole period. This absence, which is only partially remedied in some sections which highlight the necessary collaboration between the two powers, may give the impression not intended by the author of perceiving such relations in more negative terms than they actually were, as well as depriving us of a more global perspective. However, this is a question that in no way detracts from the result of the work, on whose analytical depth and scientific excellence we insist. Unquestionably, this is a work that will mark a turning point in the understanding of the relationship between the episcopate and the monarchy in post-imperial Gaul.