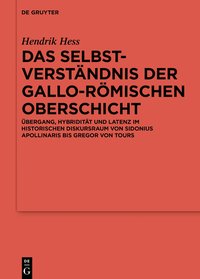 The introduction to Hendrik Hess's study of the Selbstverständnis of the Gallo-Roman upper classes in the fifth and sixth centuries, provides a useful statement of current views of the subject area, of the methodological strategies that have been used, and of those that the author intends to follow.

The opening chapter (which constitutes the most substantial section of the book) gives what is a largely standard account of the self-representation of the Gallo-Roman upper class in the letter collections of the late fifth and early sixth centuries, with short discussions of the leading authors (Sidonius, Ruricius and Avitus) and of some of the major issues: secular office, family, luxury, romanitas, education, the barbarians and ecclesiastical office. On most of these issues there are useful observations, but many of the sections are too short to provide significant nuance, and in places this is what is most needed. For example, with regard to the basic matter of letters and letter collections, the author has registered that the collections were not all put together in the late fifth or early sixth century (in fact the only collections that certainly date from the period are those of Sidonius, and the first book of Ruricius' letters). But he has not considered the implications of the fact that most of the collections that we now have may have been created in the eighth and ninth centuries from surviving private and institutional archives. This holds true for the collections of Avitus, Ennodius (unaccountably ignored in the discussion - although the Ennodii were a Gallo-Roman family), the Epistolae Austrasicae, Desiderius of Cahors, and possibly Book II of Ruricius' letters. There is no consideration of what the implications of this might be, but the author nevertheless talks of the Zirkulation der Briefsammlungen. Moreover, although some attention is paid to the date of the Sidonius collection, and to the fact that the first seven books appear to date to his time in exile, the implications of that are not fully explored. Sidonius was constructing his own persona in very specific circumstances. Nor is any attempt made to examine the considerable divergence between the representation of Sidonius in his letters and in his apparently contemporary epitaph, which incidentally gives him a death date of 479 (thus contradicting the theory that he collected his final books of letters in 480). Since the epitaph may well have been commissioned by Sidonius' son, how should one account for the discrepancy between the self-presentation in the letters and the family representation of Sidonius in the epitaph? Now that the epitaph is known to be genuine - something that has only been established relatively recently, and that has not been fully digested within the scholarship devoted to Sidonius - it is important to see how this modifies traditional views of the Gallo-Roman aristocracy: in my view it has huge implications. Hess lists Furbetta's article on the epitaph in the bibliography, but he appears to have paid no attention to it - and he does not mention the articles by Prévot and Montzamir. Essentially Hess has provided a useful overview of letter-writing in the second half of the fifth century, and early sixth, but it has not paid enough attention to recent studies of the nature of letter collections, or of the significance of the epitaph of Sidonius, with all that it implies for the reconstruction of the Selbstverständnis of his family.

The analysis of Sidonius, Ruricius and Avitus is followed by a chapter on Zwischenräume, which precedes a discussion centred on Venantius Fortunatus and Gregory of Tours. The first of these chapters deals briefly with the law codes of the period (primarily the Roman codes of the Visigoths and Burgundians), the epitaphs, the Epistolae Austrasicae and Marius of Avenches, and the hagiography. Exactly how we are to understand the concept of Zwischenräume between Avitus and Fortunatus is unclear: certainly we are not dealing with an intermediate chronological period. The earliest letters in the Epistolae Austrasicae belong to the lifetime of Sidonius, the latest to that of Gregory (as the fourth chapter acknowledges). Very few belong to the period in between the two authors. Similarly Marius is an exact contemporary of Gregory. Several of the epitaphs do fall into the intervening decades, and deserve detailed consideration, which they do not receive. And although a case can be made for some of the legislation reflecting the values of the Gallo-Roman aristocracy, this too would require detailed discussion, both of the law and of some identifiable lawgivers (Parthenius and Asclepiodotus spring to mind). The selection of saint's Lives referred to is curious, above all because it is too short. The important work by Goullet and Heinzelmann is cited, but only in passing. It could have provided a starting point for the creation of a dossier of Vitae that shed light on the representation of the aristocracy. There are Lives that would have been relevant to the subject under discussion, several of them discussed recently by Christian Stadermann in his work on the Goths, and not so long ago by Bruno Dumézil in his monograph on Les racines chrétiennes de l'Europe. For the question of Gallo-Roman Selbstverständnis it would certainly have been worth analysing a text like the Life of Apollinaris of Valence or that of Bassus of Saintes. But all this is passed over too quickly.

The discussion of Venantius Fortunatus and Gregory provides a neat survey of their views on romanitas, amicitia and nobilitas. But it adds little to what has been written in recent years, and there are substantial gaps in the bibliography, especially with regard to Fortunatus. The important new edition for Budé by Marc Reydellet and Solange Quesnel is not referred to, and Reydellet's study of La royauté from Sidonius to Isidore is not mentioned, although it provides valuable consideration of Fortunatus' language. Michael Roberts' edition of Fortunatus is of less importance, and one article of his is cited, but his significant monograph on Fortunatus is not. There is a reasonable précis of the current state of scholarship on the survival of romanitas, but it is not long enough to add anything to what is already in print. And it would have been useful to say more about some contemporaries of Gregory and Fortunatus. Thus, although Bruno Dumézil's article on the patrician Dynamius is cited in the bibliography, there is no consideration of the Provençal aristocrat's writings.

The chapter devoted to Gregory and Fortunatus is followed by a brief Ausblick on the seventh and eighth centuries. It touches on Desiderius of Cahors, but as with other sections of the book it is too short to add to existing discussions, and it is not detailed enough to provide basic orientation for someone who does not know the period.

Overall, this provides a cursory survey of a subject that has attracted a good deal of attention in recent years. For the most part, it presents an accurate account of the status questionis, but despite two or three more extended passages of discussion, it is too brief to add to it, although it does display a clear awareness of the latest appropriate methodology. And there are some unfortunate gaps. The epitaph of Sidonius could have been used to raise major questions about the Selbstverständnis presented in his letters, and it is a reminder that self-representation is as much a situational construct as ethnicity is now recognised as being. To add to our understanding of this subject more precision is needed, rather than an overview, however accurate it may be.