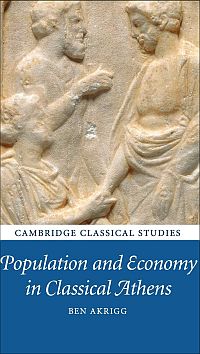 As Akrigg states, this volume has two goals: "[t]he first is to provide an account of the historical demography of classical Athens: that is, the size and structure of its population, and how these changed over time. The second, more important, is to show why such an account is necessary" (1). Akrigg succeeds admirably in the first aim, but is less successful in the second.

The volume is composed of eight chapters in two unequal parts. The first part of the book is dedicated to establishing the population of Attica down to the start of the Peloponnesian War in 431 BCE. This task comprises the first five chapters of the book, as well as part of the sixth. The remainder of the sixth chapter, as well as the seventh, examine a number of implications resulting from this demographic information. The eighth chapter represents a summing-up of Akrigg's arguments.

The emphasis of Chapter One, "Introduction," is on the fact that previous Athenian demographic studies have largely examined the fourth century, and stem from an interest in the extent of participation in Athens' democratic system. Akrigg rightly promotes the use of demography as an addition to the historian's toolbox when examining the development of classical Athens and its institutions.

Chapter Two, "Population Structures," examines the question of the Athenian citizen population from the perspective of age and sex structures. Much more ink is spilt on age structures. In this chapter Akrigg primarily examines the arguments of previous scholars on these points, and examines the strengths and weaknesses of the various approaches to estimating ancient populations. A short (~4 page) section examines sex ratios, and Pomeroy's arguments concerning infanticide and sex imbalance in classical Athens. Akrigg concludes that the evidence does not support Pomeroy's contentions.

In Chapter Three, "Population Size 1: Citizens", Akrigg examines the evidence from the fifth century, which includes the demographic implications of the "constitution" of Kleisthenes; Herodotos' account of Athenian manpower during the Persian Wars; the Themistokles Decree; some indirect indications of Athens' population during the Pentekontaetia; and the claims of Thucydides 2.13 about the size of Athens' armed forces in 431 BCE. With Gomme, Akrigg decides that there is no compelling reason to reject the figures that Thucydides gives. He concludes ultimately that "Hansen suggested that at the start of the [Peloponnesian] war there must have been at least 60,000 citizens (and a total of roughly 250,000 inhabitants). Such a figure is compatible with Thucydides' account, but so would be a larger total." (84)

The fourth chapter, "Population Size 2: Non-Citizens" deals with the even more vexed question of the size of the Athenian metic and slave populations. Akrigg summarizes the arguments of previous scholars on this subject, and determines that more than 30,000 male slaves were needed for service in the silver mines and in the Athenian navy; this of course does not include female slaves or children, nor slaves in the agricultural, domestic, and small manufacturing sectors. He notes that "[the] overriding impression given by the literary evidence...is that slave-ownership was normal and widespread, if not universal, among the whole citizen body, and so the natural inference is that the slave population was indeed very large." (95) The second half of the chapter, on metics, was to my mind less successful. In particular, I find the conclusion that metics were more closely aligned with slaves than with citizens to be unsettling. It seems to me an overly broad characterization that elides the gradations of status that were possible within the metic community, even though Akrigg himself notes that the term 'metic' encompassed a wide range of people from varying socioeconomic strata, both Greek and foreign.

In chapter Five, "Population Changes", Akrigg makes the argument that the population of Attica appears, on the face of the evidence, to have doubled in the period between the Persian Wars and the outbreak of the Peloponnesian War, and that it then underwent a rapid contraction thereafter due to the effects of the war and the plague. He notes that "[s]uch changes would have had quite profound and far-reaching effects." (169)

One might expect that these effects would be discussed in detail in chapter six, which has the promising title "Immediate Implications of Population Change: War and Food". Unfortunately, in some respects the chapter fails to live up to its title. Many of the calculations made in this chapter seem rather to be dealing with the same, large set of population numbers reached by Akrigg for Athens in the period just prior to the Peloponnesian War. As such, in some ways they represent the absolute maximums required of various commodities needed to sustain the Athenian population. Little attention is paid to the effects which population change must have played in Athenian political and economic decision-making during the fifth century.

Only with Chapter 7, "Beyond Food and Fuel", do we get a sustained analysis of the possible implications of this population change. As part of this investigation, Akrigg also examines the wealth distribution of Attica, adducing prior arguments on this subject made by Osborne, Taylor, Scheidel, Foxhall, and others. To my mind, Akrigg rightly questions the extent to which fifth-century Athens was an exception to Scheidel's model of economic expansionism and wealth inequality. I am less convinced of his argument that the economic benefits of empire in the fifth century actually exacerbated wealth inequalities in Athens, to the extent that "[h]ad the Peloponnesian War not happened, or taken a different course, or had the plague not struck Athens, then the democracy would have come under increasing strain and might not have lasted so long." (222-223). This seems to me to underestimate the Athenian ability to adapt and deal with crisis. Akrigg's discussion in this context of the Brea Decree (IG I3 46) is brief and fails to convince that the poor did not benefit from the empire. Klerouchies certainly allowed for the possibility of bettering one's financial situation, and the size and number of Athenian klerouchies would have acted to alleviate land pressure and potential wealth inequality in Attica. Increasing pay for political participation during the fifth century may also play a (small) role here.

The second half of this chapter uses evidence from the fourth century to support Akrigg's contention that one of the results of the population decline during the Peloponnesian War was land redistribution in Attica itself. While there is some evidence that supports this idea - Claire Taylor's work on the increased incidence of rural demotics in Athenian politics in the fourth century among them - other arguments that Akrigg makes seem less convincing. I am hesitant about his idea that the emergence of the "cocky slave" in comedy might be the result of an increase in the value of slaves, especially given the inherent difficulties in using comedy for arguments of this kind and the fact that we possess no other complete comedies of the fifth century outside of Aristophanes.

Akrigg is to be commended for producing an erudite demographic study of Athens in the fifth century, which should serve as the new baseline for future work in this area. Work remains to be done, however. One particular weakness is that many of these arguments appeared elsewhere prior to this volume. [1] While it is useful to have them presented as a unified whole, the fact that the bibliography does not seem to have been updated is a serious concern. As a result, there are numerous recent relevant studies that are omitted from consideration. One might also wish that the volume had more directly confronted some of the questions that arise concerning the implications of this demographic data, but this is left for future studies to pursue.