John J. Michalczyk: Filming the End of the Holocaust. Allied Documentaries, Nuremberg and the Liberation of the Concentration Camps, London: Bloomsbury 2016 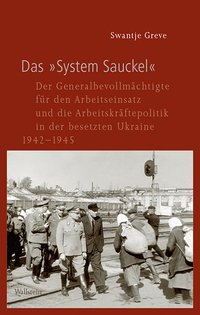 During the main IMT Nuremberg Trial, Fritz Sauckel, the General Plenipotentiary for Labour Deployment, epitomized Nazi Germany's system of brutal slave labor. Nevertheless, and despite his prominent position in the Nazi Party and in the state, he has largely been left out of the rich biographic literature about the Reich's leaders. Furthermore, as the author points out, "Bislang fehlt es an einer umfassenden Studie zum GBA [Der Generalbevollmächtigte für den Arbeitseinsatz], welche die Organisation der Dienststellen, ihr Personal und ihre konkrete Funktionsweise im Zusammenspiel mit anderen Organisationen untersucht." (13). Swantje Greve studied Sauckel and his offices - particularly the GBA - through the prism of Network analysis, which in recent years has become quite popular in historical studies of persons and organizations. This approach focuses on personal und informal control and management mechanisms. In this study, Sauckel's networks in both the political/administrative center and on the periphery help to explain how he was able to turn the GBA into such a crucial organization of the Third Reich. The common view of the Nazi polycratic system as ridden with conflicts and rivalry is of little help here, argues Greve (20-21). As noted in the summary of the first part of the book, trust was a particularly crucial element in the cohesion and functionality of this Network (273). Based among others on the analysis of official and private correspondence among members of Sauckel's networks, Greve remarks that "Doch sind die Hierarchien im Netzwerk als flach zu interpretieren, die Akteure pflegten einen engen und vertrauensvollen Umgang miteinander, der häufig auch über die dienstliche Beziehung hinausging" (112).

The first part of the book describes the creation and workings of Sauckel's first network, the "Thuringia Network" he created as Gauleiter and Reichsstatthalter of this region. While combining a Party and a regional government function, Sauckel succeeded in creating control organizations using his acquaintances from earlier political activities and even from his internment in France in WWI. These contacts also helped him to bring the region's industry and economy under his tight control, as demonstrated by the expropriation of the Jewish-owned Simson Works and the parallel development of the Gustloff trust as a leading armaments concern (90-91).

In this regard, Sauckel's multiple contacts proved valuable particularly in the wartime conception and execution of the megalomaniac REIMAHG bomb-proof factory scheme. Its local-independent nature in terms of management and resources made it unique among similar large-scale armaments projects that were initiated in 1943-1944.

The establishment of the GBA and its functionality - based largely on the old Thuringian networks - is the topic of chapters 2-4.

Nevertheless, as the author convincingly portrays, a failure attributed to a single Ministry of Labor official gave the final motivation for the creation of the GBA (130-133). Greve argues in contrast to previous studies that the Arbeitsministerium was not left as an empty shell following the establishment of the GBA. Instead it was Göring's Vierjahresplan office that lost control over the initially subordinated GBA, because Sauckel's power and authority stemmed directly from Hitler.

The leadership of the GBA relied heavily on the old Thuringia network, and many members of its staff kept their old jobs there. With such a reliable and experienced staff it is no wonder that the GBA proved quite effective initially. Cooperation and collaboration with different Nazi Party and state organizations further enhanced its ability to effectively fulfil its tasks. The functionality of the GBA demonstrates how personal contacts sometimes defused conflicts in the Nazi polycracy. A particularly interesting conflict of interests between the GBA and the Armaments Ministry, which was not satisfactorily solved, took place in France in 1943-1944, and could have been described in more detail (242-244).

The GBA's eventual failure to recruit enough workers was acknowledged in early 1944 when Sauckel "zunehmend mehr Zeit in seine Aufgaben als Gauleiter in Thüringen investierte" (247). As Greve cleverly points out, this retreat to the Gauleitung also had to do with the increased authority of the Gauleiters at this late phase of WWII, as effectively demonstrated by the REIMAHG bomb-proof factory project undertaken by Sauckel in Thuringia.

The second and shorter part of the book presents a case study of the recruitment drives in the occupied Ukraine. It is somewhat disconnected from the first part of the book, where the networking theory is beyond doubt central to understanding of the functionality of the GBA. Despite this methodological weakness, it is a well-chosen case study, especially when considering that 1,2 of the 1,6 million workers recruited by the GBA until July 1942 came from the Ukraine (365). Economic plundering determined the evolving manpower recruiting policy to a large extent, which required the cooperation of several Reich agencies. We learn in chapter 2 that even before the establishment of the GBA some of these agencies recruited laborers in the Ukraine. During this early period large numbers of workers came voluntarily, but as the author rightly argues, this fact does not change the basic brutal nature of the German workforce policies (334 f.). As described in chapter 3, once the GBA took the lead, voluntarily labor had largely diminished. The Wehrmacht generally supported the subsequent forced recruitment drives, but there were several clashes, where conflicts of interest emerged. The end of the GBA presence in the Ukraine in January 1944 signaled the general collapse of the GBA's labor recruitment.

As a whole, this book presents a fresh and up-to-date study of one of the most powerful wartime agencies of the Nazi state. The network theory and the detailed case study of the GBA's operations in the Ukraine make this book highly useful for anyone interested in these topics and in the general functioning of the Nazi state.