John J. Michalczyk: Filming the End of the Holocaust 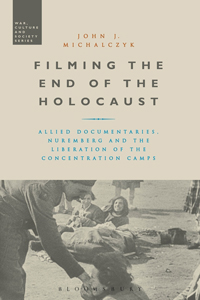 The visual image of the Holocaust was determined to a large extent by films shot by Allied cameramen shortly after the liberation of several concentration camps. Some of these films were shot by film crews headed by notable directors, like Alfred Hitchcock and George Stevens. They were shown in contemporary newsreels, and outtakes from them were used in the Nuremberg Trials and were screened to German civilians as part of their postwar reeducation. Since the Second World War, these films have been included in numerous documentaries and feature films. The widespread dissemination and their long-term impact thus make Michalczyk's book potentially highly relevant to scholars and students of the Holocaust, of historical films, and of the war crimes trials of the postwar period.

In the first chapters, the author explains the basic motivation for the trials and the decision to use moving images as evidence in court. He examines the creation of American, British, Soviet, and French liberation movies and the production of contemporary documentaries about the concentration camps. The author describes some of the movies in detail, including those that were never finished. At the heart of the book is chapters 5, which depicts the way liberation films were used in the Nuremberg Trials. The last chapter describes the production of liberation documentaries after the Nuremberg Trials. At the end of the book, there is a somewhat haphazard but useful filmography of the general topic, as well as a similarly haphazard chronology and bibliography (without archival sources).

Unfortunately, there are several problems with this book. Prominent among them is sloppy editing. There are many repetitions, cumbersome sentences and poor phrasings. "As the US Signal Corps continued to film throughout Europe following the D-Day invasion in northern France and the landing in Sicily, 'the soft underbelly of Europe,' one unit with Stevens on May 3 filmed the door and sign over the showers, 'Brausebad,' as well as the piles of bodies, now bones and ashes, remaining in the ovens" (28). This eclectic sentence fully represents the eclectic style of the text, which is quite difficult to follow. Another sentence that should not appear in a scholarly publication is: "The treacherous Einsatzgruppen, the four major mobile killing units, accompanied the German Army through Poland on its march toward Moscow" (48). Better proofreading was also necessary in order to avoid typos, which are especially apparent when the author uses German phrases, like "Dass ist Faschismus, dass ist Nationalsozialismus," ("That is Fascism, that is National Socialism") (34) or "burgermeisters" (38). In other places, wrong terms, misspelled names and factual errors slip in, like "the First Army of the Ukrainian Front under the command of Marshal Koniev" (59). It should have been the First Ukrainian Front under the command of Marshal Konev. On the following page, the author refers to "US aerial views in 1944" (60) that were incorporated in a 1989 documentary on the liberation of Auschwitz. These are obviously the well-known aerial photos of Auschwitz shot by British (South African Air Force, to be more precise) and American aircraft in 1944-1945.

The description of the creators of the liberation films is uneven. Especially disappointing is the second chapter, titled "The US Signal Corps Encounters Atrocities." Despite its title, there is very little information in this chapter about this important US Army organization that created some of the best-known liberation movies and still photos. The description of the US Signal Corps is limited to a single paragraph on page 21.

The text drifts away from its stated topic in many places. An example includes the section titled "An SS Film as Evidence," which describes the presentation in Nuremberg of a captured amateur film that became quite iconic after 1945 (97-99). Another example is an iconic photo from the Stroop Report, bearing a vague title and no reference to its origin, although it is mentioned in the text on the same page (74). The film and the photo are interesting examples of visual Holocaust-related evidence material, but they hardly have anything to do with "Filming the end of the Holocaust." It seems that the entire sixth chapter suffers from this missing focus while dealing with the (quite interesting in itself) use of wartime propaganda film evidence by the French prosecution in Nuremberg.

It is intriguing that there is no focused theoretical-historical discussion in the book regarding the representation of the Holocaust in the camp liberation movies. Obviously, these films hardly represented the fate of most Jews persecuted and murdered during the Holocaust, since no cameramen were present in the extermination camps and very little film evidence survived from the killing fields and the ghettos in Eastern Europe. Furthermore, some of the iconic liberation films and photos were manipulated or even staged. The Soviet-produced Auschwitz liberation movie is the best known example, and the author dedicated a section to its description. Therefore, the hardly representative images of the liberation to a large extent still dominate the visual image of the Holocaust today.

There are several interesting discussions in the book, among them the question of western authenticity versus Soviet staging, details about the production of specific movies, and the representation of the Jewish victims in the movies and in the trials. Particularly interesting is the detailed description of the preparations for the main Nuremberg Trial, which right from the start included technical facilities for the projection of films in the courtroom. Also interesting is the epilogue, which illustrates the use of liberation scenes in the Eichmann Trial. However, numerous problems make this book difficult to read and to use.