Constantinos Georgiou: Preaching the Crusades to the Eastern Mediterranean 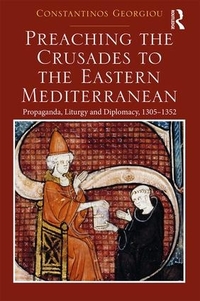 Research on crusading to the Aegean and Eastern Mediterranean in the Fourteenth Century has made several advances in recent years. Among a range of published studies, the two most noteworthy monographs are perhaps Mike Carr's Merchant Crusaders in the Aegean, 1291-1352 (covering crusading in the Aegean) and Timothy Guard's Chivalry, kingship and crusade (covering English crusading).

This present work deepens our knowledge in this field in a number of respects. It offers a thorough narrative history of papal crusading policy in the Eastern Mediterranean up to 1352, followed by a discussion on the papacy's efforts to develop its crusading propaganda infrastructure; particular attention is drawn to the Church's efforts to deepen the presence of crusading ideas in its liturgical practices. Then there is a broader discussion on the popularity of crusading - particularly in France - during the early Fourteenth Century. This work ends with a discussion on the key crusading preachers from this era coupled with an analysis of the sermons they used to rally support for their various campaigns.

These are all topics of the greatest interest and Preaching the Crusades has much to say which is either new or little known. In his account of the papacy's efforts to initiate a new major crusade to the east (Chapter 1), Georgiou offers a painstakingly detailed narrative which is exceptionally thorough in its account of unfolding events. He ably recreates the many obstacles and other imperatives that continually derailed the Church's efforts to raise a large crusading army (passagium generale). The explanations he provides for over a half a century of failure in this regard seem to lie in the specific problems and agendas shaping the policies of the individual pontiffs and kings of France, which - put together - created an adverse environment for such an undertaking. He does not advance any underlying issue which percussively caused each crusade proposal to fail. Having said this the Church was more successful in its efforts to raise smaller campaigns (passagium particular) and naval leagues although these too could find themselves diverted to other causes.

Georgiou's subsequent discussion (Chapter 2) on the developing liturgical apparatus of crusading is very timely, coming so soon after Cecilia Gaposchkin's Invisible Weapons: Liturgy and the Making of Crusade Ideology. Gaposchkin's study focuses on this topic in the period directly before this study and so this present work therefore serves to continue this discussion. Georgiou's analysis on this point reveals the Church's strenuous efforts to plant crusading at the heart of the liturgy, whilst accompanying its propaganda efforts with processions, alms chests and other recruitment/collection devices.

The third chapter turns to the crucial question of whether enthusiasm for crusading waned in the era following the fall of Acre (1291) and, by extension, whether this lack of popularity can help to account for Christendom's persistent inability to raise a major new crusading army. Georgiou's view on this point seems to be that crusading enthusiasm (in France particularly) remained high and he challenges or nuances attempts made by other scholars to explain-away the popular crusades of 1309 and 1320 as the products of socio-economic developments, factors which have been used previously to diminish these expeditions' significance as indicators of crusading enthusiasm.

The final chapter (Chapter Four) changes ground to consider the individual preachers who sought to recruit crusaders for the campaigns of this period. These include figures such as James of Lausanne (Dominican), Pierre de la Palud (Dominican, Patriarch of Jerusalem), and Pierre Roger (Archbishop of Rouen). In each case, Constantinos Georgiou provides biographical data on these individuals before considering the content of their surviving sermons. In many cases the themes touched upon in these orations will be familiar to historians studying crusade propaganda including motifs such as the: the cross of Christ, the Maccabees, and the example set by the audience's crusader forebears. Others are more unusual including Pierre de la Palud's use of the story of the weasel and the basilisk (the story's moral point being that the brave weasel defeats the demonic basilisk) to inspire potential crusaders to take the cross.

Following the four substantive chapters and a conclusion Georgiou also provides a series of five appendices consisting of (i) a list of surviving sources for the crusade sermons of this era and their current location (either in manuscript or published form) and then (ii-v) critical editions of four of these sermons supported by the normal scholarly apparatus.

Overall, this is a very strong piece of work. It demonstrates a real mastery of this topic, providing a very close and detailed analysis. Georgiou is careful not to push the evidence too far and it is notable that he remains cautious when captioning the level of enthusiasm in Christendom during this era (reflecting the slightness of the sources). At times I felt that a bit more context about the papacy's other crusading campaigns on other frontiers would have strengthened this analysis, but nonetheless this remains an extremely impressive piece of work and fills an important place in the growing historiography on the preaching of the crusades.