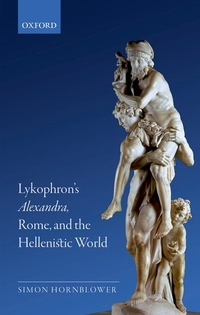 In this monograph Simon Hornblower offers a kind of sequel to his commentary on the Alexandra, transmitted as a work of the Hellenistic poet Lycophron (S. Hornblower, Lykophron's Alexandra, Oxford 2015), where he already announced that there would be a companion piece particularly for the benefit of historians. Therefore in this book the emphasis is on the Alexandra as a political work, inspired by the rise of Rome, and it is approached mainly from a historical angle.

Recalling his arguments of 2015 Hornblower argues that, because of the nature of the Roman elements in it, the Alexandra must be dated in the early second century B.C., i.e. the later 190's, and shows that it reflects issues and events of that period (like the Roman colonisation of places in Sicily and Southern Italy which figure prominently in the Alexandra). Important and convincing elements in his argumentation are also the fact that Cassandra predicts the Roman domination in a way that is not conceivable before the First Punic War of 264-241 B.C. and the identification of the 'wrestler' in 1447 with Titus Quinctius Flamininus, who defeated Philip V of Macedonia at Cynoscephalae in 197 B.C. (3-7). Hornblower also adds a literary argument (6), arguing that the author of the Alexandra knew the work of Callimachus, Apollonius Rhodius and Theocritus. This argument is less strong, because knowledge of these authors does not necessarily imply that the author of the Alexandra was much later, as recent research has made it clear that interaction between contemporary poets, alluding to each other's work, was an important element of Hellenistic poetry. It would, in itself, be conceivable that the Alexandra was part of such an intertextual discourse on issues of poetry and myth among poets of the first half of the third century B.C.

The book is divided in two parts (which follow a useful synopsis of the contents of the Alexandra). In the first part ("Lykophron's Geopolitical World") Hornblower investigates the political reality of the world as reflected in the Alexandra, focusing on (1) the Hellenistic kingdoms and the cities and federations of Old Greece, (2) Sicily and Southern Italy, (3) Rhodes, and (4) Campania, Latium and Rome. In the second part ("Cultural and Religious Contexts") there is a focus on religious aspects, with a chapter on the Sibylline Oracles and similar prophetic texts and a chapter focusing on culture, religion and myths of identity. The book ends with a conclusion with sections about the Alexandra's political nature, its date and the intended audience or readership (where the possibility of performance in Southern Italy is discussed). This is followed by an extensive bibliography and detailed indexes. The book's structure is clear and makes sense, but in order to make its message and arguments more easy to grasp for its readers, it might have been good to add a general introduction, in which, before embarking on the two main sections, Hornblower would have explained its purpose and research questions more clearly right at the start and have given the reader an indication of the connections between the first and the second part.

The approach of the work from a historical angle is undoubtedly an interesting and enlightening exercise and helps our understanding of this difficult poem. Even so, one still wonders how the historical and political dimensions fit in with the work's learned and literary character: why was this message about the political situation presented in a work that was highly obscure, allusive and experimental and who were supposed to be the receivers of this message? There is some attention for this issue on pp. 193-197 about the work's intended audience, but it seems to be a matter that demands further attention and explanation.

As to the Alexandra's position in the literary tradition, although I certainly agree with Hornblower's statement that the poem "is much more than an anthology of sometimes non-standard myths and a collection of puzzles" (187), I have some doubts about the sequel of this remark, that the Alexandra "has a good claim to be the most political, or at any rate the most interestingly political, Greek poem to have survived from the Hellenistic period". Hornblower illustrates this with the example of Theocritus Idyll 17, which he regards as a not very interesting political poem based on flattery (187 n.1). This, however, ignores the intertextual richness of that poem, well discussed in a recent commentary (R. Hunter, Theocritus. Encomium of Ptolemy Philadelphus, Berkeley - Los Angeles - London 2003). It also leaves out of account much recent research on works like the Argonautica of Apollonius Rhodius and the Hymns and Aetia of Callimachus, which shows how, often beneath the surface of the genre conventions, these works engage with political issues of their times in subtle and intriguing ways (e.g., to mention just one example, S.A. Stephens, "Writing Epic for the Ptolemaic Court", in M.A. Harder - R.F. Regtuit - G.C. Wakker (eds.), Apollonius Rhodius, Leuven - Paris - Sterling, Virginia 2000, 195-215). It would have been worth considering the Alexandra in the context of the work of these predecessors and the techniques they used for conveying political messages. In this respect the fact that Callimachus in his Aetia, written much earlier in Ptolemaic Alexandria in the first half of the third century B.C., also gave ample attention to Sicily and Southern Italy should be taken into account too.

In spite of these criticisms, however, I want to emphasize that the book is thoroughly researched, well-documented and clearly written and offers a very good and generally convincing picture of the historical aims and context of the Alexandra at the time of the rise of Rome in the early second century B.C. It is an important contribution to the scholarship on this difficult and intriguing poem and a worthy and welcome addition to Hornblower's earlier commentary.