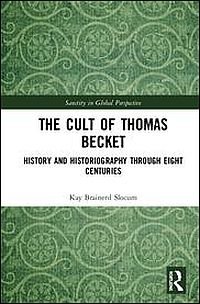 2020 is a momentous year for historians of the life, death and afterlife of Thomas Becket, the archbishop of Canterbury (1162-70) murdered in his own cathedral, an atrocity for which Henry II (king of England 1154-89) was widely blamed. As the 850th anniversary of Becket's death, and the 800th anniversary of the translation of his relics to their new shrine in Canterbury Cathedral, 2020 provides an opportunity for renewed historical interpretation and for public commemoration of these events.

In this context, a volume taking stock of scholarship about Thomas is timely. Kay Brainerd Slocum sets herself the daunting task of exploring over eight centuries of writing about Becket, his dispute with Henry II, his exile, subsequent return, martyrdom, and the development of the Europe-wide saint's cult that ensued. Slocum provides a thorough and engaging overview of interpretation, re-interpretation, framing and analysis of Becket that has played out, been reworked and frequently adapted to the political and interpretative concerns of different eras.

The strength of this study lies in highlighting the range of writing through which images of Becket have been presented, from medieval primary sources through the writing of antiquarian and professional historians, to the works of playwrights, librettists and novelists. In setting these in context, Slocum demonstrates how Becket has been adapted and constructed in accordance with prevailing political trends, debates, prejudices, and differing methods of interpretation across the history of writing about the man, his reputation and his veneration as a saint. She highlights three themes uniting commentary on Thomas over time: his character, and the perception of a "conversion" following his election as archbishop of Canterbury; the quarrel with Henry II; and his martyrdom, canonisation, perceived miracles and the development of his cult.

The book is divided into an introduction, four parts and a conclusion. In part one, five chapters explore the theme of saint and cult. Focusing on medieval evidence, this is concerned primarily with works of writers contemporary with Becket, often members of his entourage and others working in the generation after his death. They sought to compose sacred biography, creating the image of Becket as a martyr and saint, and also to recount the development and culmination of the dispute between king and archbishop. In doing so, "they have provided the basis for [all] Becket studies since their creation" (4) and developed three images that would prove recurrent in sympathetic commentary on Thomas: his status as a bonus pastor, a model to be emulated by his churchmen successors; his role as defender of the Church; and belief in his capabilities as a worker of miracles.

Slocum also highlights the range of evidence for Becket's cult and how sanctity affected interpretation of his life. Textual evidence became multi-lingual, as translation of Latin works into the vernacular brought Thomas to a wider audience. Important trends were again established, as "the image of the martyr was altered to reflect the preoccupations of a changing society" (43), allowing Becket to be constructed as a popular hero who identified with human suffering and who could be emulated by laymen and priests. The evidence goes beyond written lives, letters and miracle collections, to encompass liturgies and sermons, where the power of the spoken word could develop, sustain and emphasise symbols of what Thomas was seen to have stood for in life. Importantly, Slocum's discussion includes the rich material evidence for devotion to and depiction of Becket: manuscript illumination, reliquaries, pilgrim souvenirs, seals, stained glass, and architecture. The value of interdisciplinary approaches to this rich source material is rightly emphasised.

The remainder of the book concerns the interpretation of Thomas Becket after his cult was swept away by the Henrician Reformation. Parallel strands of hostile and positive writing were developed, sustained and reinvented in the context of the establishment of Protestantism, the Counter-Reformation and its effort to preserve Anglo-Catholicism, and the ensuing eighteenth and nineteenth-century debates and tensions between the two movements. In the second part of the book, two chapters cover the Reformation and Counter-Reformation. The efforts of the reformers to overturn prevailing perceptions of Becket - blaming him as a traitor to the crown - resulted in a negative view "maintained to a degree until the twentieth century" (143). Despite efforts to reinstate St Thomas in Mary's reign, by 1600 writing reflected a prevailing hatred, seen in biography, discourse and drama. However, for Catholics, the association between Becket and the pope was a powerful image, as were the themes of exile and martyrdom. Interest in and support for Thomas as a saint made him a focal point for English Catholics in England and on the Continent.

Part three considers eighteenth- and nineteenth-century views of Becket, firstly in the context of concepts of ideal government and society, to which Thomas was frequently considered a threat, although the Anglo-Catholic response drew on Enlightenment philosophy to argue that Becket shared the greatness of classical heroes. Moving into the Victorian era, Slocum discusses the influence of nationalism, including debate about whether Becket was Saxon or Norman. Reverence for science and the scientific method could be seen in the collation and publication of source material for the archbishop's life, death and supposed miracles. All this in a period in which most writers were Church of England clergymen, and the Anglican Church was riven by debate between movements advocating devotion more Protestant or Catholic in focus. The resulting publications "became vehicles for exploring the rights and wrongs of the struggle [...] in light of current issues and concerns" (216). They continued a trend for vilification or hero-worship of their subject, although there was recognition of the historical importance of the dispute and its main players.

Slocum's final section examines Becket in the modern and post-modern world. These three chapters acknowledge the continued influence of earlier trends such as nationalism (and at times hostility) in writing about Thomas and highlight the range of historical approaches that have developed since the professionalization of the discipline. Themes covered include the nineteenth- and twentieth-century focus on legal aspects of the controversy, including the study of canon law. In addition to considering twentieth- and twenty-first century biographies of Becket, these final sections also assess the influence of intellectual and social history, and psycho-history. Important developments included renewed study of Becket's contemporaries. His supporters and the bishops of Henry II's reign have been studied both in terms of psychological and intellectual history, and in recent attention to themes such as friendship. Analysis of Thomas now also includes sexuality, gender and masculinity, and the ritual behaviour and symbolism inherent in the actions of those involved in the dispute. Slocum's study ends by discussing the influence of medievalism, a field in which examples range well beyond historical writing. The final chapter reminds us that in the testimony of James Comey in the wake of his sacking by President Trump, and in the invocation of Becket as a symbol of European unity, the archbishop, the quarrel that led to his death, and his posthumous cult continue to be invoked in modern political contexts.

As might be expected in a study of historical writing, each chapter is accompanied by extensive notes, presented as endnotes to each chapter, informing the reader of the wealth of writing that the career and afterlife of Becket has inspired. It is perhaps surprising that the volume ends with a 'selected' rather than a complete bibliography. A full bibliography is something Routledge should consider for future editions, whilst a companion bibliography online would provide an invaluable and updatable resource for historians. Further editions might also correct a number of typographical errors in the text.

These minor quibbles aside, this is an important and timely book. Slocum's comprehensive approach to identifying works on Thomas Becket written across the 850 years since his death provides a thorough grounding for anyone interested in the development of the subject over time. The book thoroughly assesses historians and their work, analysing approaches, precursors and how writers have used, prioritised and commented on the sources. In providing such a broad-ranging overview, the Cult of Thomas Becket will be essential reading for scholars and students alike.