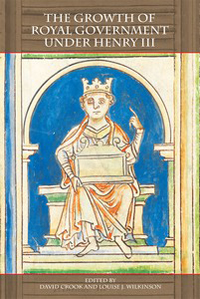 From 2005 to 2011, the Henry III Fine Rolls Project, funded by the Arts and Humanities Research Council, UK, examined the surviving Fine Rolls from the reign of King Henry III of England, 1216-1272. These record money offered to the king for specified concessions, often adding the schedule for payments and recording letters relating to the fine or to wider financial administration. The rolls themselves were edited, translated, and published online.[1] In June 2011, a project conference was held at King's College London. The majority of these papers, with additional contributions from Charles Insley and Nicholas Vincent, are published in this volume.

Following a short introduction overviewing the reign, the workings of royal government and the records that it generated, the papers are divided into two sections. The first of these 'Records and their Uses', examines "the practice and purpose of record-keeping in Henry III's England" (4). David Carpenter highlights how the Fine Rolls reveal the interconnection between the centre and the localities. The process of fining gave knights experience of the royal court, meaning that they felt the effects of the king's disastrous foreign policy (which had led Henry to seek revenue through fines) whilst exposing the dominant role at court of advisers from overseas. The record sheds light on underlying tensions that contributed to the attempted reform of royal government that began in 1258.

Contributions by Paul Dryburgh, Paul Brand, and Tony Moore emphasise how the Fine Rolls can be used in combination with other sources, such as the Originalia Rolls (heavily abridged extracts from the Fine Rolls, increasingly augmented with additional information from elsewhere, periodically passed from Chancery to Exchequer to show what was due to be collected) and judicial records. Moore argues that the Fine Rolls reveal the expansion of royal justice under Henry III. His detailed statistical analysis demonstrates the scale with which new cases arrived in the king's courts, suggesting a conscious change of government policy, and dramatically expanding the business of the royal court. This trend was driven by demand from litigants themselves.

The section then broadens to consider the wider context of the British Isles. The Irish Chancery never produced its own Fine Rolls because, as Beth Hartland concludes, there was simply not enough business to warrant a new class of document. However, the process of fining can still be reconstructed from other sources. Meanwhile, Alice Taylor and Charles Insley challenge accepted views of English influence on Scottish and Welsh documentary practice. By focusing on differences between record-keeping methods, they reveal that sources were produced in different ways and responded to the priorities of the Scottish and Welsh rulers concerned. In Scotland, by contrast with England, the situation was "mobile, fluid, and regional, rather than fixed and universal" (87). Meanwhile, Insley's careful analysis of surviving acta from Wales from the century prior to the Edwardian conquest reveals a striking degree of initiative amongst Welsh princes and their clerks, who pursued their own agendas, framed their own concepts of identity and authority, and preserved earlier diplomatic practice, seen in the boundary descriptions included in their charters.

The second section, 'Government in Action' examines wider aspects of royal government. Chronologically, the ordering is somewhat haphazard - we move from the minority and early part of the reign, to the aftermath of the Battle of Evesham of 1265, back to the late 1250s and early 1260s, and on to papers that range across the reign, or up to around 1250. Nonetheless, valuable conclusions are again presented.

The process by which Exchequer authority was restored in the wake of civil war is considered by Nick Barratt, in the context of Henry III's minority, and by Adrian Jobson, in relation to the period after the collapse of the baronial reaction of the early 1260s, whilst Scott Waugh's extensive discussion of the origins of the office of escheator reveals the extent to which royal government experimented in its efforts to successfully administer the king's income from feudal incidents (lands of wards and widows, for example). All three papers reveal the scale of the task, and the persistence of the government offices involved, with the Fine Rolls contributing invaluable evidence when used in combination with other Chancery and Exchequer sources.

Also in this section, David Crook reveals how the much criticised St Alban's chronicler Roger of Wendover "represents the only recorded authentic voice of the forest landholder subject to the restrictions on agriculture imposed by the forest laws" (177), whilst Louise Wilkinson challenges traditional assumptions about the place of women in the government of thirteenth-century England. It was not unusual, she establishes, for heiresses to transmit claims to office to their husbands and sons, whilst a number of women were active as sheriffs under both Henry III and Edward I, with others serving as castellans, or exercising political power through the administration of the forest.

Of particular interest to this reviewer are the papers by Nicholas Vincent (in the first section) and Philippa Hoskin (in the second). Vincent provides an edition and discussion of an inventory recording gifts to Henry III in 1234-35.[2] Records were kept of gifts presented to the king by courtiers and envoys, and their redistribution, suggesting a resource that was not unlimited. The roll considered here is the first surviving example of this type of Wardrobe account, to be used for audit at the Exchequer. Its significance lies in what it tells us about Henry III's dealings with other powers, and in showing how record-keeping can reveal evidence for the king's devotion to the saints, for the liturgical year observed at court, and even for the king's fear of thunderstorms. Vincent highlights that such examples tell us much about the aura that gifts and gift-giving conferred on the royal court.

Meanwhile, Hoskin focuses on debate about canon law and kingship in the years 1257-61, leading to the creation of statutes for the English Church which were presented to the pope (but, thanks to royal lobbying, not ratified) in 1261. This was one part of a longer "crisis in attempts to demarcate the line between secular and ecclesiastical law" (196). The king was not prepared to compromise, and Hoskin makes the important point that Henry held, and stuck to, his own view of the obligations inherent in the office of king. Both sides believed that their view of the correct balance between secular and ecclesiastical power held primacy, and both asserted that they had the right to determine where the border lay.

This volume sets out to strengthen "our understanding of the processes, machinery, mechanisms and personnel of Henrician royal government and its record-keeping practices" (6). It is a promise on which it delivers. Many of the papers put the Fine Rolls at the heart of their discussion, but wider context is not neglected. This book will prove a valuable resource for both students and established scholars of the reign of Henry III. Its achievement - and the wider value of the Fine Rolls project - lies in further establishing and contextualising how the combined use of the different elements of the surviving archive reveals the inter-connection between different parts of government. In offering new interpretations of the era between Magna Carta and the emergence of the parliamentary state, this book establishes how the turbulence of Henry III's reign was caused not because the political community found itself isolated from royal government, but because its exposure to and involvement with the mechanisms of that government gave it a very clear sense of what the king was trying to achieve, of what was going wrong, and of how reform should be achieved.