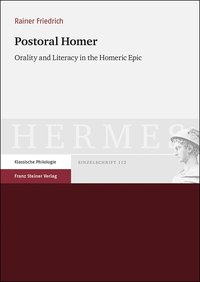 Nearly 100 years ago Milman Parry argued that the Homeric poems are composed in a traditional diction designed to facilitate oral composition. It is a remarkable testament to the enduring significance of his work that, nearly 100 years later, his ideas continue to provoke debate. Rainer Friedrich's most recent book is a sustained critique of Parry and of "Parryism." [1] Friedrich's aim is to demonstrate that the Homeric poems are not the product of purely oral composition, as the "Parryists" would have it, but instead reveal an "artistry" that can only be attributed to a composer who has acquired alphabetic literacy, and whose very conception of epic has thereby been fundamentally altered. The book is openly polemical. Far from seeking to engage his opponents in dialogue, Friedrich seems to have given up all hope for the "hyperoralists" and "superoralists" who continue to hold to Parry's views; they are said to be "willfully blind" to the flaws of their theory (131). Since I would undoubtedly be classed by Friedrich among the "superoralists," I can only assume that I am not one of his intended readers. Nevertheless, I found the book to be thought-provoking, though flawed.

The book is divided into two parts. Part I provides Friedrich's critique of "Parryism." He begins by surveying the elaboration and modification of Parry's ideas by various scholars, including Lord, Kirk, Nagy, Janko, Taplin, Foley, and others. For Friedrich, the diversity of views advanced by these scholars does not indicate the productivity of Parry's approach, but rather "reveals Parryism as permeated by irreconcilable divisions" (36). After comparing an oral poetics (which he claims to have been the first to systematize) and the Aristotelian poetics to which the Iliad is said to conform, Friedrich examines four "tests of orality" derived from Lord's work, the "formula," "economy," "enjambment," and "thematic" tests. On each of these dimensions, by Friedrich's accounting, the Homeric poems exhibit a mix of oral and literate elements. Friedrich provides a useful survey of various definitions of the formula, although his characterization of developments in the theory of the formula as the progressive loosening of the definition in order to boost apparent formula density in Homer and so compel the poems to pass the formula test (83) is unwarranted.

In Part II Friedrich offers his "Theory of the Postoral Homer," presented as an extension of the position taken by Adam Parry in his 1966 essay, "Have we Homer's Iliad?" [2] Friedrich begins by arguing that literacy was well enough established in late-8th century Greece to support the hypothesis of a literate Homer. Friedrich then reviews evidence for "postorality" (i.e., literacy). Referring the reader to his earlier work on formulas and enjambment, he points first of all to "non-schematized free composition" (composition unconstrained by formulaic patterns), which is said to be the "main textual reality in Homeric diction" (187), and which reaches its apogee in similes. Also indicative of "postorality" are "artistic," as opposed to merely routine, uses of formulas or type scenes, especially when these establish Fernbeziehungen or "far-range references" between different parts of a poem. (The argument from Fernbeziehungen will be familiar to readers conversant with the debates over Homeric orality.) Friedrich provides several welcome examples of such "artistic" implementations of formulas and themes, and here his talents as an exegete truly shine; his readings of particular passages are without exception illuminating. He stresses how these examples contribute not just to large-scale structural patterns but also to characterization and concludes by framing his model of Homeric postorality in terms of the quasi-Neoanalytical hypothesis that Homer composed two Iliads. First, as an oral poet, he composed a "chronographic" epic encompassing the entire Trojan war; then, after acquiring literacy, he used his oral composition as the source for his "dramatic" Iliad (220). Echoing the position taken by Adam Parry in "The Language of Achilles" (not explicitly cited), Friedrich characterizes this dramatic Iliad as "revealing the limited validity of the heroic code" (241). [3]

Friedrich's book makes some important points. Apart from the close readings in Part II, the book's most important contribution is its demonstration that, measured in terms of formula usage, the Homeric poems are not uniform in style. But the strict binary in terms of which Friedrich aims to explain this non-uniformity - the "orality and literacy" of his subtitle - is inadequate on two counts.

First, Friedrich's notion of orality is woefully uninformed. He shows no direct knowledge of any oral tradition and, apart from a few works by Parry, Lord, and Foley, does not engage with scholarship on oral traditions. The sole example of a genuinely oral poem he cites is Avdo Međedović's Wedding of Smailagić Meho, the most famous text in Parry's collection. But Međedović's Meho is most emphatically not typical either of his tradition or of his practice as a singer. [4] Međedović produced this text under extraordinary circumstances to fulfill Parry's demand for the longest, most 'ornamented' text he could manage, which goes a long way toward explaining the "schematization" and reliance on catalogs decried by Friedrich. Nor can Međedović's simile technique be taken, as it is by Friedrich, as typical of oral poetry in general. Friedrich would have benefited from consulting J. L. Ready's recent book The Homeric Simile in Comparative Perspectives. [5] And anyone conversant with genuine oral poetry would contest Friedrich's repeated assertion that oral poetry is necessarily devoid of "artistry."

And yet it remains true that the Iliad surpasses many oral texts in the complexity of its structure and narrative technique. Is the advent of literacy the best way to explain this complexity?

The second weakness of Friedrich's model is that it posits only two factors, orality and literacy. (Friedrich asserts that "postorality" constitutes a needed "third term" (159), but this is hardly true, since "postorality" for him is simply the coupling of oral and literate elements.) Friedrich offers no explanation for why the acquisition of literacy should have prompted Homer to reconceive his epic. Is it not more likely that the radical shift posited by Friedrich should have been conditioned by institutional factors (the rise of regulated, prestigious performance contexts and the organization of performers into controlled professional organizations) than by one man's learning to write? The advantage of Nagy's evolutionary model (roundly criticized by Friedrich) is that it takes just such an institutional approach in explaining the origin of the monumental Iliad. In this model, institutions serve as a genuine "third term," which is indeed much needed to break the impasse of the orality / literacy dyad. [6]

[3] A. Parry: The Language of Achilles, in: Transactions and Proceedings of the American Philological Association 87 (1956), 1-7.

[4] Points stressed by Z. Čolaković (Avdo Međedović's Post-Traditional Epics and their Relevance to Homeric Studies, in: Journal of Hellenic Studies 139 [2019], 1-48), who views both Međedović and Homer as "post-traditional." Čolaković's arguments are themselves flawed - I offered criticism of an earlier presentation in D. F. Elmer: Kita and Kosmos: The Poetics of Ornamentation in Bosniac and Homeric Epic, in: Journal of American Folklore 123 (2010), 276-303 - but Čolaković is right to point out (4) that Meho is not typical of its tradition.

[6] In the interest of full disclosure, I should state that Gregory Nagy supervised my Ph.D. dissertation and is a valued colleague.