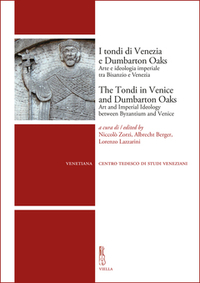 I tondi di Venezia e Dumbarton Oaks investigates two marble tondi from Venice, one still in Venice, the other sold to Berlin in the 1840s and later to Dumbarton Oaks. The eight chapters of the book go back to a conference held in 2015 at Venice and Dumbarton Oaks and discuss iconographical, material, technical as well as interpretative issues related to the two bas-reliefs. In addition, topics of conservation, literary sources, technique and style are being addressed. Originally, the specialist engagement with the tondi was prompted by the bad state of conservation of the piece in Venice, still exhibited in the open, inserted into the wall of Campiello Angaran, Dorsoduro, nr. 349.

Venice is the city of Western Europe longest to have continued a close cultural and political relationship with the eastern Roman Empire. This relationship is visually attested by a number of works of art from classical and late Antiquity looted by the Venetians during the Fourth Crusade and taken back after the Fall of Constantinople in 1204. Many of these pieces subsequently became key objects of Venetian identity such as the bronze Quadriga above the central entrance to Saint Mark's Church or the porphyry Tetrarchs on the basilica's corner towards the Doge's Palace.

As "another" Rome but without an ancient past, Venice had to find a way to create an appropriate identity and Byzantine pieces whether from Constantinople, from Aquileia or made in Venice were welcome for reuse in churches and palaces. In many cases, including the two sculptures set on columns in the piazetta - San Teodoro and the Lion of Saint Mark - elements came from the eastern Mediterranean and experienced modifications over the centuries. Out of their original context, they could either be pieced together from diverse ancient spolia (Saint Theodore) or be separated from a monument to become (with wings added) the symbol of a Christian saint (Lion). In such cases, it is difficult to trace the (multiple) provenances beyond proposing possible origins from Asia Minor or the Near East.

Trade, war, but also marriages between doges and Byzantine aristocrats kept Venice closely linked to the Eastern Mediterranean. Even though there may only have been the marriage between Giovanni Orseolo and Maria Argyropoulaina in 1004, Venetian merchants dominated the exchange with Byzantium up to the Fourth Crusade on the basis of a treaty that offered the support of the Venetian Navy in return for commercial privileges. The ensuing growth of the city's wealth prompted the construction of Saint Mark's church in 1063.

As the conference papers show, the origins of the two tondi are unknown and wide open to speculation. Apparently, we cannot tell when they were created nor do we know when they arrived in Venice, for example as part of the booty of 1204. Since their depictions are closely related but not entirely identical, it is possible that the piece from Campiello Angaran could be a much later (free) copy of the tondo at Dumbarton Oaks. In theory, either could have been part of a larger monumental group (or of two such groups), consisting of a central relief flanked by two tondi with a depiction of Christ between them (in the manner of Figs. 38-39). Indeed, the existence and style of the two tondi pose more questions than the essays are able to answer.

The bas-relief now at Dumbarton Oaks, while ostensibly being the better documented, was sold to Berlin to Prince Carl of Prussia who would display it in the so-called "Klosterhof" of Klein-Glienicke between Berlin and Postdam. The Klosterhof was meant to represent a Byzantine chloister and contained many imported pieces from the island of Certosa. The tondo is documented by an etching by Bernhard Mannfeld from 1878 but was displayed from an earlier date. It may originally have come from Certosa or from Acre, while its site of production may have been in Venice or Constantinople. In 1937, it was acquired for Dumbarton Oaks where it still resides. The Angaran relief however is documented by Giovanni Grevembroch's water-colour dating to 1764 which shows it inserted in the wall of a house near S. Pantaleone on Dursoduro, its present location (see: https://wwwbisanzioit.blogspot.com/2013/04/il-tondo-angaran_20.html).

Equally uncertain is the identity of the "sitter(s)" portrayed on the two tondi. Several Byzantine emperors were proposed over the centuries and at the conference; Isaak II Angelos or his brother Alexios III Angelos as well as Alexios I Komnenos and John II Komnenos, or Venetian Doges, might have been depicted. Since imperial portraits were supposed to be publicly displayed in all regions of the Byzantine Empire, one might also expect that they were frequently produced, in particular at times of crisis and of a high turn-over of rulers. Succession crises may also have been at the root of a type of portraiture that included every kind of power symbol and an exaggerated mixture of dress codes used for legitimisation. Could a long mantle really have been worn over a crossed loros to overcompensate for a lack of dynastic claims? Is the particular dress style perhaps an indication of Theodoros II Komnenos Doukas, despot of Epiros, being portrayed on the tondi.

In the volume, no conclusive agreements between the authors can be reached. There is however an intriguing presentation of possibles that encourages the further exploration of the chapters' main topics. Unfortunately, at the beginning some pages are bound out of sequence, but that can easily be overlooked considering the book's high level of interest.