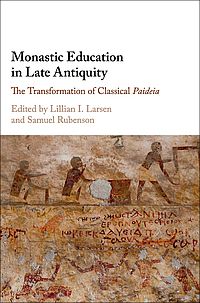 This fifteen-essay collection constitutes a ground-breaking study of the relation of Egyptian monastic culture to classical culture in the late and post-Roman East. Originating from an international conference on monastic education held at Lund University in 2013, it presents the fruits of the "Early Monasticism and Classical Paideia" research program run from 2009 - 2015 by the editors, Lillian Larsen and Samuel Rubenson. As stated in their introduction, the main purpose of the volume is to demonstrate how classical practices and ideals continued to be used in monastic pedagogical settings, "vigorously arguing against models that have often depicted Christian, and more specifically monastic, thought as inherently antithetical to Classical culture" (3). The book makes clear that the traditional understanding of monks as illiterate, uneducated peasants who rejected the basic norms of classical education is a misconception derived from an acceptance of polemical and romantic literary depictions. It does so primarily by examining the realia of early monastic pedagogy. Ranging from papyri transcripts of teacher-student discussions, to writing exercises scratched on ostraka and the walls of Pharaonic tombs, to philosophical treatises and manuscripts preserved in Greek, Coptic, Syriac and Arabic, this evidence either sheds light on monastic teaching practices or reveals the reworking of edifying material by students over time. The volume also illustrates the degree of technical expertise that is needed to access this relatively humble level of late antique culture in detail. Its editors must be commended for recruiting such specialists and for advancing our understanding of both early monasticism and classical culture.

The book is divided into five parts, each comprised of two or three essays. Part I, "The Language of Education", focuses on literary representations. It starts with a discussion by Samuel Rubenson of Henri Marrou's omission of monasticism in his influential history of classical education and explains various ways in which monasticism fit into common patterns of late antique schooling. Peter Gemeinhardt then explores the depiction of Antony the Great in Greek and Latin hagiography to explain how this learned early hermit came to be portrayed as an illiterate, especially in Latin tradition. Andreas Westergren then shows how the fifth-century historian Socrates' portrayal of monasticism in the Eastern Roman Empire reflected contemporary political ideals by dividing the monastic population between an educated elite and a mass of illiterate commoners.

Part II, "Elementary Education and Literacy", examines papyri and ostraca to determine actual levels of education. This begins with Roger Bagnall's examination of papyri letters to conclude that their monastic authors manifest training similar to that of members of the provincial bureaucratic or business class. Lillian Larsen follows by suggesting that modern archaeologists and editors have obscured the subject by incorrectly categorizing the artifacts of monastic education. Anastasia Maravela then explores evidence for familiarity with commonplaces from Homer and Menander in Egyptian monastic settings. All these essays make a strong case that elementary monastic education in Egypt generally followed classical models.

Part III, "Grammar and Rhetoric", musters evidence for monastic use of classical pedagogy at more advanced levels. Blossom Stephaniw and Ellen Muehlberger show how two famous fourth-century Greek monks, Didymus the Blind and Evagrius Ponticus, adapted for Christian instruction certain formal methods of classical rhetorical training, albeit substituting classical figures with scriptural characters or motifs. Mark Sheridan then considers evidence for similar use of classical rhetorical models in the Coptic homilies of Rufus of Shotep, revealing that they persisted in Egyptian monastic settings at least to the seventh century.

Part IV, "Philosophy", examines the impact of an even higher level of classical education on monastic pedagogy. Henrik Rydell Johnsén explains how the early monastic emphasis on cultivating virtue over elite liberal arts training mimicked a stance taken by Epicurean and Cynic philosophers. Arthur Urbano then suggests methods by which the fifth-century hagiographers, Bishop Theodoret of Cyrrhus and the philosopher Marinus of Neapolis, each differently sought to appropriate the mantel of Platonic tradition through depictions of their respective Christian and Neo-Platonic exemplars. This is followed by Daniele Pevarello's study of the reuse of the second-century collection of gnomic sayings, the Sentences of Sextus, showing how this classical text transplanted pagan philosophy into monastic settings so successfully that it later became ascribed to a Christian bishop.

Part V deals with evidence from textual transmissions. Britt Dahlman argues that certain monastic texts (the Historia Lausiaca and Cassian's Institutiones) may have been revised by their authors for different audiences, a practice evinced for classical texts going back to Cicero. Hugo Lundhaug and Lance Jenott analyze the colophons of the Nag Hammadi codices and argue that these were produced for a monastic milieu. The volume ends with Jason Zaborowski's study of an early Arabic version of the apophthegmata patrum to reveal how this classic monastic text was adapted by translators to fit into a new cultural setting.

One notable strength of this volume is that each contributor refers to one or more of the other essays, giving the work a general coherence that is often lacking in such collaborative efforts. It should be added that its title suggests a more general treatment of monastic education in Late Antiquity than the contents deliver. The contributions deal almost exclusively with monasticism in Egypt, and non-specialists might have appreciated a final chapter more broadly summarizing how monastic education adhered to, and transformed, classical paideia. But this book provides scholarship that make accurate generalizations finally possible, and specialists will welcome it.