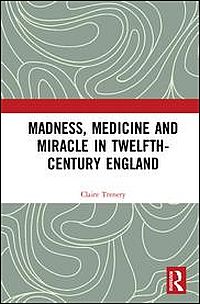 As puzzling as it may be, madness represents a significant phenomenon in all of human history, and both the Church and philosophers, both medical practitioners and poets have engaged with it in a variety of ways. What are the differences between prophets and mad people, between the latter and mystics? Peter Dinzelbacher now argues rather strongly that much of medieval mysticism and visionary experiences would have to be read as some kind of hallucination, delusion, and mental derangement. [1] Andreas Brenner pointed out that the history of philosophy was deeply determined by the bifurcation of madness and rationality and that the difference between the genius and the mad person has always been rather tenuous. [2] What constitutes rationality, and what is, perhaps, a divinely inspired experience? Is not, possibly, true art an expression of madness, and are not most religious visions somehow related to madness? How much would we have to perceive madness as the result of excessive energy overpowering the individual, an energy that comes from outside of the individual? In Old Norse Sagas we often hear of berserks, obviously mad people, but they were much admired or feared. It seems rather overly theoretical to relegate madness to a social construct, as Michel Foucault wanted to see it, and other attempts to come to terms with it continue to suffer from weak theoretical, medical, religious, and philosophical foundations. [3]

The present study by Claire Trenery, based on her doctoral dissertation defended at Royal Holloway, University of London in 2016, is more narrowly focused, studying the relevant sources from twelfth-century England in which we are informed about the impact of saints and/or their relics on the treatment of mad people. She predicates her study on the assumption that madness "makes ... no sense, and hence poses problems of communication and of common meaning" (5), as defined by Ann Craig in her article "The History of Madness" in History Compass 12 (2014). True, most people cannot understand madness, but lack of rationality does not necessarily imply lack of understanding globally. But this issue cannot be answered easily, and Trenery does not invest much more energy or space into this either, leaving us puzzled why she relies so much on Craig's position. Instead, she looks at the way how mad people were allegedly healed in a miraculous fashion by Saint Edmund the Martyr at Bury (chapter one; the earliest collection), William of Norwich (chapter two), Saint Thomas Becket (chapter three), Saint Bartholomew in London (chapter four), and Saint Hugh of Lincoln (chapter five).

By comparing the various miracle accounts, the author succeeds in identifying different approaches to madness, which was either recognized as God's punishment of sinners and their transgressions against the saint (Saint Edmund the Martyr), or as a medical condition which could be healed only through the saint's intervention (Thomas Beckett), especially in those cases when madness turned into violence. Dealing with mad people (of both genders, of every social class, and every age level) also served some of those saints to fight a spiritual battle against demons and the devil, such as in the case of Hugh. In some cases, a king's evil deeds or wrong behavior was blamed on his mad advisors, as we observe this in Adam of Eynsham's Magna Vita Sancti Hugonis.

As the large number of miracle tales clearly signals, medieval society was fully aware of madness as a terrible sickness or mental derangement. Consequently, the differences between really mad people and mystics, visionaries, prophets, and seers are so strong that it seems rather questionable to place them into a category comparable to those suffering from madness. [4] The authors of the miracle narratives normally stayed away from using medical terms for madness, although new medical research resulting from much scientific activities at the university of Salerno also addressed the etiology of insanity by the end of the twelfth century.

As Trenery rightly concludes, these English miracle collections increasingly addressed madness and utilized it as a vehicle to demonstrate the respective saint's power and influence in healing the afflicted. The various saints' cults influenced each other and gained inspiration from earlier sources, especially those tales pertaining to Thomas Beckett.

The author deserves high credit for her excellent analysis of those accounts about mad people and their miraculous healing through the various saints. She carries out close readings of the miracle tales and produces convincing results. The historical context is somewhat missing here since it remains unclear whether there was a growth of mental illness at the end of the twelfth century, or whether hagiographical authors increasingly realized the effectiveness of miracle accounts regarding mad people for the glorification of the saints. It would have been rather useful to contextualize those miracle narratives in comparison with secular literature, including Arthurian romances.

I greatly dislike the structuring of the individual chapters with their apparatus appended right there, meaning, each chapter is followed by very abbreviated notes, and then the full bibliography, whereas a complete compilation of all research literature is missing. This requires much leafing back and forth and makes it difficult to assess the actual research quality of this study. Thankfully, there is a solid index, with the crucial pages printed in bold. Granted, Trenery has covered most of the relevant research pertinent to her sources and topics, but she could have expanded her perspective to include also some continental material. [5]

[4] For a modern psychoanalytic and psychiatric perspective regarding medieval cases of mysticism, cf. Dinzelbacher, op. cit., and see my review in: Mediaevistik 33 (2019), forthcoming.

[5] See, for instance, Albrecht Classen: Madness in the Middle Ages, in: Hermeneutics of Textual Madness, vol. 1; see above.