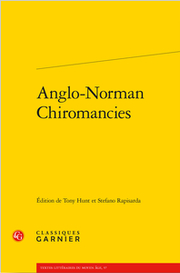 Chiromancy, or divination, is not really magic, has nothing to do with the devil, but it is a method to predict the future by reading the palm, certainly an art which is practiced until today, though it is regarded with much suspicion, if not contempt, at least by scientists. However, already in the Middle Ages, if not much earlier, chiromancy and similar arts were commonly practiced and received much attention also by the members of the learned elite. Famous theologians and philosophers such as St. Augustine, Isidore of Seville, Gratian of Bologna, and John of Salisbury intensively engaged with it, either in support of it or in strong opposition. There were many other forms of divination, including the rather unusual sparulomancy/scapulomancy (reading of the shoulder blade).

John of Salisbury vehemently condemned all those arts, but he could not prevent their continuous popularity throughout the ages because people have always desired to predict the future out of deep fear of the ominous nature of what might come into existence without the individual's control. Chiromancy was also practiced in the Byzantine period, such as by Julius Pollux or the author/s of the monumental encyclopedic Suida, and both Hebrew and Arabic scholars were much dedicated to this art as well.

Before 1400, only few vernacular manuals of divination existed, and most of them are those in Anglo-Norman, primarily promoted by the Plantagenet court, as illustrated best by the efforts in that regard by Peter of Blois. In order to help us understand this unique situation better and to provide access to those texts, Tony Hunt and Stefano Rapisarda here present the following manuals: 1. the Chiromantia contained in the Eadwine Psalter, MS Oxford, Balliol College 285; 2. the Chiromantia Parva, MS London, British Library, Additional 18210; 3. the vernacular version of the Dextra Viri, MS Cambridge, Trinity College, 03.45; and 4. the vernacular version of the Palmistria Salomonis, MS Cambridge, Trinity College, 0.2.5. The editors also briefly refer to a lost Old French chiromancy, which was contained in MS Turin, Biblioteca Nazionale, M.IV.11, but burned in the fire of 1904. The volume concludes with a select glossary of technical terms, the bibliography (with a separate list of manuscripts), and a very short subject index.

Most importantly, the texts are accompanied by the illustrations contained in the manuscripts; the Chiromantia Parva, like the other manuals included here, appears both in its Latin (left page) and Anglo-Norman version (right page). The editors provide helpful introductions to each treatise and extensive notes at the bottom of the pages, but they hardly reveal anything about the possible dates of those treatises. Overall, this is an excellent though thin anthology of relevant texts from high and late medieval England.

It would have been helpful, however, if the editors had widened their perspective somewhat and had also referred to Continental treatises, and then to those which were created in the late Middle Ages and the early modern period, such as the ones by Johannes Hartlieb and Johannes Rosenbach (B. D. Haage, W. Wegner: Deutsche Fachliteratur der Artes in Mittelalter und Früher Neuzeit, Berlin 2007, 294). At least the Introduction could have included some relevant references. Nevertheless, the virtually exclusive focus on Anglo-Norman chiromancies is fully understandable; they were relatively wide-spread at the British court and elsewhere, but not on the Continent.