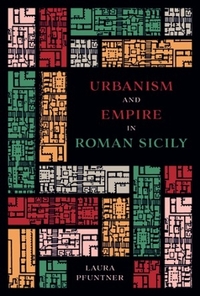 Almost thirty years have passed since the publication of the well-known Sicily under the Roman Empire by Roger Wilson (R.J.A. Wilson, The Archaeology of a Roman Province 36 B.C.- A.D. 535. Warminster: Aris and Phillips, 1990), which still represents a pivotal book for the knowledge of Roman Sicily. Since then, new studies and field research as well as bibliography on this subject have grown exponentially, so that a comprehensive and updated overview appears today a no longer delayable task. The book by Laura Pfuntner, resulting from her doctoral thesis at the University of California, Berkeley (2013), undoubtedly presents itself as an excellent candidate to fill this gap, as one can appreciate already from the enormous and almost complete bibliography, which appears at the bottom of the volume.

As already declared in the title, the volume actually focuses on a single aspect of Roman Sicily, that of urban centres and their transformations from the Late Republic throughout the Imperial Age: for Sicily, where the urban phenomenon has a centuries-old tradition, this is by no means a secondary aspect. Methods and criteria of analysis are clearly defined in the long and meaningful introduction: in particular, I find it hard not to share the author's statements regarding first of all the need to relativize the concept of urban settlement in relation to the historical and geographical context in question, therefore avoiding to evaluate phenomena of development or decline on the basis of pre-established formulas. On the other hand, Pfuntner appropriately insists on the need to examine changes in consistency and nature of urban settlement in Sicily in a mainly local perspective and as complex processes, in which environmental, economic and political factors - both internal and external - interact with different results from time to time.

In keeping with these criteria, the first five chapters are devoted to a careful examination of individual case studies chosen from the vast number of Sicilian cities of the Hellenistic and Roman periods, depending on the greater or lesser amount of available data. The order chosen by the author effectively reflects the absence of uniformity, both chronological and geographical, which characterizes the processes of decline or development of urban phenomena in Imperial Sicily. The analysis therefore starts from centres abandoned between the Late Republic and the Early Principate (Heraclea Minoa, Phintias, Morgantina, Camarina, Ietas, Calacte) or between the first and middle Imperial age (Soluntum, Segesta, Halaesa), to then continue with the discussion on the regions of the island experiencing phenomena of growth of the urban phenomenon in the Imperial Age: Lilybaeum and Agrigentum; Tyndaris and Tauromenium; Centuripae, Catina, Syracuse. For each of the selected case studies the author offers a very accurate reconstruction of the respective urban history up to the latest archaeologically documented phases of life, making use of a wide range of sources and with constant attention to the relationship between the urban centre and the territory. In themselves, these small "monographs" represent a significant contribution, albeit with some omissions of recent acquisitions (for example, on the chronology of the urban layout of Heraclea and Agrigentum) or some imprecision regarding the sculptural cycle of the so-called Basilica of Tindari (dated shortly after the deduction of the colony, while it is probably of the Julio-Claudian era) or the so-called Naumachia of Tauromenium (connected tout court to the Imperial cult but without strict evidence). But certainly these and a few other inaccuracies do not invalidate the general value of the reconstruction proposed by Pfuntner, which identifies case-by-case the possible concomitant factors, responsible for the decline/abandonment or growth of cities, rightly emphasising the importance of the local ruling classes and their incidence both in the development processes or, at least, in maintaining the urban monumental apparatus, and, vice versa, in the phenomena of disintegration of the urban fabric. What emerges is a much richer and more articulated picture than that elaborated by the historiography of past decades, still anchored to a narrative on Roman Sicily mainly based on dichotomic formulas such as city-countryside, urbanization-ruralisation, which Pfuntner appropriately stigmatises several times.

The main focus on local dynamics as responsible for the transformation of Sicilian cities is undoubtedly an important contribution that Laura Pfuntner has given to our understanding of these phenomena. However, one cannot help but wonder if this approach does not risk overshadowing the impact of Imperial policy decisions, especially in some key moments in the history of the island. I refer above all (but not only) to the new hierarchical organization of Sicilian cities established by Augustus, of which Pfuntner rightly recognizes the full weight on the subsequent history of Sicilian urban centres. The author discusses it several times in relation to the individual centres examined and, with regard to the Augustan colonies, in such optimistic terms that do not seem to be fully adequate to Augustus' actual intentions behind the deduction of the Sicilian colonies, according to what has also been highlighted by several recent contributions. Probably a unitary discussion on the real meaning of the Augustan reform would have usefully supplemented the picture traced by the scholar.

However, these observations do not intend to minimize the value of the book by Laura Pfuntner, in which scholars of ancient Sicily will be able to find numerous stimuli for further research developments, but which at the same time can satisfy the interests of a wider public of readers.